Microsoft Band catches up with keyboard, cycling, and SDK

You could be easily forgiven if you’ve forgotten, or more likely didn’t know, that Microsoft just launched it’s own smart fitness band. The company itself didn’t make such a big fuss out of the Microsoft Band and it was probably smart to do so. The initial experience that we got from our review of the device was nothing to write home about. At least not yet. That was just the beginning, however, as Microsoft is now rolling out a bunch of updates, as well as an announcement, that could turn its first wearable into more than just a flawed promise.

First off, the Microsoft Band now has a dedicated cycling tile. In this mode, the stats and sensors are tuned to take into account that you’re riding a bike and not just running. You still get your usual GPS tracking, calories burned, duration, distance, etc. But you also have new ones like heart rate for cycling and elevation. You even get new download new cycling-based workouts.

A rather strange new feature is a keyboard. Smartwatches, which have a bit more spacious screens, are usually touted to be unfit for keyboards. And yet Microsoft saw it fit to squeeze in its WordFlow (the one with swipe typing) into the elongated 1.4-inch screen of the band. This will allow you to do something most smartwatches don’t allow: replying to messages by typing. Of course, you could also use your voice to reply but only if you’re Band is paired with a Windows Phone 8.1 device with Cortana present. 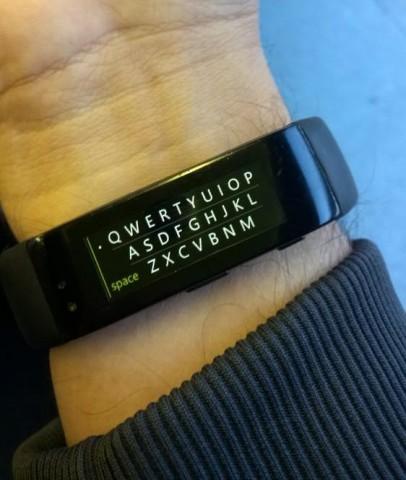 Beyond the device itself, Microsoft has also updated its web-based Health portal to give more insight into the user’s overall performance and stats. While a nice step forward, it’s actually only half a step. For now, it only shows your own stats, unable to compare it with others for reference. It is also limited to the Health web dashboard and isn’t even available on Microsoft’s own Health smartphone app. That, however, may come in the future. Whether it becomes available on other platforms is still unknown.

But perhaps the biggest news of all, which may turn the Microsoft Band into a worthwhile contender in the market, is the announcement of a Band SDK. Though still in preview today with more information coming later, the SDK ultimately opens up the device to more use cases and to more services. Best of all, the SDK isn’t just for Windows Phone but also available for Android and iOS. Now to wait and see if this will prove true the adage that if you build it, they will come.