Inspiration or desperation? Whatever the motivation, Microsoft seems to be kicking its OneDrive campaign into high gear. Last week, it dangled the carrot of 100 GB of free cloud storage for two years in order to get people to sign up for Bing Rewards. This time, it’s making a slightly different offer to entice Dropbox users to make the switch. And this time, for those who were irked by the limitations of the previous offer, the free space is available for anyone in the world to claim.

The promo is quite simple really. If you are a Dropbox user, simply sign into OneDrive or create a new account and let OneDrive send a file to your Dropbox account as a test that you are indeed a Dropbox account holder. Once successful, you get 100 GB of space, no questions asked. The one caveat is that the space only lasts for 1 year, unlike the Bing Rewards version that will expire only after 2 years. 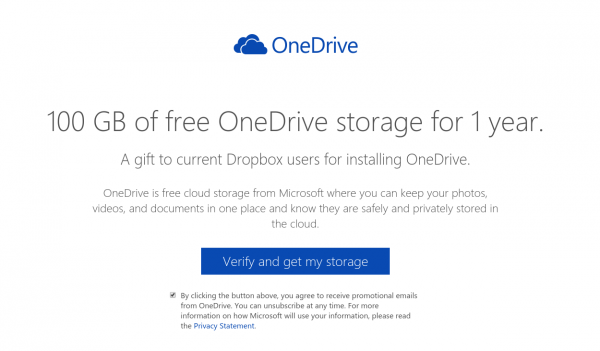 While tasty, this offer might leave a bad taste in mouth of some, as it does seem a bit like poaching users of competing services. The Bing Rewards version was nothing out of the ordinary as both are Microsoft products. That said, it’s not exactly unusual for companies to engage in such marketing campaigns. Besides, Microsoft and Dropbox are actually partners these days, which makes them frenemies, perhaps.

Will 100 GB be enough for Dropbox users to make the switch? Probably not so much, as the problem will be transferring files from one cloud to another, which can be quite a pain if you have a lot of files. And many hardcore Dropbox users probably have terabytes of files anyway. At the very least, it could encourage those users to take a look around OneDrive and probably make it as a sort of backup. At least for one year. There is no indication until when the offer will stand, so unless you have deep issues with Microsoft or don’t want to receive marketing email from them, it might not hurt to take advantage of the promo.