It hasn’t even been a month since the 4GB Xbox 360/Kinect bundle was announced, but sure enough there’s already talks about a 250GB bundle out there, somewhere. Actually, it’s more than talks. If the Australian packaging for the 4GB bundle is to be believed, then the 250GB version definitely exists. Though, as you may have already guessed, it hasn’t been officially unveiled by Microsoft quite yet.

From what the packaging tells us, there isn’t much of a difference between the packages. Outside of the most obvious ones, of course. As you heard previously, the 4GB model isn’t as glossy (as we like to say, shiny) as the 250GB model, as it comes in a more “matte” finish. There’s also the fact that it comes with a remarkably smaller hard drive. The 250GB bundle also comes with a headset, while the lesser version does not. 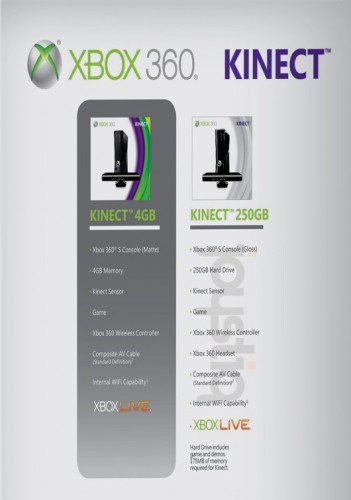 Interestingly enough, on the packaging it says that the 250GB bundle will have a “Hard Drive (that) includes game and demos.” Sure, demos make sense, but what about that game? Is Microsoft not going to put a disc in the box, and just load whatever game it may be onto the hard drive for you? So many questions! We’re hoping Microsoft comes clean on this soon — it would definitely make for a very interesting Christmas gift, now wouldn’t it?