Ohio company J.M. Smucker Co. has announced a voluntary recall of its popular Meow Mix cat food over the potential presence of salmonella. This particular recall is small in scope, involving only two lots of the bulk cat food bags that were distributed to some Walmart stores in several states. As with other salmonella recalls, people who handle the food are at risk of contracting an illness.

According to the company, the two lots of recalled Meow Mix cat food may be contaminated with salmonella. As is the case with other pet food recalls for the same reason, salmonella bacteria can infect both cats and humans. An infection in cats can produce symptoms like diarrhea and vomiting, loss of appetite, fever, and drooling.

Humans who touch the contaminated cat food or surfaces that came into contact with it, such as a food bowl, may also development an illness. In the case of human infections, symptoms can include diarrhea, vomiting, nausea, stomach cramps, and fever. However, select at-risk groups of people may develop a more serious condition. Anyone with symptoms should contact their doctor.

At the time of the recall announcement, J.M. Smucker Co. said that it hadn’t received any reports of illnesses related to the cat food and that it was making the recall ‘out of an abundance of caution.’ The recalled lots of Meow Mix were distributed to some Walmart stores in the following states:

Consumers can identify the recalled pet food bags — which are the huge 30lbs bulk size — by looking for the identifying details on the bottom and back of the packaging. The company has provided the UPC codes, lots code, and ‘best by’ dates as part of its recall: 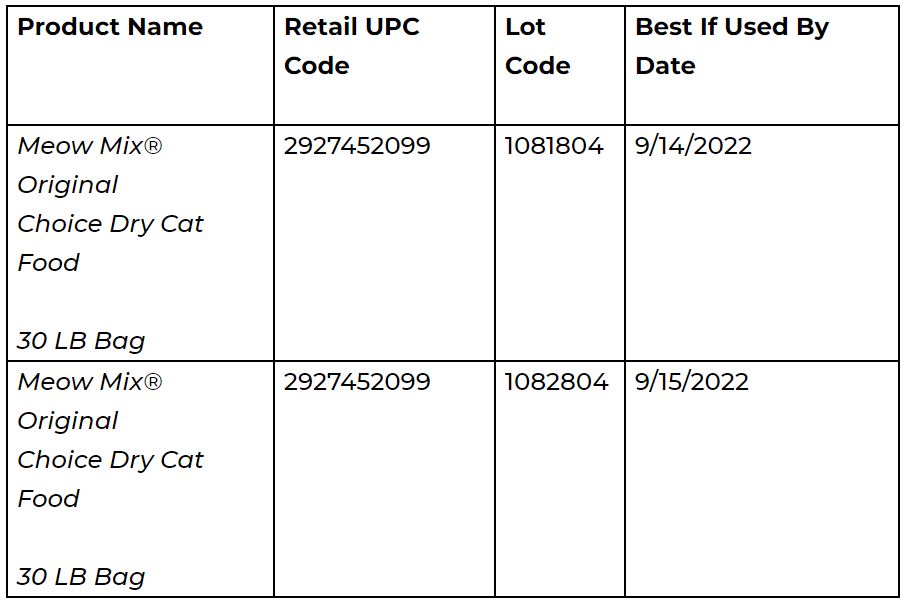 The company says that it is working with the FDA on the recall and that any consumers who own one of these recalled cat food bags should throw it away. Presumably, this should be done in a way that prevents scavenger animals from accessing it once it has been put in the garbage to protect them from illness.