Of all the racecar liveries ever to grace the track, one of the most attractive has always been the Gulf livery. Gulf cars are known for their baby blue and bright orange color scheme. McLaren has announced that its MSO division has built an Elva that wears the Gulf livery that will debut at Goodwood SpeedWeek. The special car celebrates a new partnership between McLaren and Gulf Oil.

Under the new partnership, cars wearing the iconic livery are available for a commission from MSO. The first partnership between these two brands originated in the 1960s. The Gulf livery first appeared on the McLaren Can-Am, Formula 1, and Indy cars between 1968 and 1973.

Twenty years later, the Gulf livery returned on McLaren cars ran by a customer team in multiple races, including Le Mans. The vehicle is making its debut at the Goodwood Motor Circuit. For those unfamiliar with the McLaren Elva, the car is part of the new Ultimate Series and maintains the lightweight philosophy the McLaren has held to for decades.

The vehicle has no windscreen and no roof. It uses Active Air Management System to create a virtual canopy over the integrated cockpit. Power comes from a 4.0-liter twin-turbo V-8 engine that produces 815PS and 800Nm of torque. Only 149 examples of the vehicle will be built. 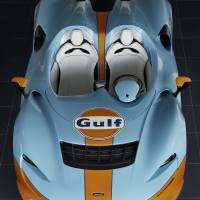 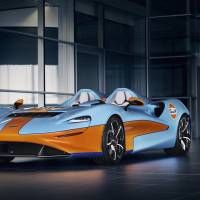 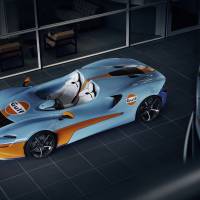 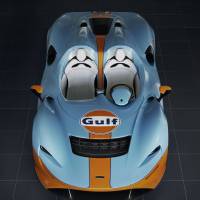 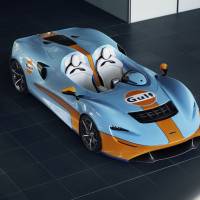 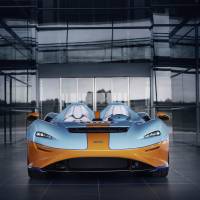 Each is custom ordered, and the vehicle will be one of the rarest McLarens ever made. They are available with a near-limitless degree of personalization, and each will have its own unique identity. It’s unclear if multiple Gulf liveries could be ordered and differentiated with various paint schemes. McLaren says the customer ride celebrates its history in sports car racing and its new partnership with Gulf. We are just glad to see the iconic livery take to the streets again.