Mars Gale Crater could have held water for millions of years

Gale Crater might as well have been known as Gale Lake. That is, millions of years ago. And if Martians spoke Earthling English. Using images captured by Mars Curiosity Rover, who landed in that crater and made it its home, and drawing parallels to our own planet’s topographical history, NASA finds there might be scientific basis in the hypothesis that the crater was once a lake. Even better, that lake might have existed for millions of years, probably enough to even support the beginnings of life.

One of the most important ingredients to life, at least biological life as we know it, is water. With its still existing polar ice caps, life on Mars has always been a subject of both fiction and scientific inquiry. The Gale Crater, possibly formed by an asteroid impact billions of years ago, was specifically chosen for the Curiosity’s landing spot precisely on the theory of its ties with Mars’ possible water system. The findings are far from conclusive but are quite promising.

Comparing the sediment layers of the crater with lake formations on our own planet, scientists theorize that Gale Crater would have existed as a lake once and not just for a short time but for millions of years. That last bit is crucial. To have had a body of water that long, contained in a basin that big (Gale Crater’s diameter measures 96 miles), Mars would need to be loaded with water and have a vigorous water cycle that we have here on Earth that will keep the atmosphere humid and will keep the lake from drying up. And that humidity can be brought about either with warmer ice, like polar ice caps, or with an ocean. Either way, these factors could very well have supported microbial life at the very least. 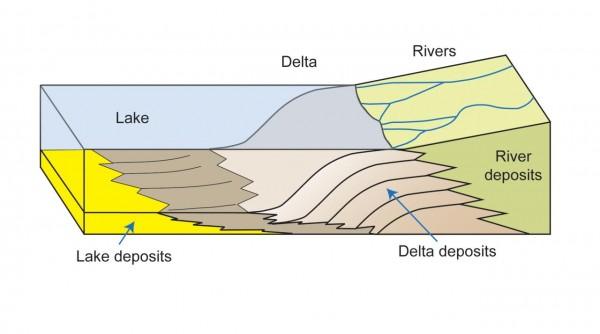 The one caveat is that these findings are based on our own understanding of how the Earth developed over time. And our knowledge only goes as far back, and we can never be 100 percent sure that things happened the way we think they did. And in theory, we can’t be absolutely sure if our definition of life is the only definition in the universe. Still, the search and research goes on, and Curiosity will continue taking pictures and drilling for more data, but suffice it to say, the guys and gals over at NASA are quite excited about this.

SOURCE: NASA
VIA: The Verge