Zippia, a career website, has a fun bit of research for the Independence Day holiday: which states spend the most money on fireworks, at least based on population and firework imports. The list is a bit surprising — Texas, for example, doesn’t make the Top Ten list despite its popular association with independence and firepower.

The research is a basic, yet fun look into the fireworks habit of each state in the US. Though many states, counties, and cities have their own regulations involving the use of fireworks at home, including which products are allowed and whether they can be set off in residential areas, people tend to blow them up regardless and enforcement is typically reserved to cases of reckless behavior. 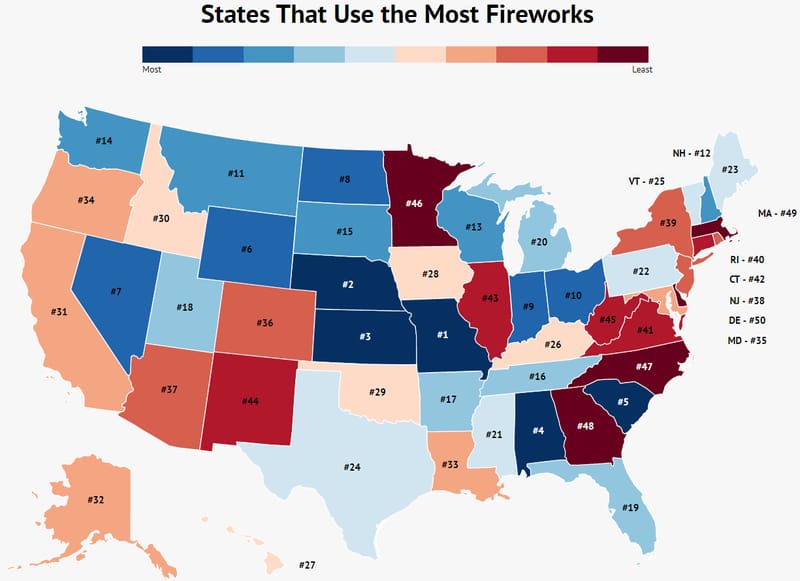 Based on US trade Census data on firework imports for each state, as well as US Census data on state populations, it turns out that Missouri collectively spends the most on fireworks for the 4th of July, followed by neighboring states Nebraska and Kansas. Alabama ranks #4 on the list, followed by South Carolina, Wyoming, Nevada, North Dakota, Indiana, and Ohio at 10th place.

The states that seem to enjoy the least amounts of fireworks, at least based on import data, include Georgia, Illinois, Minnesota, New Mexico, Arizona, Colorado, California, Oregon, Louisiana, and New York. This is likely due to local laws that reduce how many fireworks are imported, but keep in mind that many people near borders will cross state lines to purchase their goods in another state, then drive the products back to their home state.

While fireworks are a lot of fun, they’re also dangerous, and not just because you may accidentally lose a finger if the fuse is too short. A recent study found that the amount of risky fine particulate matter in the air increases sharply the week before Independence Day and remains that way the week after the holiday, at least in Calfornia, putting public health at risk.