Logitech G513 Review: A great (but expensive) keyboard for the RGB-obsessed

If you’re looking for an RGB mechanical keyboard, there are plenty out there to choose from. Many gaming keyboards these days have started using mechanical switches instead of membrane ones, and while most of those seem to use some kind of Cherry MX switches, Logitech has taken things one step further by developing its own switch, dubbed Romer-G. These switches feature in the Logitech G513 Keyboard, the more expensive successor to the G413, and in fact they now come in two different varieties: tactile and linear. How does Romer-G hold up, though? Beyond that, is the G513 a gaming keyboard worth its somewhat high asking price?

We can debate endlessly about the minute differences between Cherry MX and Romer-G switches, but at the end of the day, design is an aspect that reigns supreme. It doesn’t matter how much rollover a keyboard may offer or how responsive its keys may be if the keyboard itself is designed poorly. Happily, the G513 features a design worth getting excited about. 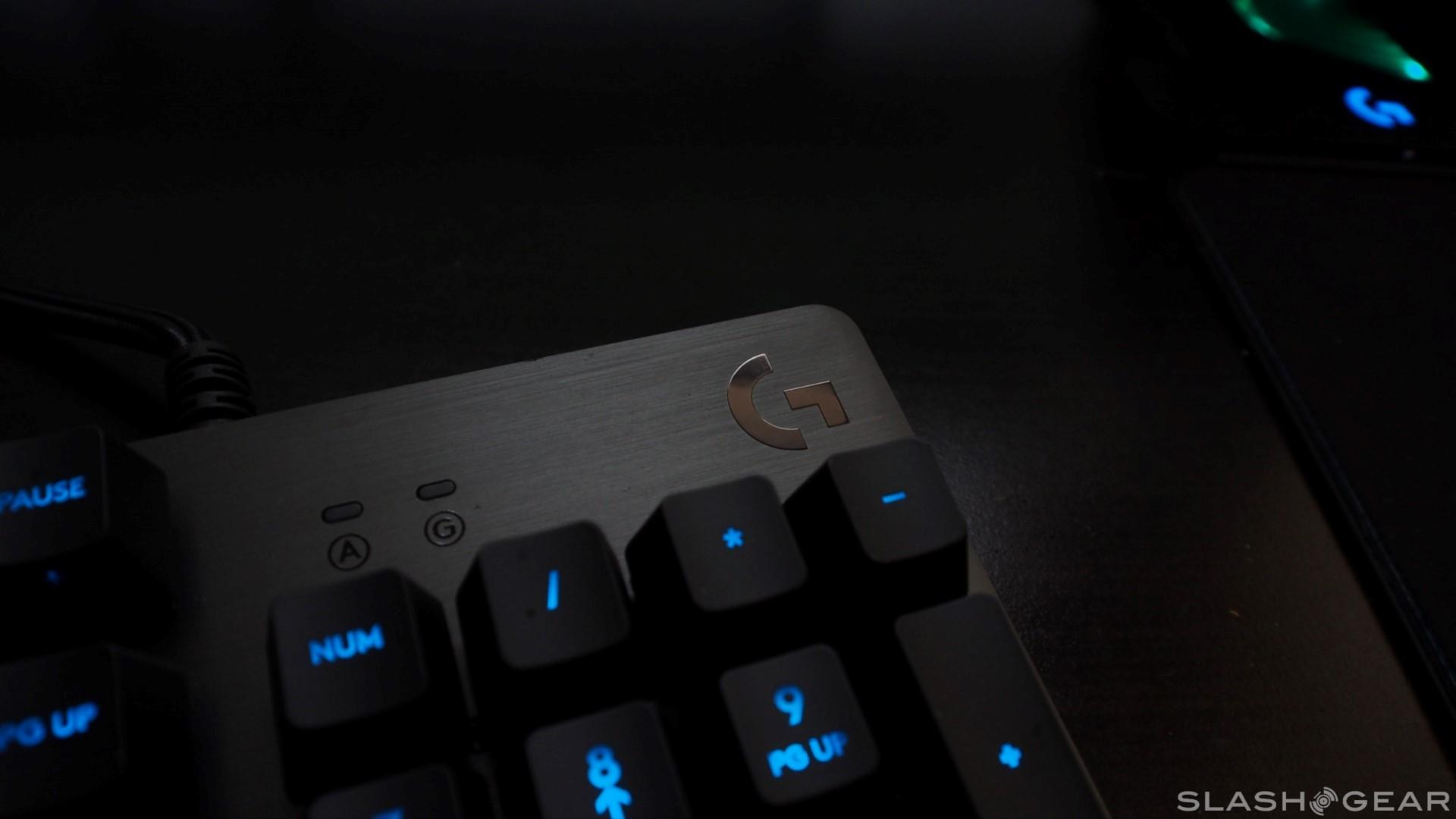 While you’ll encounter a seemingly endless number of keyboards crafted entirely out of plastic, the G513’s top case is instead constructed out of aluminum. This gives the keyboard a rather sturdy – if not more industrial – feel, and that’s evidenced best when you try to pick it up. This is a heavy keyboard, and it isn’t one that I can see breaking easily over your knee in a fit of gaming rage. If you have an issue with that, then, you might want to consider the G513, as it definitely feels like it’ll be able to stand up to some abuse.

The G513 comes in two colors: carbon and silver. I was only sent the G513 Carbon for review, but that’s probably for the best as I definitely prefer this color scheme. The aluminum on top is a nice dark gray, and the RGB keys look great with it as a backdrop. In general, I’m not a fan of light-colored keyboards, because eventually, the rigors of work and play tend to catch up with even the most well-constructed devices, and that’ll show all the more on something like the G513 Silver. 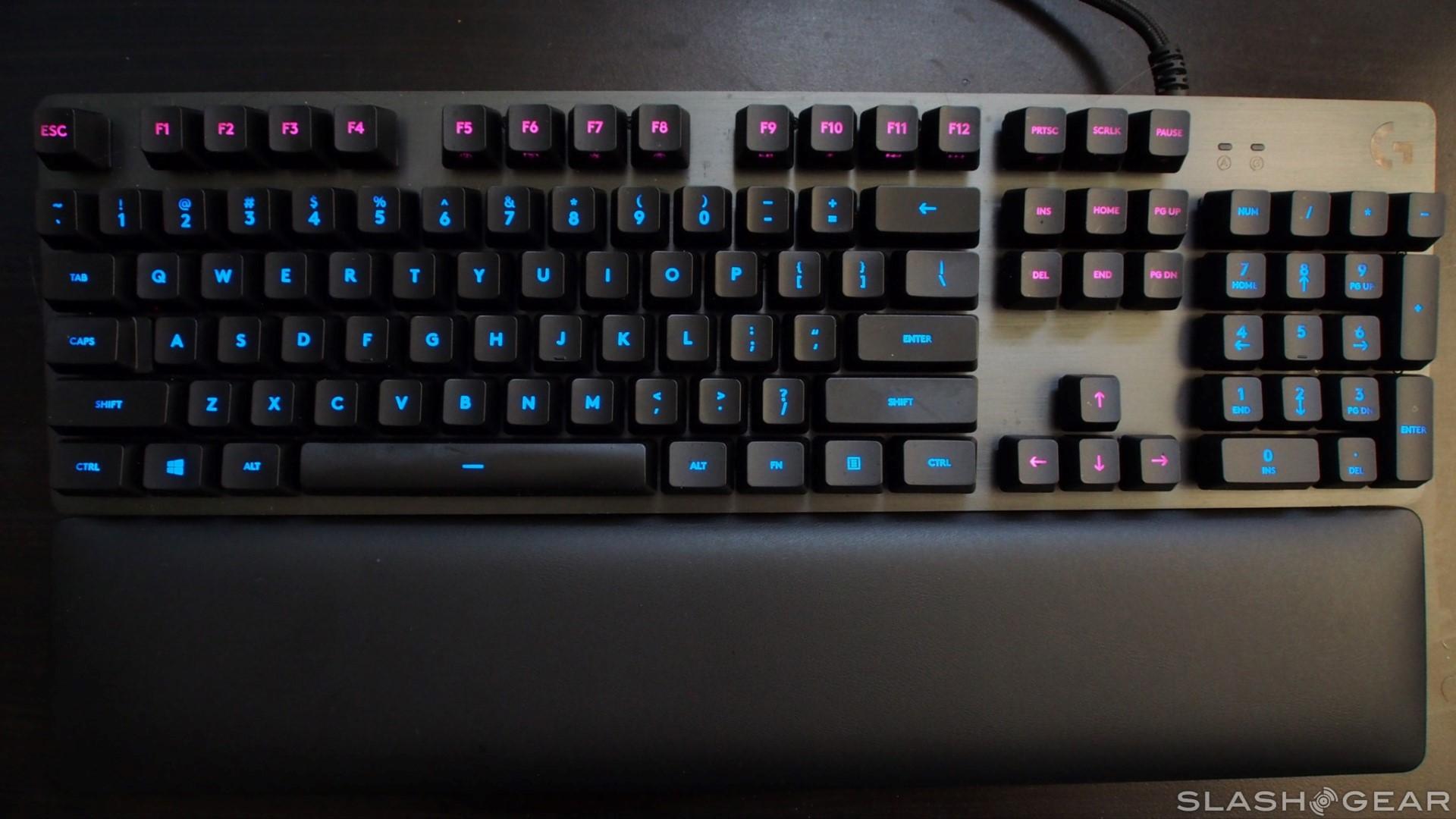 The G513 is a full-sized keyboard, which means we’ve got a numpad on the right side, but unlike some other gaming keyboards, there’s no dedicated set of macro keys. You can set your own macros on the function keys through Logitech Gaming Software if you like, which seems like a nice compromise between having macro functionality and the increased size that a set of dedicated macro keys would require. 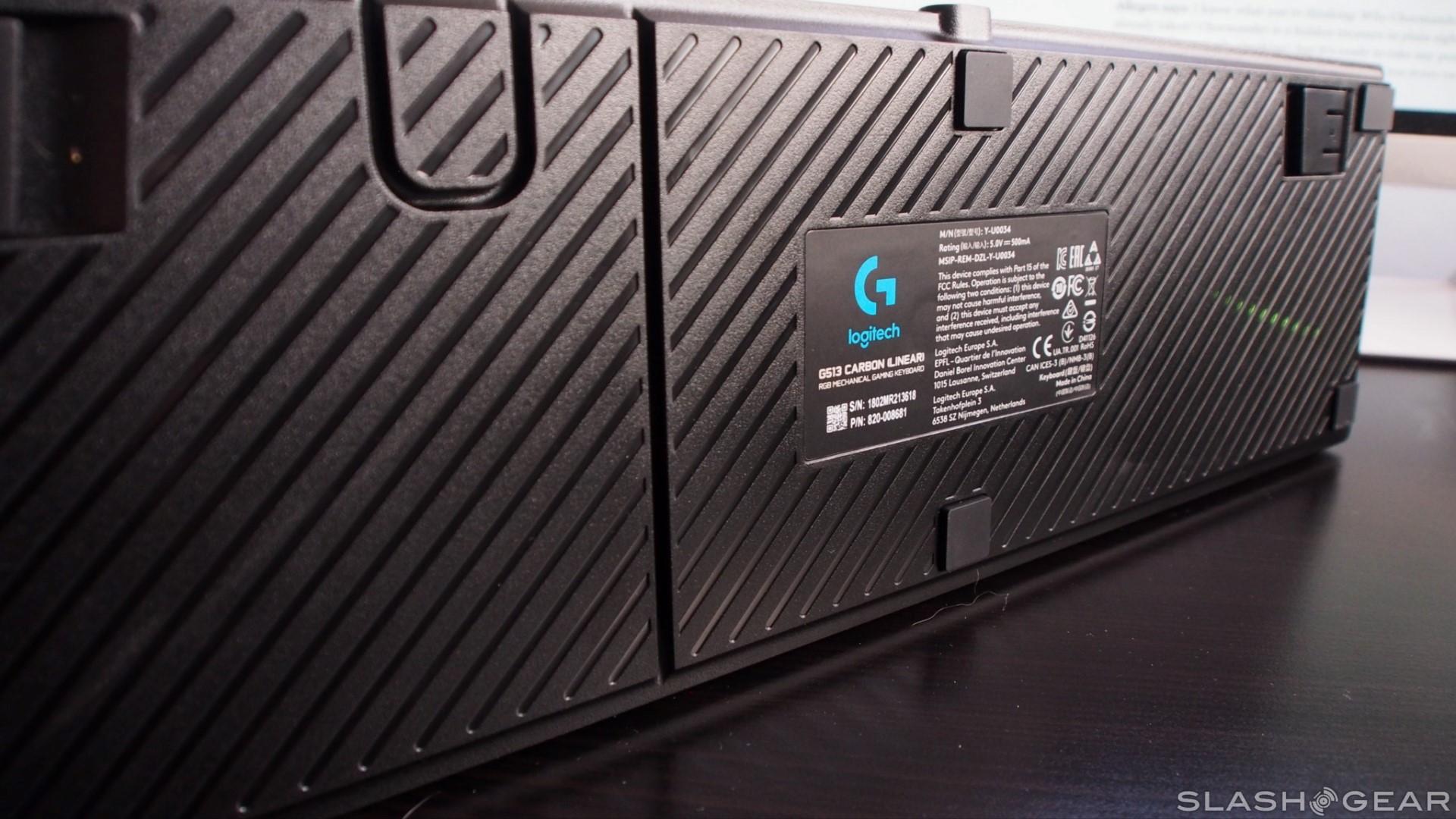 Like the G413, the G513 comes with a set of 12 contoured keycaps – Q, W, E, R, A, S, D, and 1 through 5 – along with a keycap puller to swap them out quickly. The idea behind these special keycaps is to offer a tactile signal on important keys while gaming, thereby allowing players to quickly reset the positioning of their left hand or find important skill hotkeys fast. They work well for that purpose, though after spending a few matches of Heroes of the Storm playing with them on, I opted to return to the standard keycaps. I wouldn’t say these contoured caps are bad, and indeed, I think some players will find them beneficial, but I just prefer the standard caps over their contoured counterparts.

Underneath the keyboard, there isn’t a whole lot happening. You have your standard flip-out stands that elevate your keyboard, but you also have a few cutouts you can route headphone and mouse cables through to keep your desk tidy. I didn’t use these myself as my desk layout wouldn’t allow for it, but I can definitely see them being handy in other scenarios. The G513 also ships with a thick wrist pad made out memory foam, and while it feels great, I am disappointed that there isn’t a way to actually attach it to the keyboard. 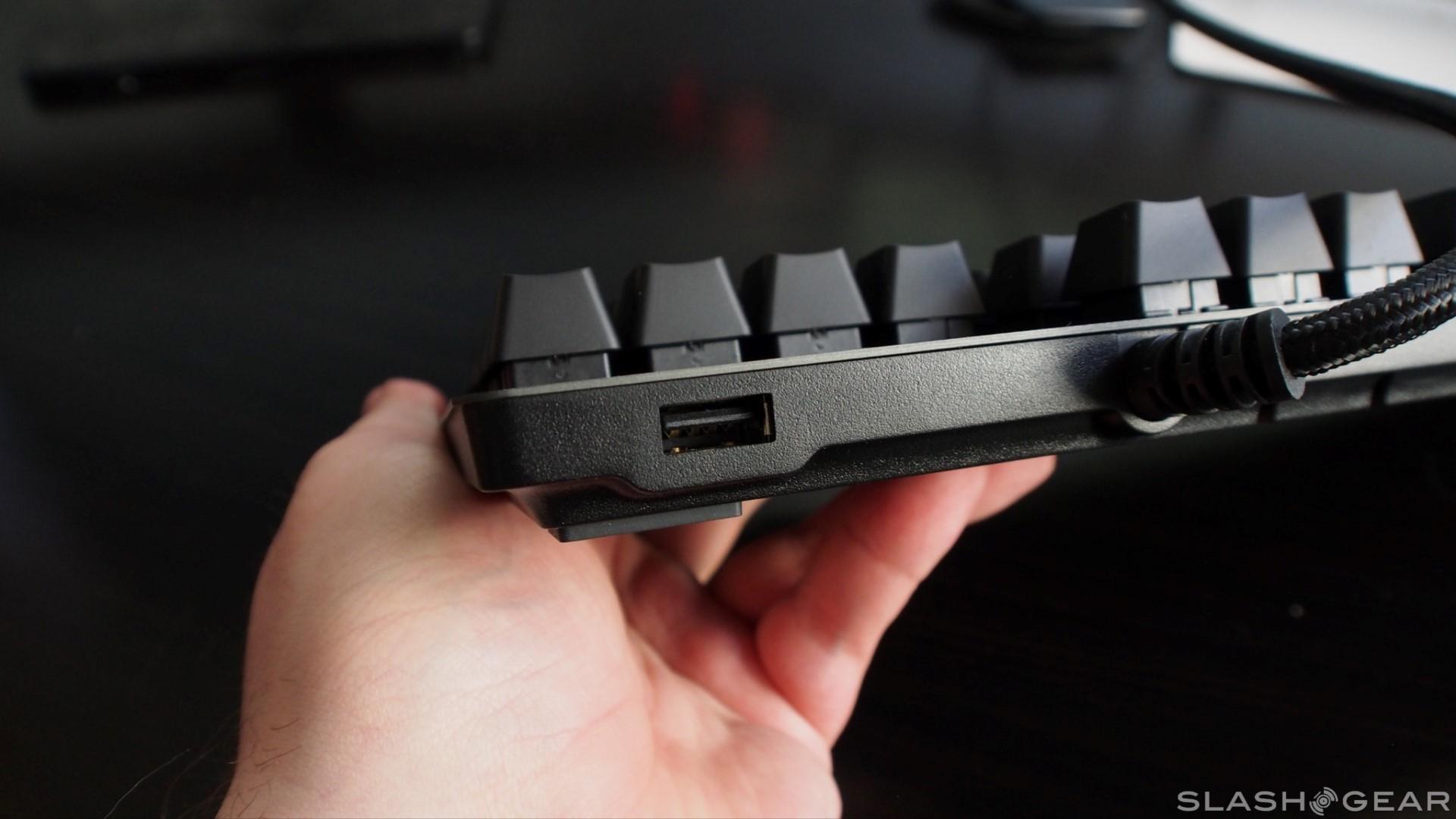 One nice thing about the G513 is that it features a USB 2.0 passthrough on the upper right side. This passthrough is good for both power and data, which means you can use it to charge a phone or plug in a mouse. An easy-to-access USB port is never a bad thing, but the trade-off is that the G513 has to take up two of your computer’s USB ports if you want to use it. That, of course, is the point of a passthrough, but if you’ve got just one open USB port on your PC, you aren’t going to be making use of the one the G513 comes equipped with.

Before we dive into the benefits Logitech claims for Romer-G, let’s quickly examine why you’d want to choose a mechanical keyboard over a membrane one in the first place. While membrane keyboards are inexpensive and easily acquired (my local grocery store sells membrane keyboards for $10 a pop), they aren’t that satisfying to type on. Mechanical keyboards, with individual switches underneath each key, tend to make a satisfying clack with each keystroke, and the fact that each key has a dedicated switch underneath means that in some cases, people actually find that they type faster on a mechanical keyboard thanks to increased responsiveness. 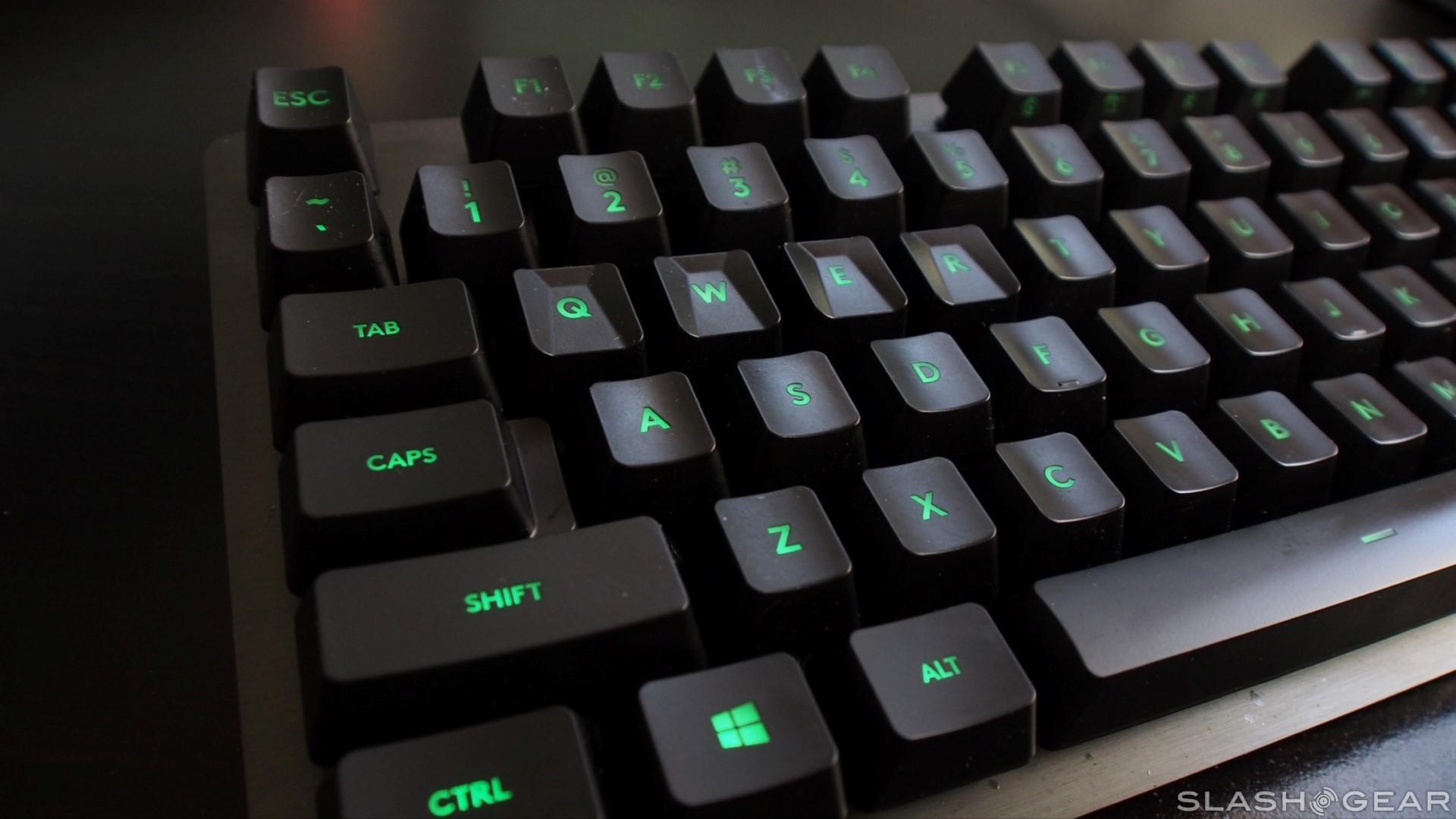 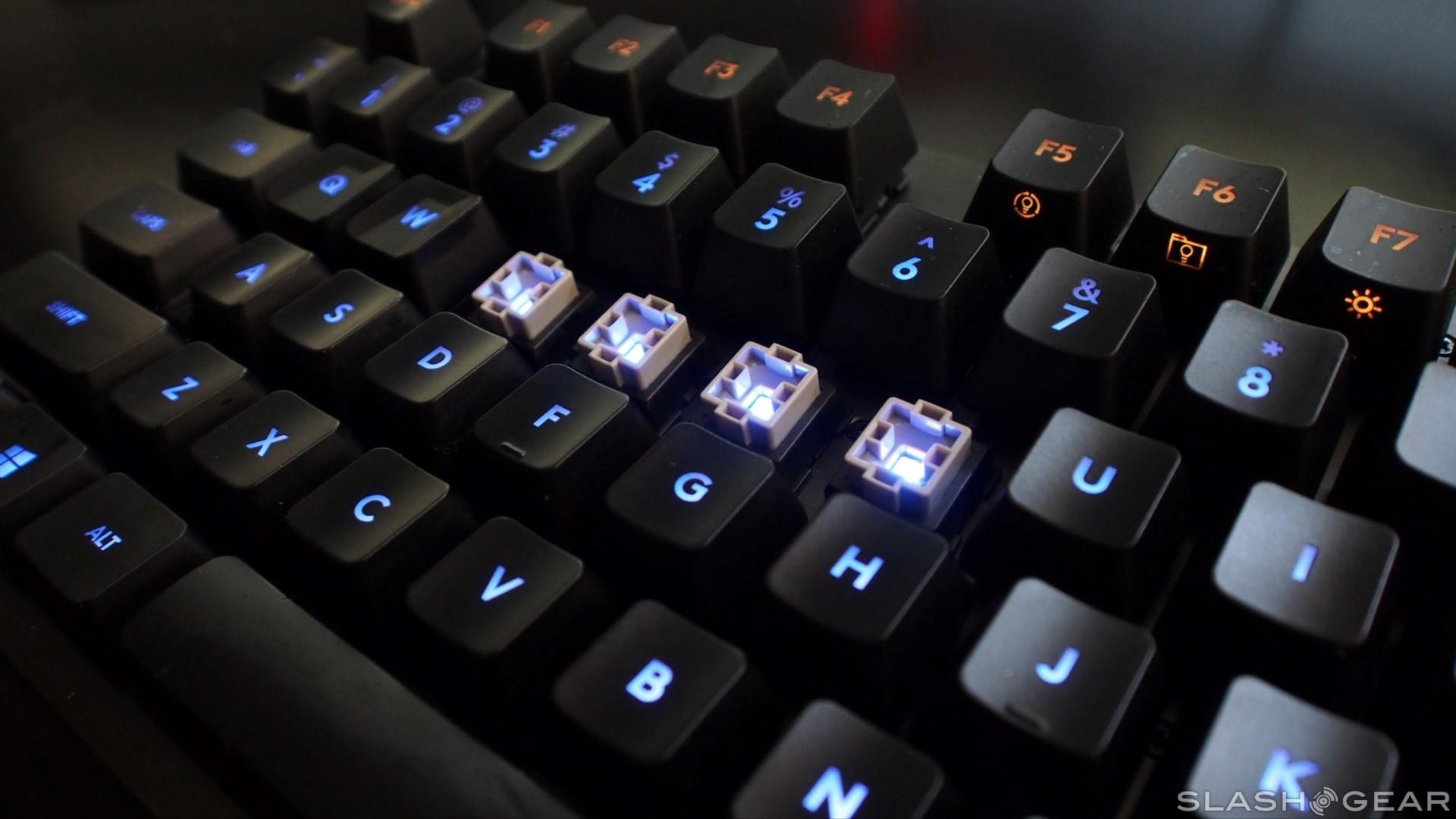 As for Logitech’s claim that Romer-G keys are 25% faster than “standard mechanical switches,” that’s a hard one to test, especially when I’m not an incredibly fast typist to begin with. I have noticed that the keys on the G513 tend to spring back to place a hair quicker than other keyboards I own, but I don’t think I can confidently say that I’m a faster typer on the G513 than I am on any mechanical keyboard I’ve tried. Still, as you’d expect from any top-of-the-line mechanical keyboard, typing on the G513 is wonderful. Each key offers a satisfying feel as you press down on them, and I can definitely say that I’m faster on the G513 than I am on a regular membrane keyboard. 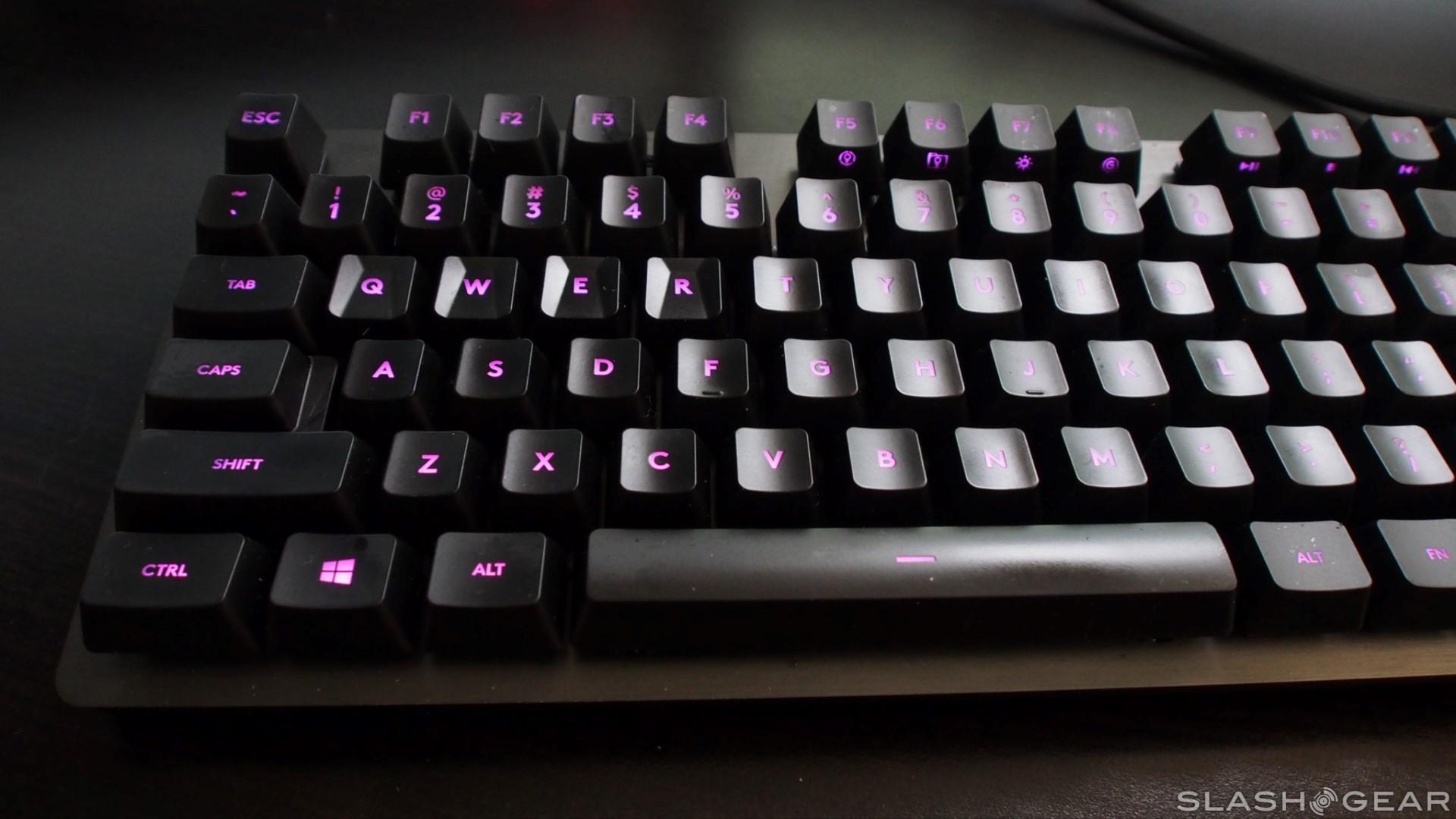 With the G513 comes the introduction of Romer-G Linear, joining the standard Romer-G Tactile switches. If you’re unsure of which one to get, the distinction is simple: with Tactile switches, you’ll receive tactile actuation when you press a key, while the Linear keys are designed to provide a smooth keystroke. If you’re buying this keyboard primarily for gaming, opt for Tactile switches, as they’ll give confirmation that your key presses are actually registering. Those who are buying for typing, on the other hand, can go for either one, but might like the feel of Linear keys more.

As for how the keyboard feels, there are no complaints. Mechnical keyboards have been my go-to for years at this point, as they should be for anyone who sits in front of a computer for a significant amount of time each day. Typing on the G513 is a pleasure, and it’s easily one of the best-feeling keyboards I’ve ever used.

As with pretty much every other RGB accessory Logitech has released lately, the G513 is compatible with LGS – Logitech Gaming Software.

If you own other Logitech RGB accessories, you can use LGS to sync up the lighting between all of them. It makes for quite a show when you’ve got speakers, a mouse, and a keyboard all on the same lighting pattern, but even if the G513 is the only Logitech accessory you own, you can still get a lot of use out of LGS. 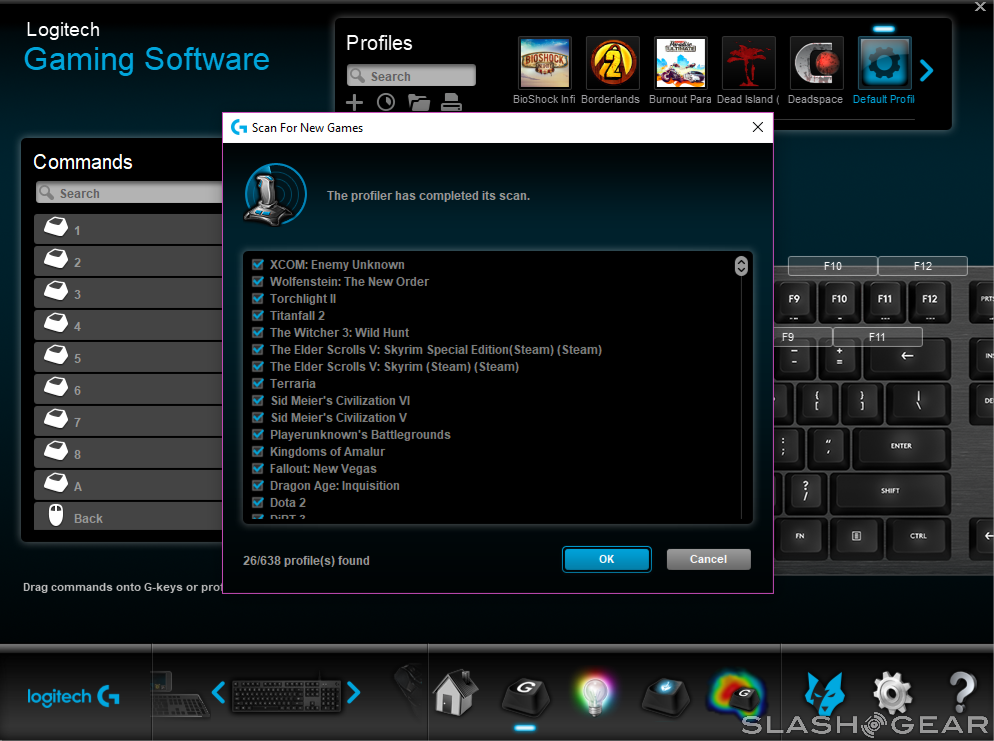 As I said earlier, the G513 comes with a set of custom function keys, and LGS is where you’ll customize them. You can select from the approximately 600 game profiles LGS ships with, or you can use the software to set up your own profile for a game that might not be on the list. You even use LGS to set up specific lighting effects on your G513, which is handy for when you’re playing a certain game and you want only specific action keys backlit.

Those who have used Logitech gaming keyboards in the past may have noticed a distinct lack of extra keys on the G513. Usually, those extra keys were used to create custom macros, but on the G513, the function keys serve that purpose. You can use Logitech Gaming Software to customize the function keys to an insane degree, so if you need a keyboard that can support programmable macros (looking at you, MMO players), the G513 and LGS definitely have you covered. 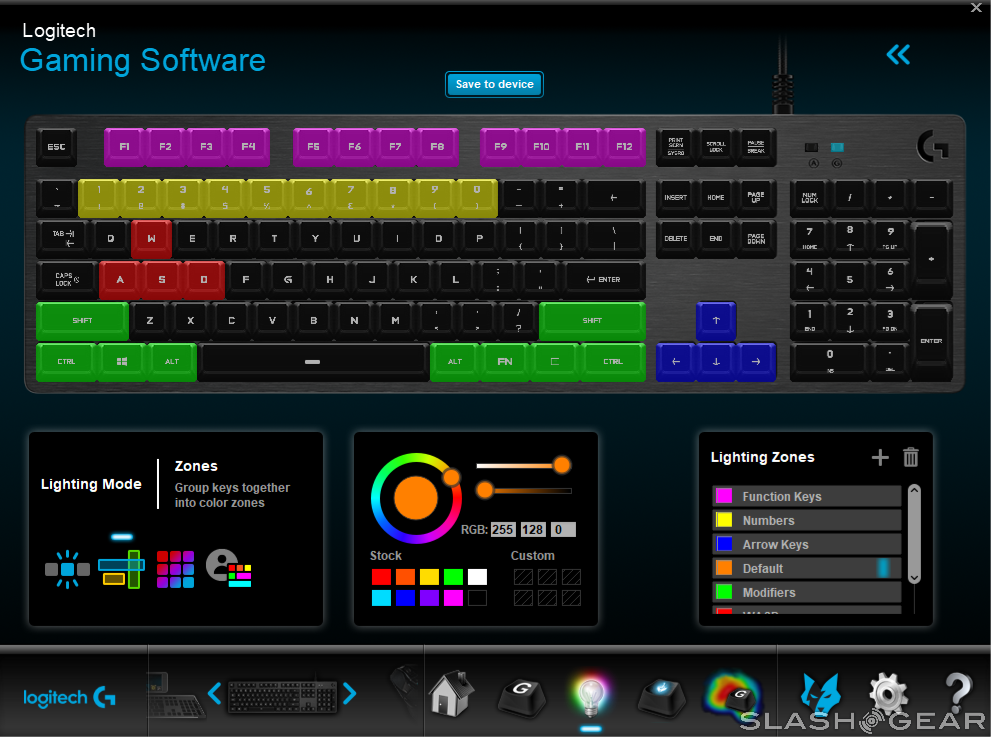 One of the handiest features of Logitech Gaming Software is the amount of options you have when it comes to game mode. Most gaming keyboards support some kind of game mode – which at a minimum should disable the Windows key while you’re playing a game – but with LGS, you can edit game mode to support other keys you have no use for while gaming. This ensures that only the keys you intend to press while playing are active, which is very nice to have if you tend to play certain high-intensity video games.

Logitech Gaming Software is a very useful tool that increases the capabilities of the G513 significantly. Though the G513 may seem like a rather by-the-books gaming keyboard when used on its own, the amount of customization LGS allows definitely make this a good choice for those who want an high level of control over what their keyboard can do in-game.

Though the benefits of Romer-G keys might be somewhat lost on me, the G513 is still an excellent keyboard. It feels great to type on, the RGB lighting looks great, and best of all, it really feels like it can stand up to heavy use for a long time. What more can you ask for out of a keyboard? 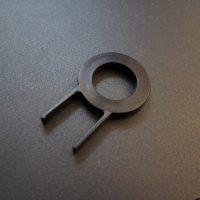 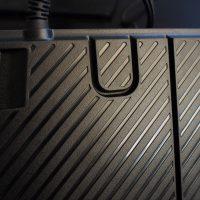 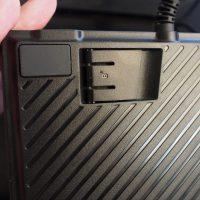 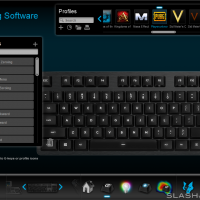 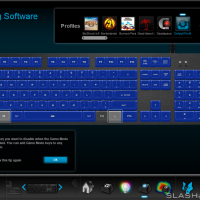 It turns out that you can ask for much more. I admit that I was mostly indifferent toward Logitech Gaming Software when I first started using it, but after digging in and realizing exactly what you can do with it, I think it’s a great piece of software. It opens up a lot of customization options for the G513, and I think it helps the keyboard stand above some others in this space. 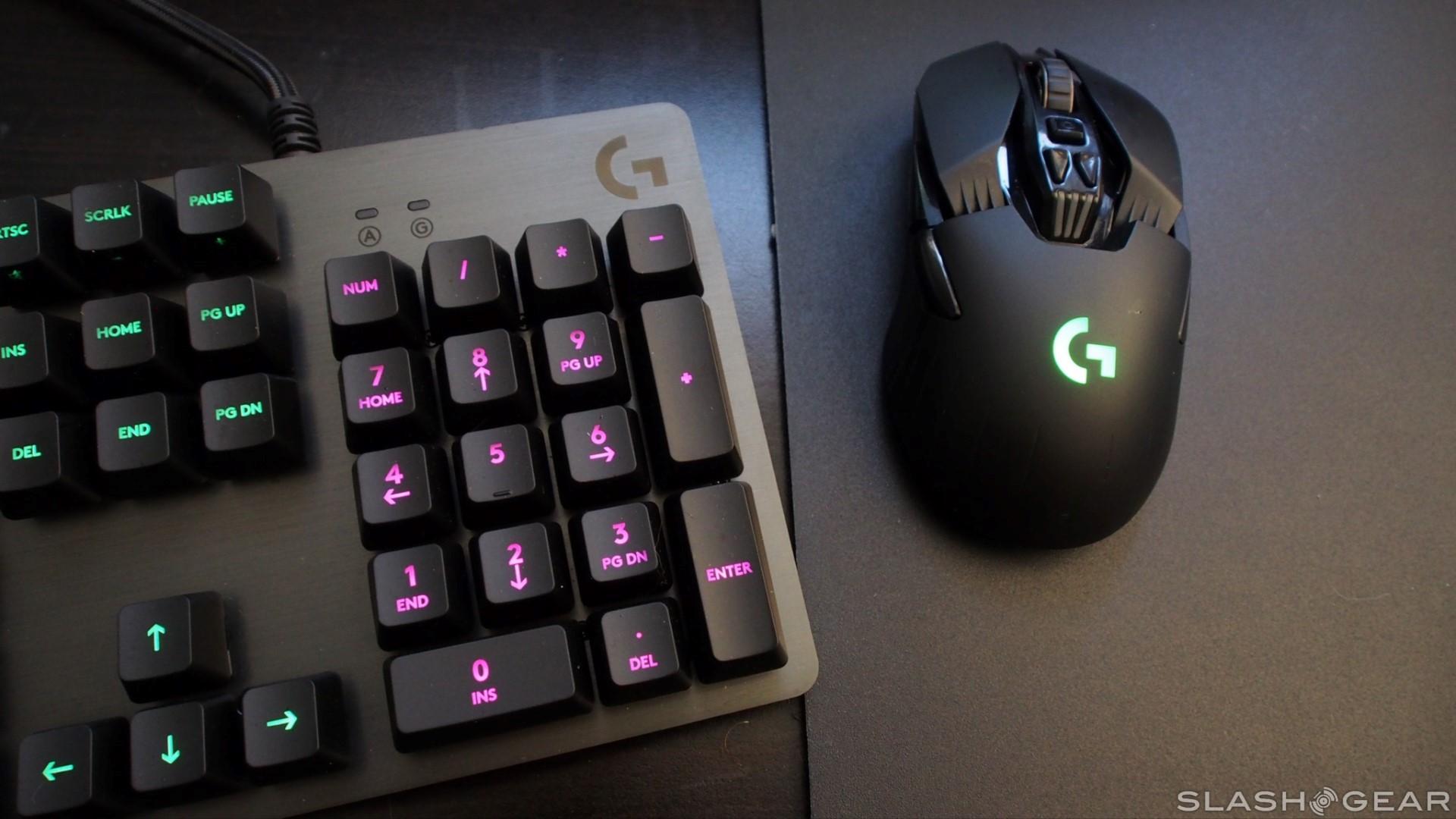 The only real issue I have with this keyboard is the price. At $149.99, this is not a cheap keyboard, and I can’t help but feel that you can get a similar level of performance out of other mechanical keyboards that cost less. If you have other Logitech-G accessories, then shelling out for the G513 becomes a better proposition, because you’ll be able to manage the keyboard in the Logitech Gaming Software you already use (and it really is very cool to sync this up with all of your other Logitech G-branded accessories).

If you already have a G413 or a mechanical keyboard that you love using, I’m not sure it’s worth upgrading to the G513 at this price. Ultimately, how much you spend on your gaming peripherals is your business alone, and if you decide to drop $150 on the G513, I don’t think you’ll be disappointed.