We have talked about the 3-D printed gun making company called Defense Distributed. These guys have designed components for weapons in the past that are made using standard 3-D printers. In the past, the company has worked on making individual components for existing weapons, recently it test fired its first fully 3-D printed gun. Things didn’t end too well for that prototype weapon.

Forbes reports that the weapon survived its initial test, which was handled by a budget remote system consisting of a long piece of string. That initial test saw the weapon fire a standard.380 handgun cartridge with no visible damage. The weapon was fired by simply pulling a string from a distance of about 20 feet reports Forbes. 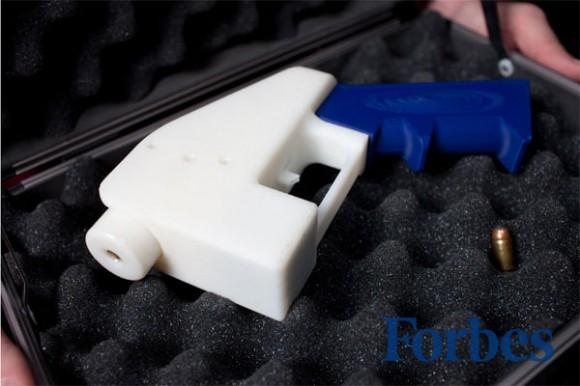 The odd weapon used a number of 3-D printed springs, a trigger mechanism made using the 3-D printer, and other components. The only parts of the weapon that weren’t made using a 3-D printer were the actual.380 round and a nail used as a firing pin. Forbes reports that a second test using a.380 round, prior to the rifle cartridge explosion, resulted in a misfire.

Another test firing was also conducted that day with the same weapon using a more powerful rifle cartridge. The particular cartridge in this case was a 5.7 x 28 rifle cartridge. The gun was again fired using the long string remote method. The weapon didn’t fare so well this time and reportedly exploded into a cloud of 3-D printed shards when the string was pulled.