Some products are just so weird that perhaps you don’t expect them to get a successor. Like the curved Samsung Galaxy Round. Or LG’s rollable Bluetooth keyboard. Well, scratch that last one. LG has just indeed unveiled the follow-up to one of last year’s most unique Bluetooth keyboards. But rather than just a repeat of the original, the LG Rolly Keyboard 2 finally adds a dedicated row of keys for numbers and special functions, as well as a handy small tab to help unroll the keyboard.

We’ve seen our fair share of portable keyboards designed to minimize footprint will still offering maximum typing productivity. There are regular flat, solid keyboards and also keyboards that fold in half. And while there are also those rubbery, flexible, rollable keyboards, LG’s Rolly Keyboard is considerably different, as if combining both rolling and folding mechanism. See, each row of keys actually sit on a solid strip and the flexible material can only be found between rows. In practice, you are really only folding the keyboard into a rectangular prism. 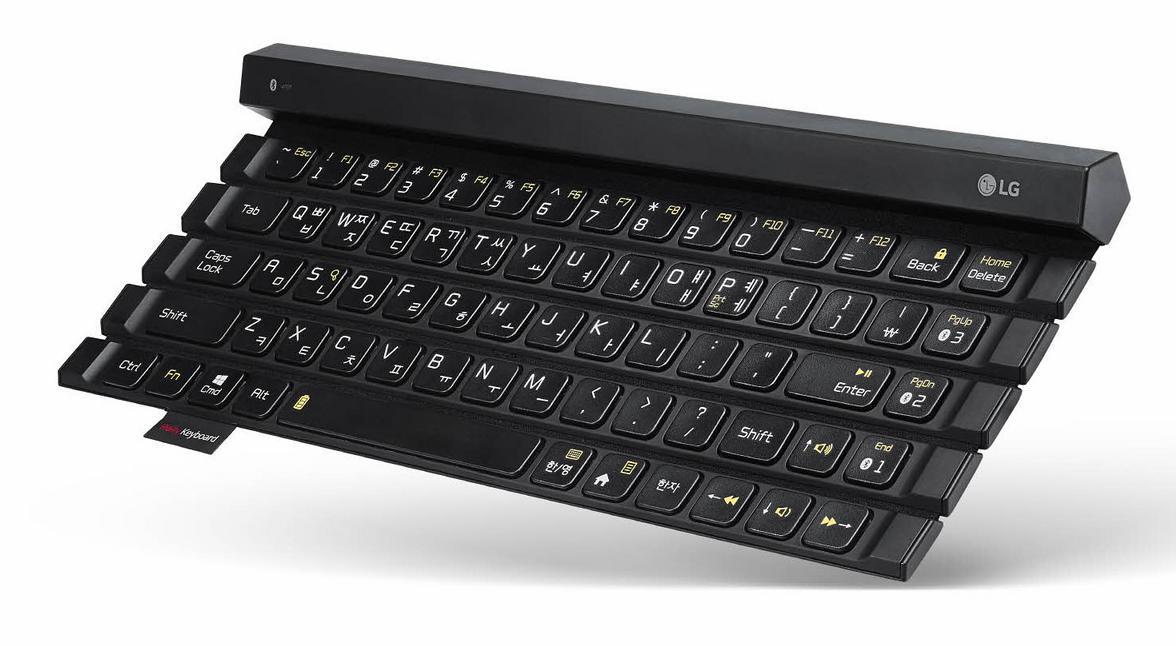 The problem with last year’s iteration was that it only had room for three rows of keys, as the fourth side was is actually used to house the electronics. That left no space for the row of numbers, much less Functions keys like F1 or Esc. The Rolly Keyboard 2 addresses that flaw, adding a separate row for those keys. The cost, however, is that the keyboard no longer rolls into a simple prism but into something akin to an extruded pentagon.

The rest of the features remain the same or have been improved. The keyboard can still pair with multiple devices, now up to three instead of last year’s two, and can switch easily between those with a single key. It also has a “dock” that can accommodate smartphones at least 4 inches in the diagonal. A single AAA battery is enough to keep it powered for about 3.5 months, or so says LG.

The LG Rolly Keyboard two is launching in South Korea for 129,000 KRW, roughly $112. No word yet on whether LG plans to bring it outside the country though.