LG G6 hands-on: It’s all about this amazing screen

If at first you don’t succeed, go back to basics and squeeze out the best of the best features minus all the gimmicks: that’s just what LG is doing with the highly anticipated G6. It’s 2017, and it’s abundantly clear that, since the launch of the G5 and the abject lack of interest in the whole “module” concept, it’s time for the Korean mobile phone manufacturer to make a sharp about-turn and focus on what matters most: making a solid phone. That being said, when I met with LG’s designers for both devices in South Korea earlier this month, it was made abundantly clear that the design of the G6 was already being considered in parallel with the G5. That helps explain why the two phones feel so very different.

Listen to LG, and you could get the impression that the G6 was designed entirely on the basis of customer feedback. The new smartphone, making its debut at Mobile World Congress 2017 today, boils down to three key requests. First, people want bigger displays; second, they want a phone that they can use one-handed; third, they like the reassurance of waterproofing. 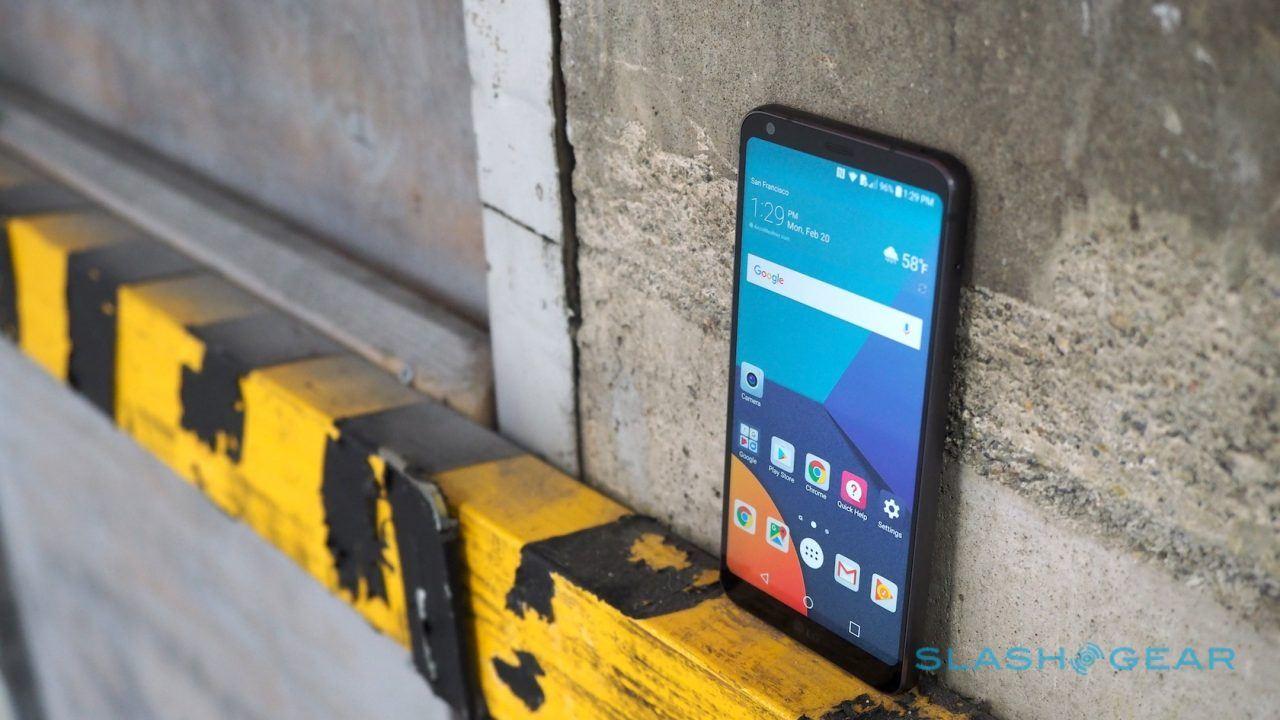 I can’t say I argue with any of that. Indeed, as we’ve seen smartphone displays grow and grow – and I’m undeniably a fan of all the extra productivity that can unlock – the ability to actually use that on the go has decreased. The only way to give users a larger display without increasing physical size is to shift some pixels around. We’ve seen LG tinker with adding a second screen on its V-series phones, but that still didn’t really solve the problem of having a large device.
Instead, LG opted to change the aspect ratio of the display. Rather than the 16:9 that’s currently most popular, the G6 is the first smartphone to use an 18:9 panel. The 5.7-inch panel runs at 2,880 x 1,440 Quad HD resolution, which LG has dubbed FullVision.

Math-heads out there might be thinking that 18:9 actually rationalizes down to 2:1, and they’re not wrong. The G6’s display is comprised of two perfect squares: when held in portrait orientation, it makes the panel slightly taller than the screens of similarly-sized phones. That way, LG figures, even if you have some on-screen controls at the top or bottom, the space for your content is still the familiar 16:9 ratio or thereabouts. 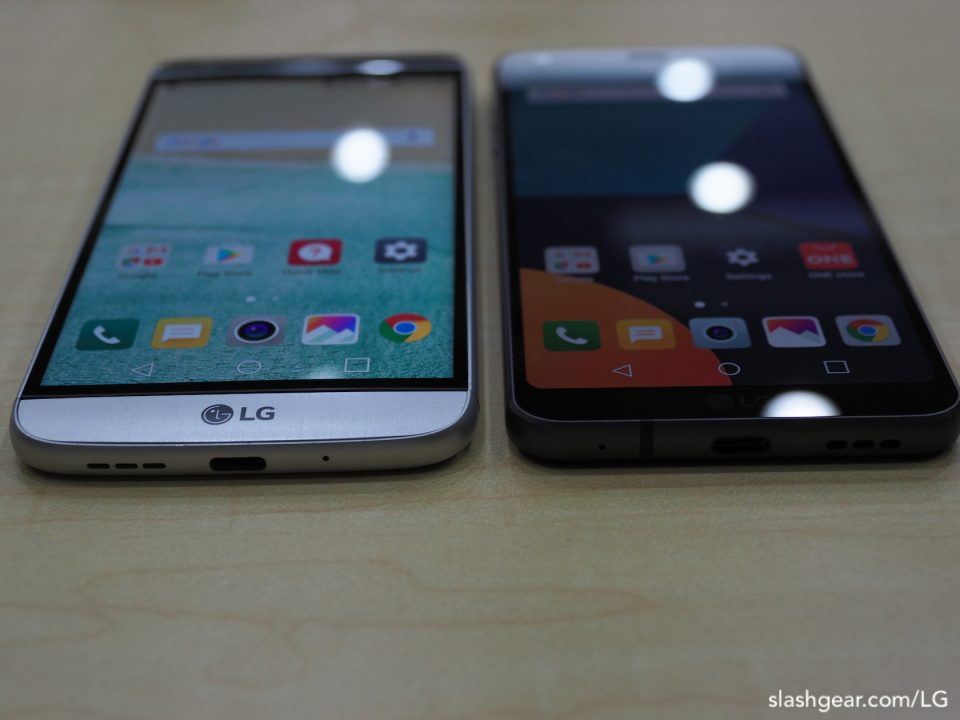 That alone wouldn’t be sufficient for one-handed use, mind. LG slims the top and bottom bezels down considerably, but more noticeably it gives the screen curved corners. Now, set aside the fact that those curves aren’t quite the same radii as the curves of the phone’s chassis – something I suspect will frustrate the more detail-focused among us – and instead take solace in the fact that, by trimming the sharp edges away, LG has made the G6 more resilient in drops. Usually, if a phone’s corner strikes a hard surface, all that force is passed into the 90-degree point of the edge of the display. LG tells me that, because the G6 has rounded-off edges instead of points, the force dissipates more evenly and with less risk of your screen cracking.

We’ll have to wait until the first batch of G6 get dropped to know just how accurate that is, but there’s no denying the benefits in the hand. Honestly, switching to an 18:9 ratio display is brilliant. The G6 has comparable screen area to an iPhone 7 Plus, but fits much more comfortably in the palm. Compare it side-by-side with an iPhone 7, meanwhile, and the difference in screen real-estate is comical. Indeed, LG is predicting that both Apple and Samsung will switch to 18:9 ratio on their phones this year. 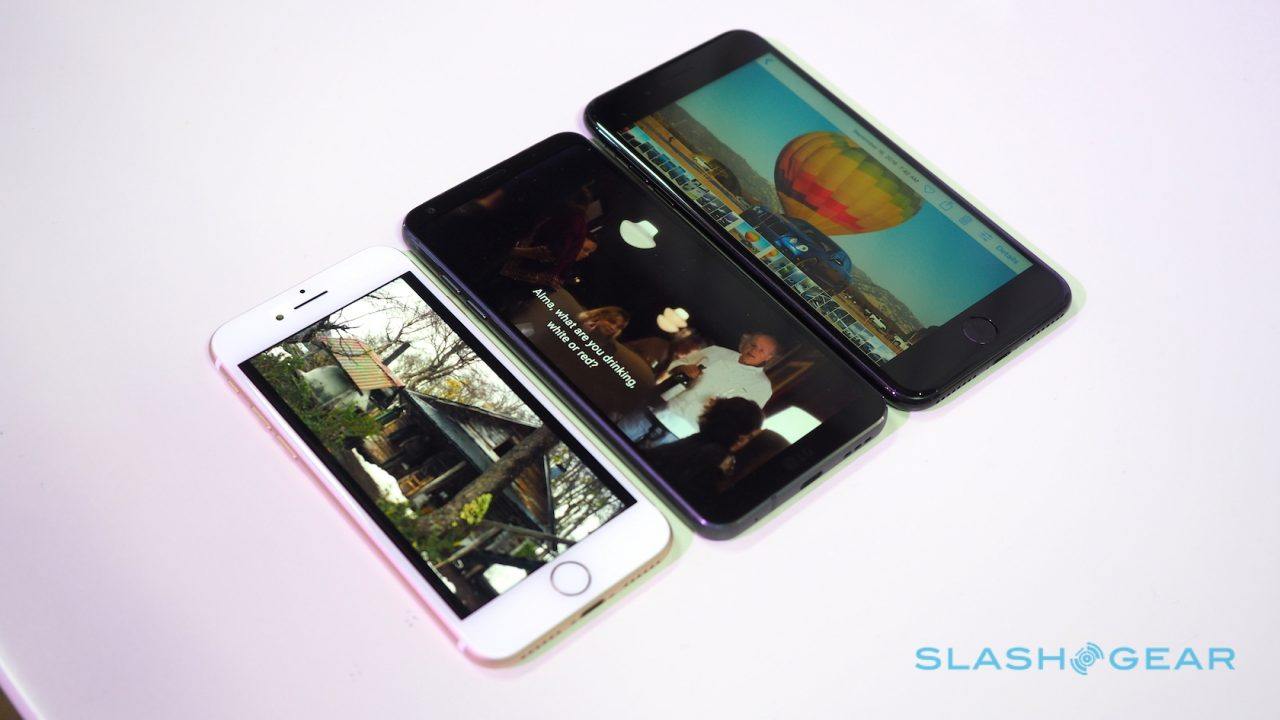 That focus on easy grip continues to the flat sides. Unlike the Galaxy S7 edge, with its dramatic tapers, the G6’s 148.9 x 71.9 x 7.9 mm chassis feels practically slab-sided; LG, however, tells me that’s intentional, since those super-slim edges are another common point of display failure in drop situations, while also being less than ergonomically comfortable when you’re trying to grip the phone and reach across with your thumb. Unlike the predominantly metal-bodied G5, LG has switched to glass for the back of the G6, something it concedes is a stab at the likely design trend for 2017.

Still, it’s Gorilla Glass 5 on the rear, which has some decent impact- and crack-resistance credibility. The front uses Gorilla Glass 3. Three colors will be offered – platinum silver, white, and black – with the latter being a real fingerprint-magnet. There’s no rear camera bump, but it’s fairly easy to smudge across the lenses. 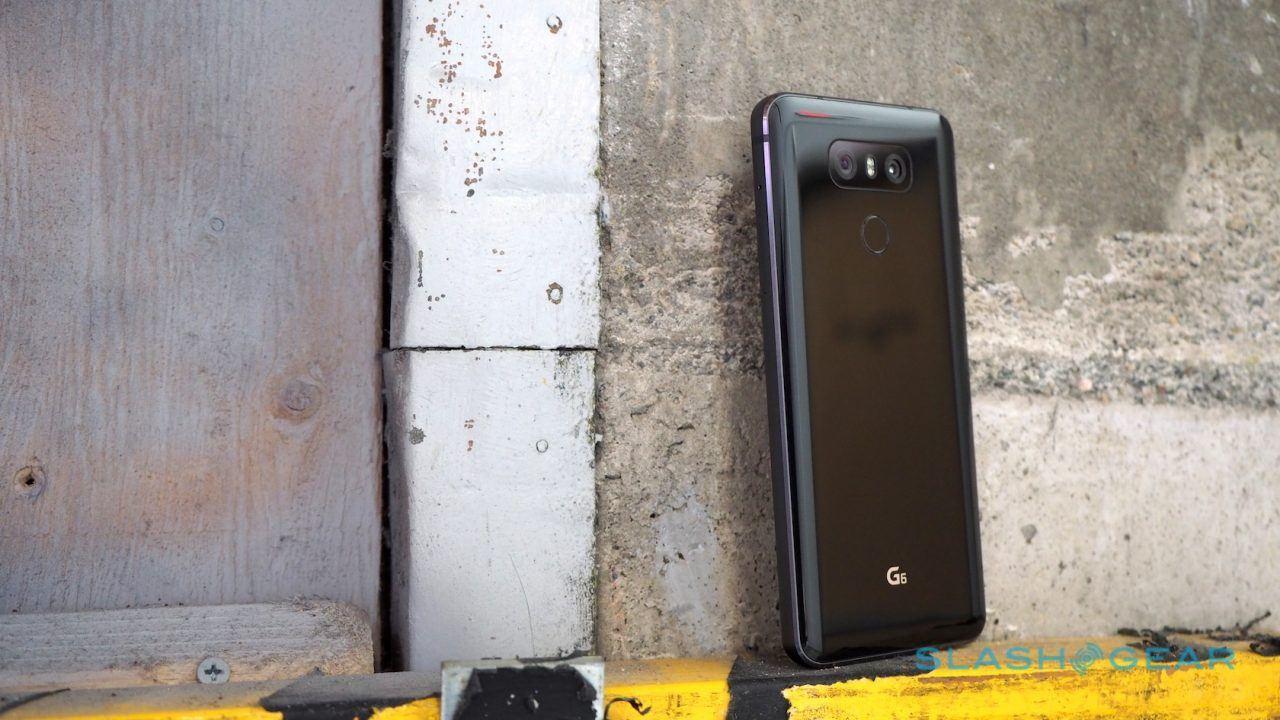 Further differentiating the G6 from the G5 is the absence of a removable battery. It’s an inevitable compromise involved in making the new smartphone waterproof: the G6 is rated for IP68, which means you can submerge it under 1.5m of water for 30 minutes. Interestingly, LG went the extra mile and made sure the smartphone could handle seawater as well as the pure water IP68 usually accounts for; even the 3.5mm headphone jack can handle saltwater, rather than mistaking it for a set of headphones being plugged in. Unfortunately while you can take the G6 into the shower you might struggle using it: water falling across the touchscreen prompts a riot of touch responses making it all but unusable.

Safety from water isn’t the only advantage by making the battery non-replaceable. The G6 also has wireless charging, in this case courtesy of Qualcomm’s Quick Charge 3.0, and by doing away with user-accessibility LG has been able to fit a significantly larger battery too. The 3,300 mAh pack should get to 15-percent in 10 minutes on a Quick Charge 3.0 compatible adapter; 30 minutes should get it almost half-charged. It supports both Qi and PowerMat standards, and you can charge it while it’s wet, too. 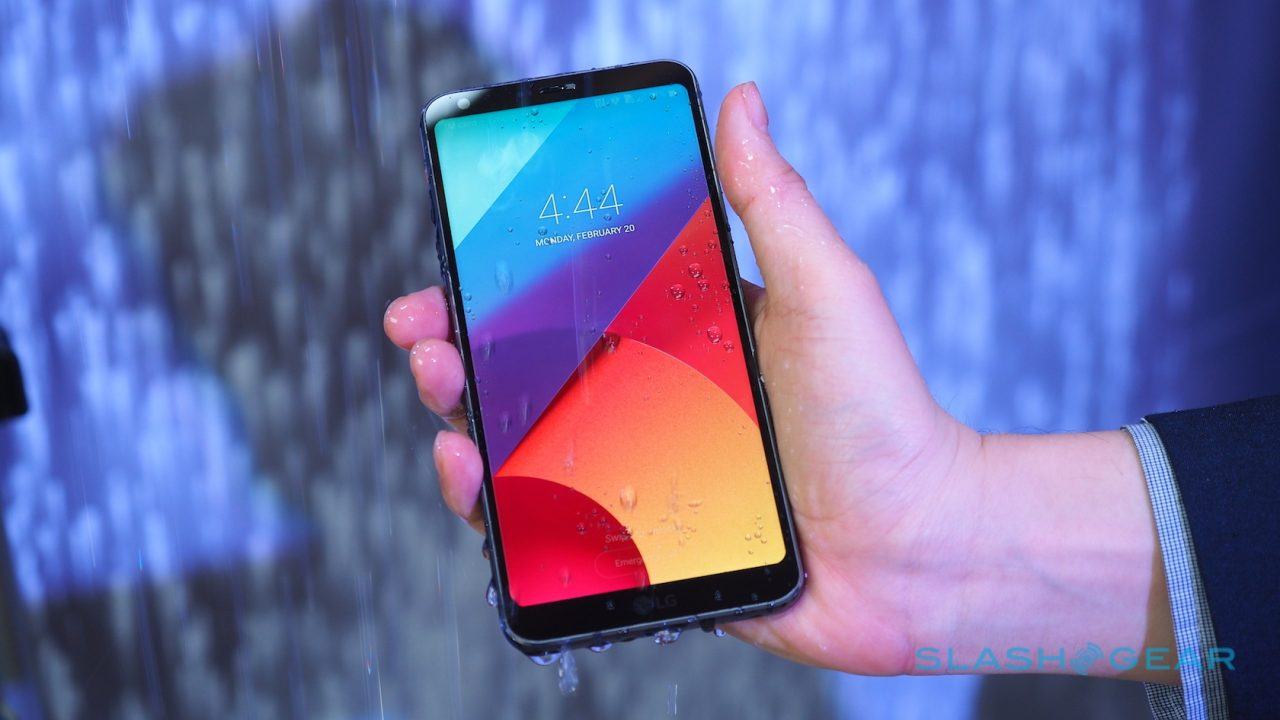 Given Samsung’s woes with batteries in 2016, LG is making a selling point out of its testing procedures. In fact, I spent a considerable amount of time touring the company’s battery testing lab, including watching a battery pack get staked right through with a high-speed nail. You’ll be pleased to hear that no explosion was forthcoming. LG says its tests actually go above what’s commonplace in the industry, including how hot the battery can get without being impaired. Even in the rare case that a battery does catch fire, according to the video LG showed me, the resulting blaze was contained within two feet or so.

What’s likely to be a sticking point for many Android fans is LG’s decision to go with the Snapdragon 821 rather than the newer Snapdragon 835. We can argue about why that’s the case – some say Samsung has earmarked all of Qualcomm’s first batch of chips for the Galaxy S8; LG insists that the 821 is probably more reliable since, with its engineers now on the third-generation, they’ve worked out the majority of the lingering kinks – but it’s worth noting that some of the 835’s talents have been ported back to the 821 for the G6. 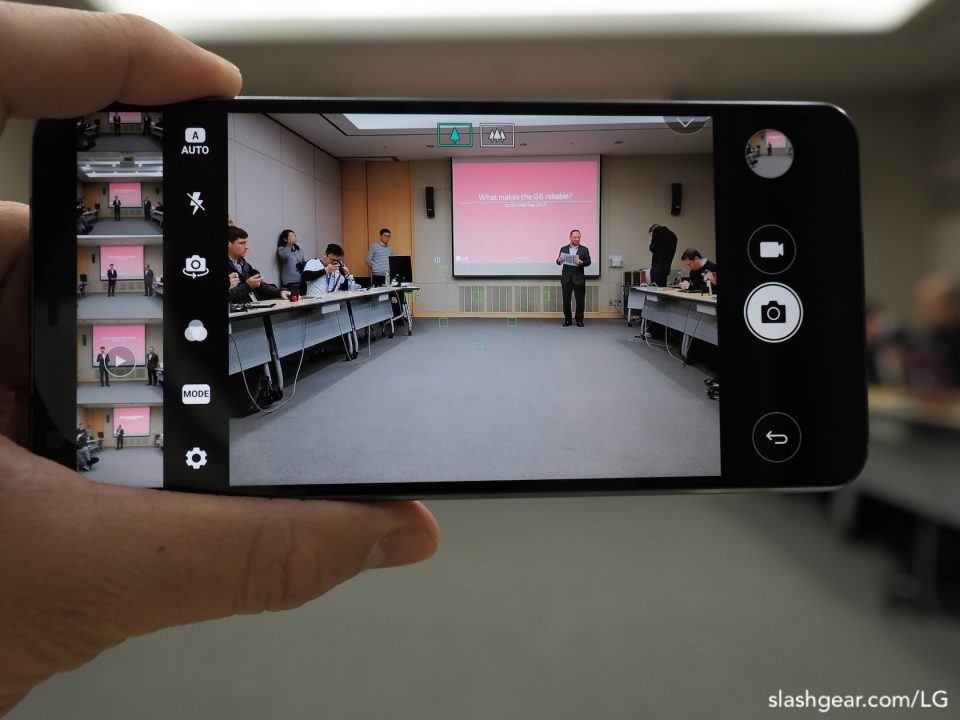 An example is the transition between the G6’s two rear cameras. On the previous LG phones, the two sensors had different resolutions – one 16 megapixel and one 8 megapixel – and also get different lenses, one 71-degrees and the other 125-degrees. Because of that, there was a noticeable jolt in the camera preview on the G5 as you slid your finger from telephoto to wide-angle and back again. Qualcomm baked some magic into the Snapdragon 835 to smooth that out, and then brought it to the 821 for LG. Sure enough, there’s only a very minor blip as you switch between the regular and almost comically-wide lenses. On the front, there’s a 5-megapixel camera with a 100-degree wide-angle lens.

All the same, I can’t help but wonder if LG might be falling short in 2017 with its camera strategy. You don’t get optical image stabilization on both cameras – the normal one has it, but the wide-angle does not – and while there’s HDR video recording, it tops out at 1080/60p. It’s too early to say how photos and videos hold up since the G6 I’ve been trying is on non-final software; the PDAF (pixels for phase detection) autofocus does okay, but falls short of the near-instant lock a laser autofocus system boasts. 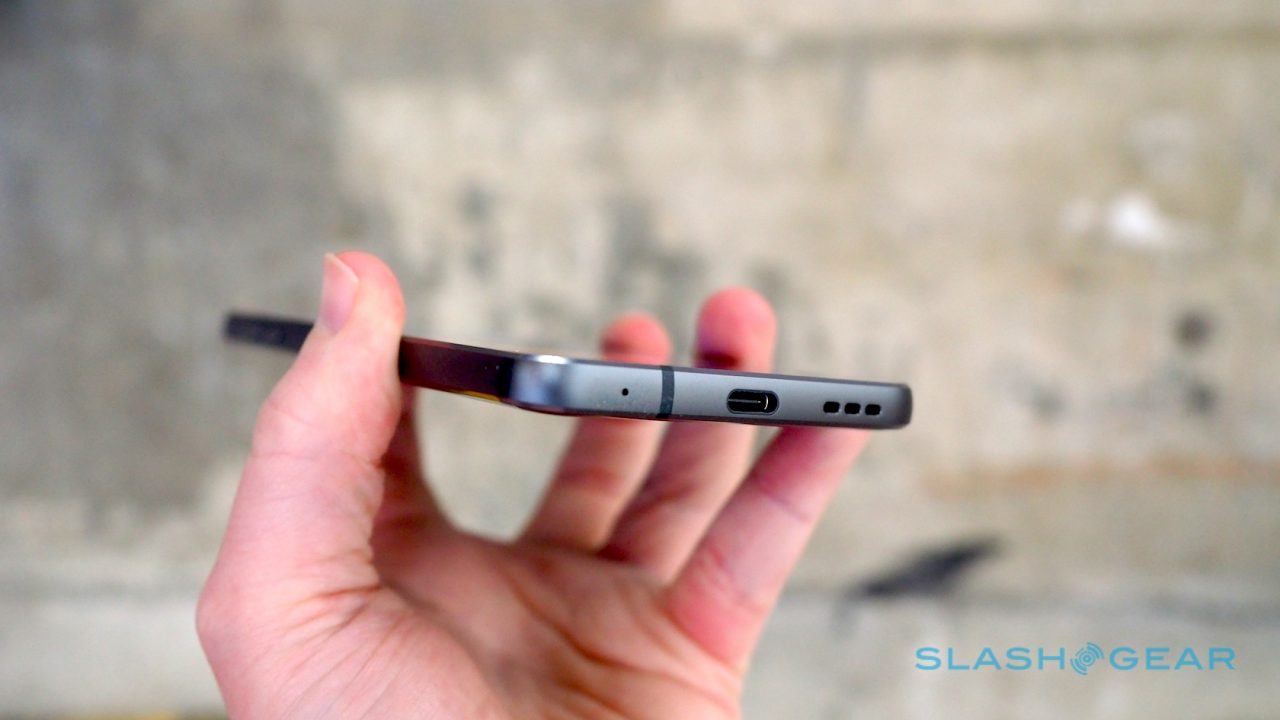 Unlike the three microphones found on the LG V20, the G6 gets only two. When you’re holding the phone in portrait orientation, only the top microphone is used; in landscape, both are used, capturing stereo sound. There’s a Pro mode in the camera, with options to control the gain, LCF, and LMT, as well as manually switch on the Wind Noise Filter. Gain is set to zero by default; I’ve found that, in loud environments, it pays to tweak it depending on where your subject is talking from.

Really, though, it feels like LG’s attention has been on how the camera is used and how it plays with the 18:9 screen. Some of that feels more gimmicky than others: for instance, you can set the G6 to snap square images, with a live preview on the top half of the display and a side-swipable carousel of captured pictures on the lower half. Guide Shot overlays translucent framing for “perfect” staging of landscape or portrait scenes, while Match Shot takes different top and bottom halves of an image and combines them. Grid Shot puts a combination of four pictures or videos together in a 2×2 frame. 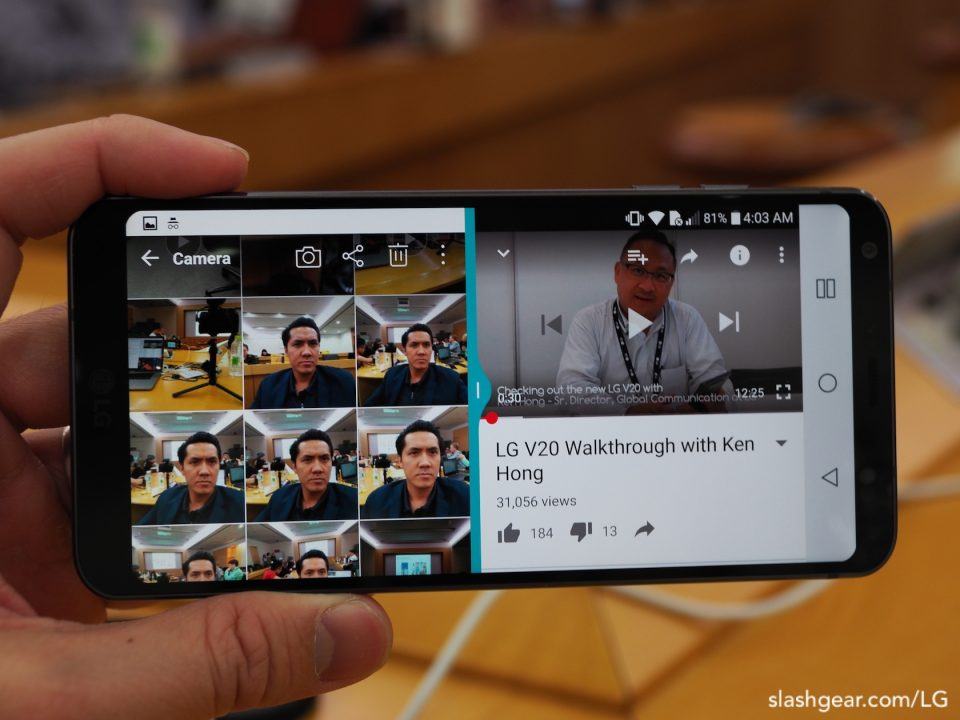 Honestly, though, I think the most useful improvements are the more basic ones. The switch to 18:9 has left sufficient space for a full carousel of thumbnails running down one side of the camera app when held in landscape orientation, for instance. It’s much easier to scroll through there than tap into the regular gallery. Pictures look great on the HDR and Dolby Vision compatible display, which helps pull out greater dynamic range and makes colors punchier. You notice it most when you compare the G6 side-by-side with a phone that has a non-HDR panel.

That said, other phones offer more flexibility. LG will only be offering 32 GB of storage on the US-spec G6, though there’s a microSD slot to augment that. I suspect that slotting a memory card in will be a must: after restoring the G6 from my Pixel XL, I had only 10 GB of space left (and that’s without any games). Versions of the phone intended for Asia will get a Quad DAC for better audio, which US phones miss out on; however, the Asia-spec G6 doesn’t have wireless charging. Only select markets – not, sadly, the US – will have dual-SIM support. 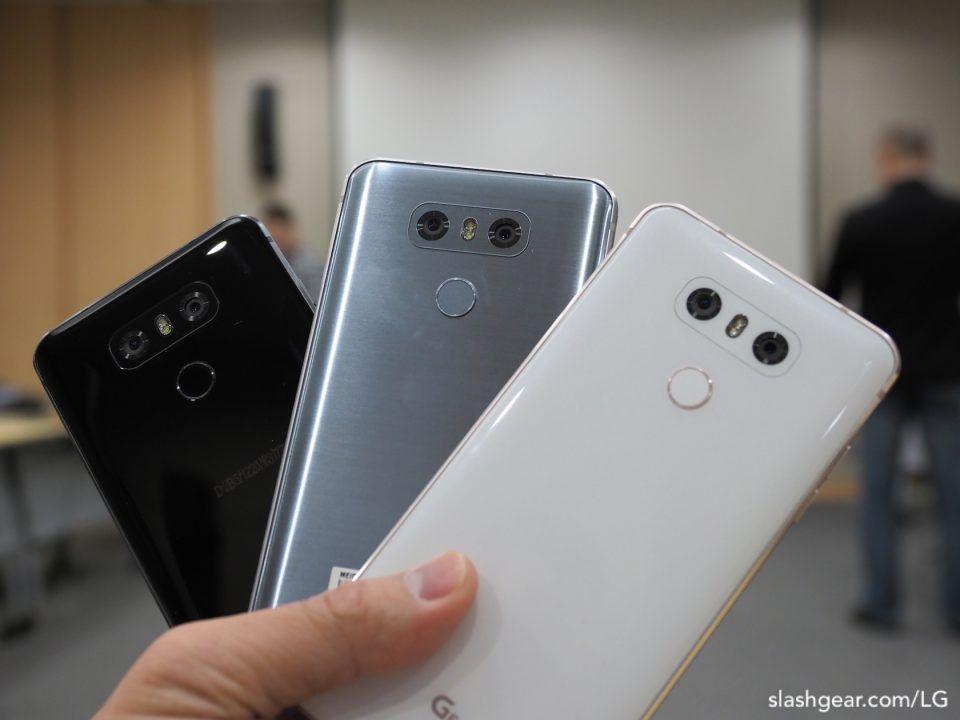 Out of the box, the G6 will run Android 7.0 Nougat. Unusually, it’ll also get the Google Assistant, the first phone other than Google’s own Pixel to do so. LG’s UI has been revamped for 2017, with on-screen elements getting rounded corners to match the display itself; colors are more vivid, in the process fitting in more with Google’s Material Design, though LG tells me that was more coincidence than anything else. Multi-taskers will like the Splice View, which splits the display in half.

All in all, the G6 offers a gorgeous display in an impressively slender form-factor, making for a phone that’s much easier to hold and operate with one hand. While the G6 falls short of earth-shattering innovation, I appreciate LG’s focus on the core performance of usability, reliability, and performance. Whether that’s all enough to take on the upcoming iPhone 8 Samsung Galaxy S8, though, remains to be seen.