Windows 8 officially launched last week, which means that a ton of new computers, laptops, and tablets are either on shelves now or coming up soon. By far one of the most interesting new Windows 8 machines is the Lenovo IdeaPad Yoga 13, a new convertible that aims to show off Windows 8 in all of its touch-based glory. The major selling point of the Yoga 13 is its 360-degree hinge, which allows you to use the laptop in a number of different ways. It’s certainly cool, if not a little strange at first.

If you couldn’t already tell, I haven’t used very many convertibles. I was never really sold on the idea of a tablet/laptop hybrid, but with what I’ve seen of the IdeaPad Yoga 13, I might be singing a different tune by the time everything is said and done. The Yoga 13 impresses right out of the box – the silver chassis looks sleek, and I was actually surprised by how light it is. I was certainly expecting heavier than 3.3 pounds, though with that weight, the Yoga 13 still has some heft that you won’t find in traditional ultrabooks.

The screen is really nice as well, though again a little unconventional as far as ultrabook screens go. Instead of running at the 1366×768 resolution we’re all so bored with, the Yoga 13’s touch screen is running at 1600×900 resolution. It’s an odd resolution that we don’t see to often in notebooks, but it’s a welcome change. The visuals are sharp and touch is responsive. This plays hand-in-hand with the touch-friendly tiles in Windows 8; even when using the Yoga 13 in notebook mode, I’m finding myself using the touch screen instead of the track pad. I said in my Windows 8 review that the operating system was clearly geared toward touch screens, and the Yoga 13 backs that assertion up. 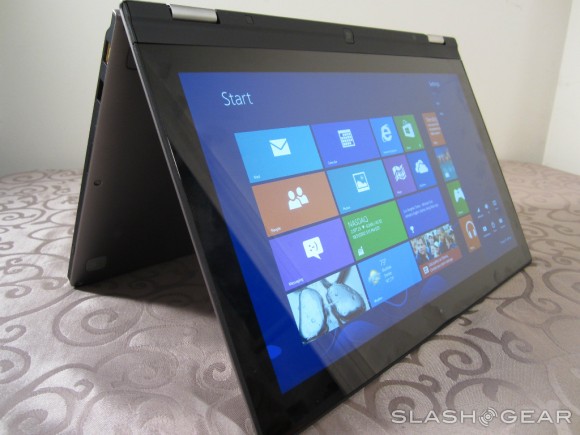 There are four different “modes” Lenovo has been pushing with the Yoga 13: notebook mode, which is self-explanatory; stand mode, which allows the user to place the keyboard face-down with the screen angled upward; tent mode, which has the user standing the laptop up on its ends like a little mini tent; and tablet mode, achieved by folding the screen all the way around to the underside of the notebook. Tablet mode feels a little strange at first due to the fact that the keyboard is exposed on the slate’s backside, but thankfully the keyboard and trackpad are both disabled when you’re using a mode other than the traditional notebook setup. This means that you don’t have to worry about hitting keys and screwing everything up while using the machine in tablet mode.

On the inside, there isn’t too much deviation from the hardware found in other ultrabooks. We’ve got a third-gen Intel Core i5 processor clocked at 1.7Ghz – essentially the industry standard for ultrabooks – working alongside 4GB of DDR3L RAM, making the Yoga 13 quite the little speed demon. That’s all helped along by the 128GB SSD, so if it’s speed you want, the Yoga 13 probably isn’t going to disappoint. On the outside, the pickings are a little slim, as you’ve only got one USB 3.0 port and one USB 2.0 port to take advantage of. Those are joined by a 2-in-1 card slot (SD and MMC), a headphone jack, a full-size HDMI port, and of course, the jack for the power adapter.

I’m impressed with what I’ve seen of the IdeaPad Yoga 13 so far. There are certainly aspects that are going to take some getting used to, but I’m looking forward to spending more time with the Yoga 13 and seeing all that it and its 360-degree hinge have to offer. My full review of the IdeaPad Yoga 13 will be coming up shortly, but in the meantime, let me know if there’s anything in particular you’d like me to touch on. 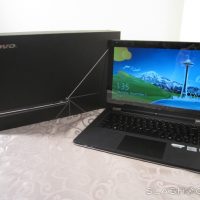 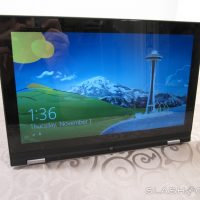 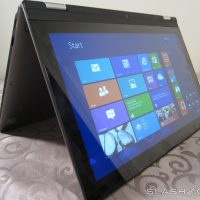 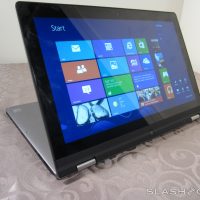 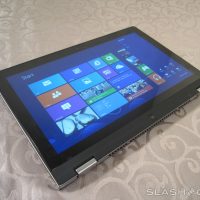