Lemmings makes a surprise comeback on iOS and Android

In what comes as a surprise to pretty much everyone, Sony has both announced and launched a new Lemmings game. Though the Lemmings series has been around for decades, we haven’t seen a new game in it for quite some time. Even more surprising is the fact that this is a mobile title for iOS and Android, despite the fact that Sony is seemingly handling the publishing duties on it.

Lemmings actually seems pretty well-suited for smartphones, but developer Sad Puppy games had to make some changes to the core experience to make the transition work. The game is played in portrait mode, which means that the levels have more verticality than they did in previous games. You’re still attempting to guide Lemmings safely to the exit of each stage, though, so that the basic concept hasn’t really changed all that much. 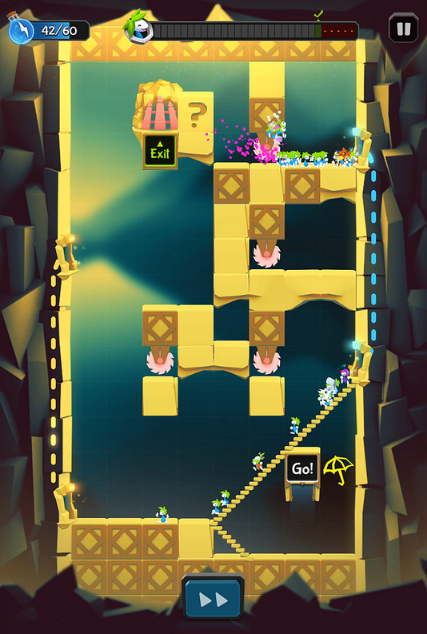 I took it for a bit of a spin myself after reading the announcement, and it’s certainly a Lemmings game. It’s also a free-to-play mobile game, which means that almost everything you do is tied to an energy system. Want your Lemmings to build some stairs? That costs energy. The same is true for digging and placing umbrellas, which are frequently necessary if you don’t want your Lemmings to fall to their deaths.

So, no matter how efficient you are at getting your Lemmings to the stage exit, you’ll likely run out of energy at some point. It recharges over time, but you can speed up the process and buy a refill with gold. Gold is also used to summon unique Lemmings – each of them belongs to one tribe or another, and Sad Puppy says in a post to the PlayStation Blog that collecting all of the Lemmings in an individual tribe will yield “big rewards.”

And there we have it: a new Lemmings game that sports a rather straightforward freemium models with even some gacha elements tossed in for good measure. The game is available today on iOS [download] and Android [download], so if you spent an absurd amount of time accidentally killing hordes of Lemmings when you were a kid, it might be worth checking out.