Fans of superhero movies may be looking forward to the 2022 reboot of the Batman franchise. The film due out next year is called THE BATMAN, and in the film, a new Batmobile will be seen for the first time. Ahead of the movie’s debut, Lego has a new Technic kit to construct the Batmobile from the film.

The kit is large with 1360 pieces and is rated for ages ten and up. One of the more interesting aspects of the blocky model is that it comes with a pair of light bricks with one red and one yellow. The red brick is designed to add a glow to the engine at the back, while the yellow brick lights up the front grill.

Like most Technic kits, this one has steerable front wheels, a differential on the rear wheels, a spinning flame, and opening doors and hood. The Lego Technic THE BATMAN Batmobile building set is number 42127 and can be preordered now for $99.99. Some other nice touches for the model include an engine with moving pistons.

Lego says the vehicle is made for display, and it’s quite large. The model is over four-inches tall. It’s over 17-inches long, including the rear flame, and six-inches wide. It’s difficult to tell what vehicle inspired the Batmobile for the movie. 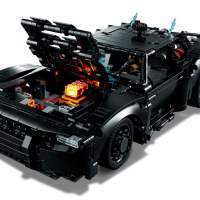 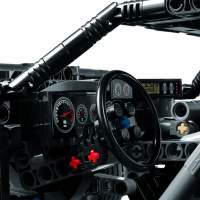 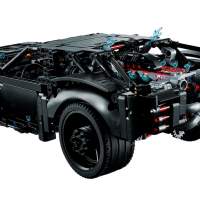 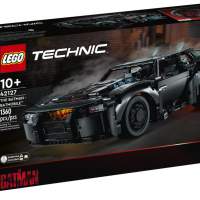 The car is retro-looking with a design that looks more like a muscle car from the 60s than anything in modern times. We can almost see a bit of 60s Camaro in the design, particularly in the front. Perhaps the movie will shed more light on the origins of the new Batmobile when it debuts in theaters next year. Currently, Lego lists shipping for the building kit on November 1, 2021. That means it should land in time for the holiday season.