LaCie 12big Thunderbolt 3 offers up to 96TB of space

With a name like “12big”, you know that you’re in for something huge. That might not be anything new if you’re already a fan of LaCie‘s storage boxes, but the promise of 96 TB, that’s terabytes, of storage for a workstation PC is still something that sounds to good to be true. But that’s exactly what this latest incarnation of LaCie’s 12big “tower” promises, pairing Seagate’s fastest hard drives with the new Thunderbolt 3 spec to deliver all that a multimedia wizard needs to create high quality, high resolution, and high file size content.

Of course, regular consumers probably have no use for that much space, though this LaCie 12big also comes in a 48 TB configuration. No, this product is squarely aimed at professionals, those whose lives are intricately intertwined with the capture, creation, and editing of content that would burn through your ordinary hard drive in just a few minutes. Yes, we’re talking here about 4K content that is still slowly but very surely becoming the holy grail of video content.

To that end, LaCie mixed up a few technologies in the 12big that work in harmony to deliver not just storage space but speed as well. As the name implies, the 12big has 12 hard drive bays that can accommodate 4, 6, and 8 TB HDDs. Not just big HDDs, mind you, but Seagate’s enterprise-level 7200 rpm drives. Which means five-year limited warranties for each one.

But while the drives themselves might be fast, that advantage might be moot if the data isn’t able to flow as quickly from computer to drive. That’s where the Thunderbolt 3 part of the 12big comes in. The latest evolution of the connection standard, Thunderbolt 3 not only promises faster data transfers but also larger power capacities. Working together, the LaCie 12big Thunderbolt 3 boasts of an astounding 2,600 MB/s data rates, 2,400 MB/s in RAID 5 even. 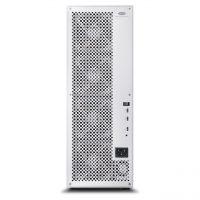 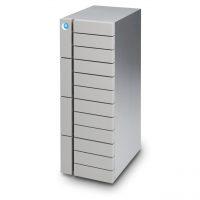 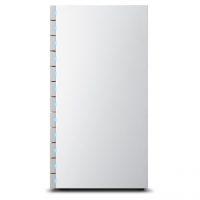 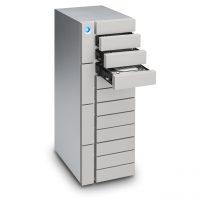 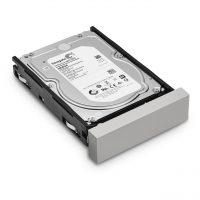 As an added bonus, that Thunderbolt 3 connection can be used to daisy chain two 4K displays or even power a laptop if needed. That said, as it uses Thunderbolt 3, USB Type-C laptops are the immediate beneficiaries of this connection, though LaCie also includes a USB C to A cable.

The LaCie 12big Thunderbolt 3 tower will launch in summer and will be offered in configurations of 48, 72, and 96 TB storage. LaCie remains tight-lipped about the price, but considering those specs, not to mention its intended audience, do expect it to cost quite a fortune.