Over the years, you’ve probably been able to discern that we have a natural fondness for steampunk. We just can’t get enough of it. And, we especially love when designs take on the popular trends in tech. Like, for example, the growing need to see things in 3D. There’s no stopping it, so we might as well embrace it. Which becomes increasingly easy when we see things like the Kraken Steampunk 3D goggles.

We’ve got to give these the thumbs up simply because they’re not glasses. They aren’t the huge, Buddy Holly-looking things we’ve all come to expect when we go to the theater and see our next 3D flick. Nope. These are big, wrap-around goggles, and those are awesome. Better yet, the designer, Will Rockwell, used Real3D glasses, which means you can use them in theaters all you want. 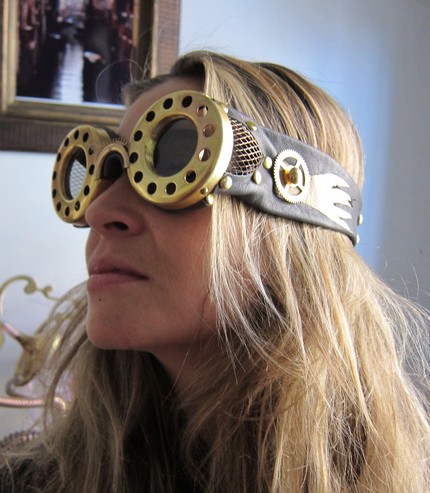 We can’t imagine they weigh too much, but they’re probably heavy enough to make it apparent you’ve got them on your head. As you can see from the model above, you’ll look unique, if anything else, so don’t be surprised if people are watching you, rather than the movie. You can go by them right now for a cool $200, and as of the time of this writing, there seemed to be only one in stock. So . . . You know, you might want to hurry.

[via Etsy; thanks Will!]