Wiimote, PS Eye/Camera/Move, Kinect, Oculus VR. Gaming, at least the hardcore kind, is moving towards a trend that ditches controllers and screens for the instruments that we already have: our bodies. But while our eyes, ears, and hands are more less fooled and pulled into the illusion, the rest of our bodies aren’t so much. Until now, that is. Introducing KOR-FX, a gaming vest with a haptic feedback system. In short, it lets your upper torso feel almost everything you should be feeling if you were actually living inside the game.

OK, it is “cheating” a bit. It isn’t exactly letting you feel everything but only what you would be hearing. Sounds a bit confusing? Think of it like surround, except that the audio is converted into directed haptic feedback that resonates inside your chest to effectively fool your brain that a bullet did pass you by, for example. Immerz, Inc., the outfit behind this unique product, says it uses 4DFX technology to make this happen, and the vest doesn’t make use of spinning motors to produce vibrations the way rumble packs do. 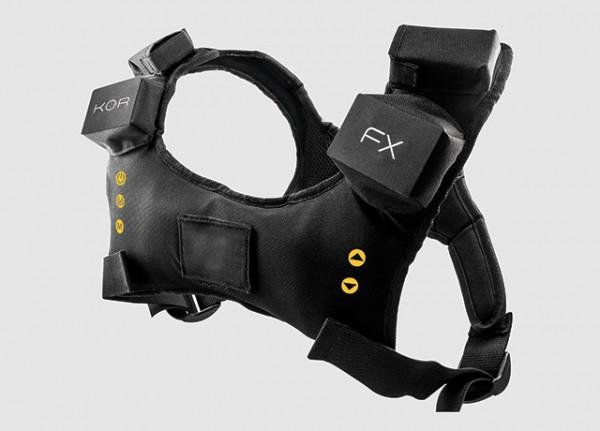 It all sounds rather dreamy on paper, but based on the feedback from their E3 demo, it sounds, no pun intended, like the real deal. It may not be able to reproduce everything that you should be feeling, but it comes pretty darn close. Basically everything that produces a sound, the more three dimensional, the better, KOR-FX will be able to make you feel it. Considering how noisy bullets are, you’re bound to get a kick, or maybe even more, when you use this for an FPS game. Don’t worry about feeling real gunshot or ricochet pain, though, as the intensity of KOR-FX’s output is pretty configurable.

As for Input, Immerz says that any device that can output sound via a port can be a source for the vest. So that includes, of course PCs and gaming consoles, but even tablets are also invited to the party. Given the way the vest bridges audio and haptic feedback, it can also be used for more serious game training the likes of which you’d see in e-sports, training your body to react to sound cues. Of course, it can be used for some good old-fashioned goofing off, especially when you thrown in a VR headset. Sure, you might look like a SWAT member with a bulletproof vest, that will ironically actually make you feel the bullet rather than protect you from it, but you can brag about all the feels to your non-KOR-FX-vested gaming buddies.

KOR-FX isn’t something you can buy off shelf and take home with you just yet. It is still in a Kickstarter period that will end in 9 days after bagging almost twice its $75,000 funding goal. The lowest tier that will get you one unit is at $150, throw in $25 more to get a backer tee along with it. KOR-FX is slated to ship September this year, but, given how things like this usually go, expect some delays along the road.