Autonomous driving is often spoken of in absolutist terms: cars either drive themselves, or they don’t. In reality, there’s a huge technological grey area that occupies the space between those two poles, and at least for the foreseeable future, it’s this undiscovered country that is going to play the biggest role in the eventual transition to self-driving landscape.

Kia isn’t necessarily a name that is associated with being at the forefront of autonomous vehicle research, but the Korean company has invested a significant sum in the exploration of the different shades of self-driving automobiles and how they will impact the people they are designed to serve. It’s this willingness to focus on the human side of the autonomous equation, as well as a healthy dose of pragmatism, that makes Kia’s self-driving approach an intriguing one.

I was recently invited to Kia’s corporate proving grounds at the edge of the Mojave Desert in order to sample the fruits of its autonomous driving program – now dubbed DRIVE WISE – in an environment designed to simulate the entire range of on-road situations that might be encountered by modern commuters. The vast test facility played host to Kia’s two self-driving stars: a pair of battery-powered Soul EV crossovers outfitted with the latest in sensor and processing technology from the brand.

Before we were sent out on the virtual road, we were introduced to the concepts governing Kia’s interest in autonomous driving. The company’s engineers use the SAE’s six levels of self-driving technology as their guide, with ‘0’ representing no intervention from the vehicle and ‘5’ describing an automobile that doesn’t require any driver input.

At this point in time, Kia has focused its efforts on levels 2, 3, and 4, which range from a combination of automated driving systems requiring some human intervention up to a car that, in specific situations, can entirely drive itself. Think of Level 2 as encompassing something like automated parking, Level 3 including follow-along cruise control, and Level 4 a driver-initiated self-driving program.

This wasn’t my first time sitting in the passenger seat of a computer-controlled Kia. Just a month beforehand I had visited the automaker’s research and development center in Namyang, South Korea, for an early preview of its autonomous program. There were several key differences, however, between my first taste of the Soul EV’s self-driving charms and what was on the docket at the California proving grounds. 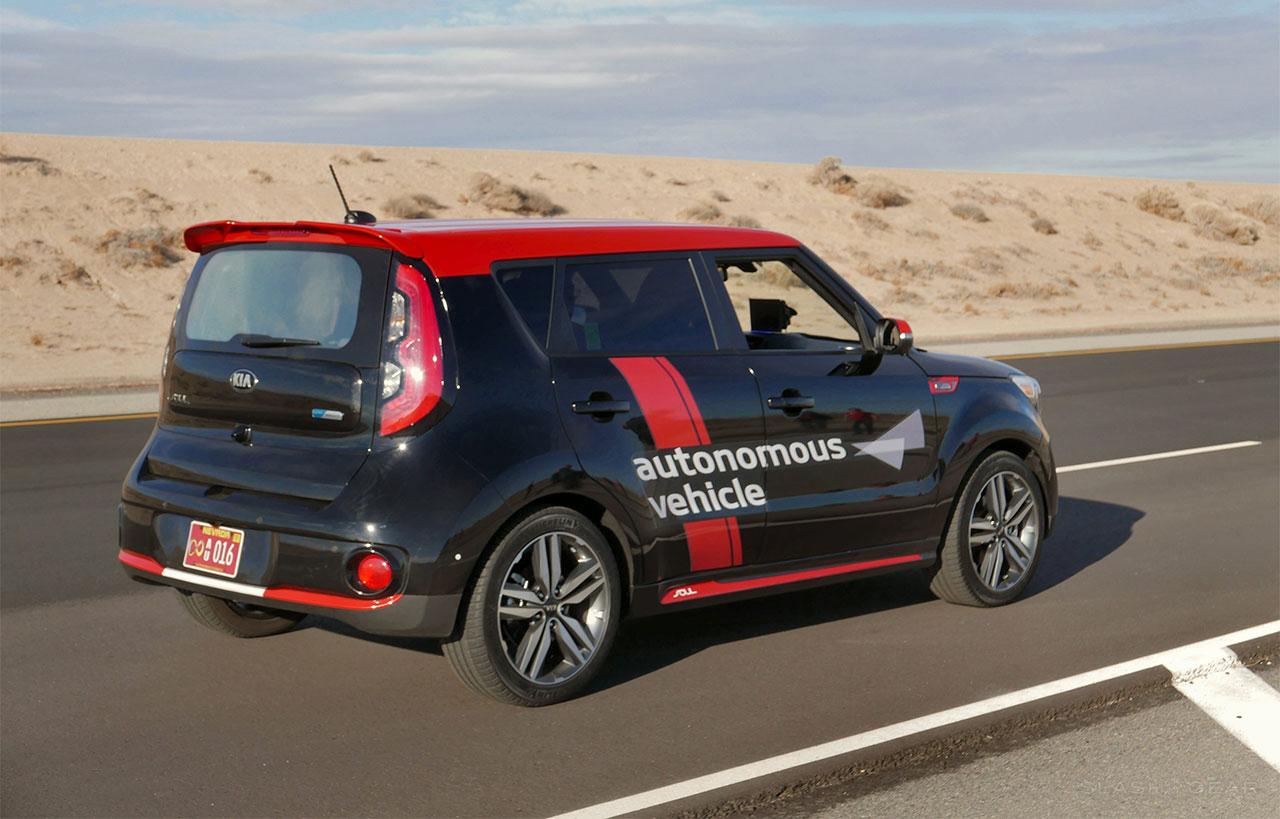 Most important was the environment used to demonstrate Kia’s latest suite of autonomous features. Whereas the Namyang experience had been limited to essentially a large parking lot course laid out with pylons, the proving grounds offered a network of stop signs, traffic lights, highway passing and merging, as well as traffic and other emergency situations, all of which offered a far more realistic example of the world autonomous automobiles will be facing on a regular basis.

The engineers in attendance also seemed to have a much greater confidence in the product itself. Gone was the hesitancy I had seen in Korea regarding certain features – questions were answered quickly, the vehicle was never second-guessed by the chaperone behind the wheel, and the entire demonstration went off without a hitch – something that couldn’t be said about my earlier encounter.

Hands Off The Wheel, Please

Ensuring that the autonomous Kia Soul EV can find its way down in total safety requires the collusion of a long list of technologies. First and foremost are the suite of sensors attached to the vehicle itself, which includes lidar, radar, and a number of cameras providing 360-degree coverage of the area immediately surrounding the crossover. The information gathered by these sensors is combined not just with GPS information, but also a set of extremely detailed maps in order to determine the Kia’s exact position. This latter detail is important, as GPS technology simply isn’t accurate enough to use as the sole method for keeping track of the car.

The Soul EV I rode in featured two distinct autonomous driving programs, split into urban and highway settings, as well as a self-parking and un-parking system that can be accessed from outside the car. To get started, the driver must select the appropriate program in our case urban, which combines with the pre-selected destination information in the vehicle’s navigation system to get your from A to B. The Soul stopped at red lights, gates, and stop signs without any drama on our way from the proving ground parking lot to the highway entrance that served as the entry point to the second half of the demonstration. It did this despite the relatively busy nature of Kia’s facility, which included traffic at all times from other vehicles being tested by human pilots.

The autonomous Soul required that our driver merge from the entrance ramp before engaging the highway program – remember this is a Level 4 car – but once there, the computer system took over. It was then time to show off its abilities, steering through Kia’s six mile oval in dense, bumper-to-bumper traffic, then dealing with being cut-off by other motorists, and finally even offering up the ability to pass a slower vehicle on either the right or the left-hand side using the simple touchscreen menu that popped up on the infotainment panel (a secondary panel, perched on the dash, offered more specific running commentary on the car’s decision-making processes).

The most dramatic aspect of the experience occurred when our engineer ‘played dead’ at 74-mph, slumping in his seat so that the car would detect that he had been incapacitated and automatically pull over safely to the side of the road. Once it had done so, it also called ’emergency services’ automatically – in this case, Kia’s own rescue vehicle – which linked up with the car using an electronic tether that allowed us to follow the rescuer off of the track to safety.

As impressive as Kia’s autonomous Soul EV was at the company’s proving grounds, many questions about self-driving cars remain unanswered. How will sensors deal with snow, ice, and salt impacting their ability to ‘see?’ What are the legal implications of being involved in an accident while riding in an autonomous car? How will a vehicle decide what to do if it’s faced with the choice of hitting a pedestrian or another automobile out on the road? 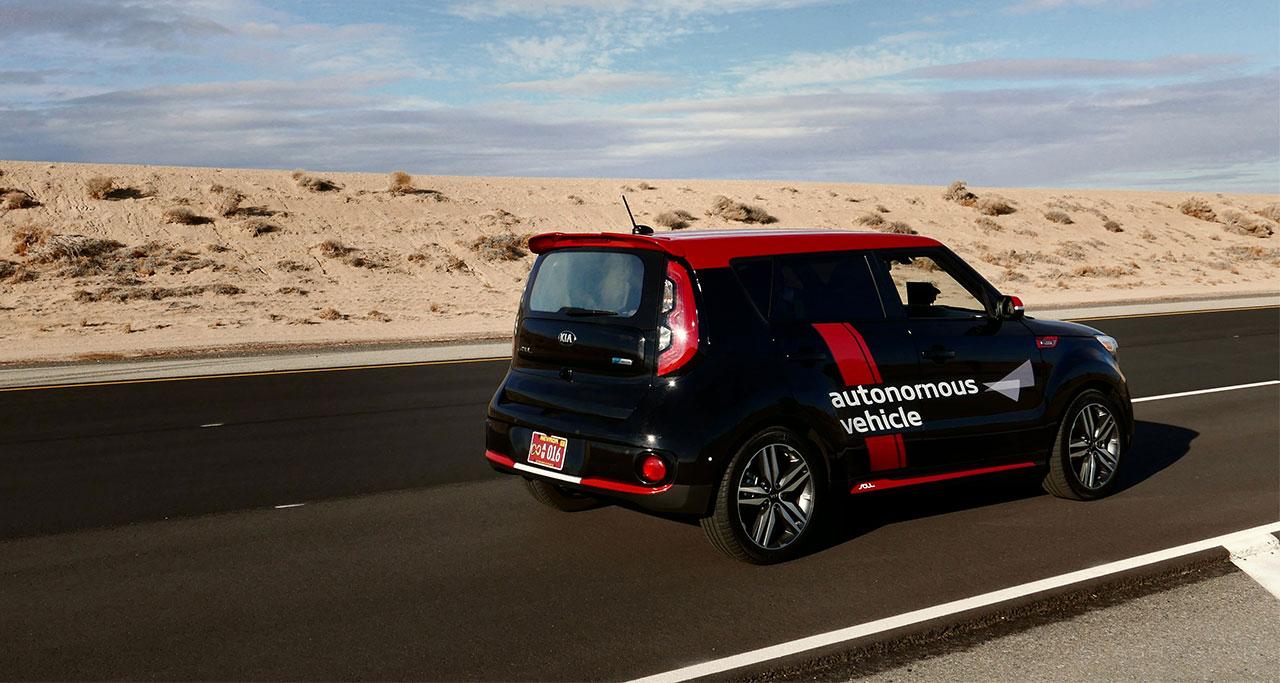 To its credit, Kia’s design team was frank about not having all the answers to these questions. Rather that simply gloss over the issues, the research and development engineers felt comfortable saying ‘we don’t know’ when pressed about the perils of autonomous cars. It was also clear that Kia has no specific agenda for introducing a self-driving car to the market. Instead, it’s content to take a wait-and-see approach in terms of introducing these technologies one at a time to gauge customer acceptance in real-world scenarios.

Autonomous cars might be on the horizon – but that horizon doesn’t seem to be getting all that much closer as the years go on. Kia’s willingness to invest in autonomous research, and to welcome discussion and debate about the best ways to integrate this technology to help drivers rather than seeing the question solely in black-and-white, autonomous-or-not terms is a laudable strategy that should help in the slow adjustment of the auto market to the potential benefits of self-driving features.