Kepler-160 and KOI-456.04 are the most Sun and Earth-like system ever discovered

Scientists have discovered more than 4000 exoplanets so far, and to date, the system most like the Earth and Sun are Kepler-160 and its companion KOI-456.04. The system has a star-planet distance that could permit planetary surface temperatures to support life. A team led by the Max Planck Institute for Solar System Research discovered the system.

The host Star Kepler-160 emits visible light while the central stars of almost all other exoplanets emit infrared radiation. Most stars are smaller and fainter than the Sun and belong to the red dwarf star class. Scientists say that the full picture of habitability on an exoplanet depends on the qualities of the star as well as the planet.

So far, almost all exoplanets are less than twice the size of Earth that has the potential for clement surface temperatures and orbit around a red dwarf. Due to the tendency of red dwarf stars to emit hi-energy flares and fry orbiting planets, the habitability of any planet around a red dwarf is heavily debated. The newly discovered star system is at a distance of just over 3000 light years from our solar system. 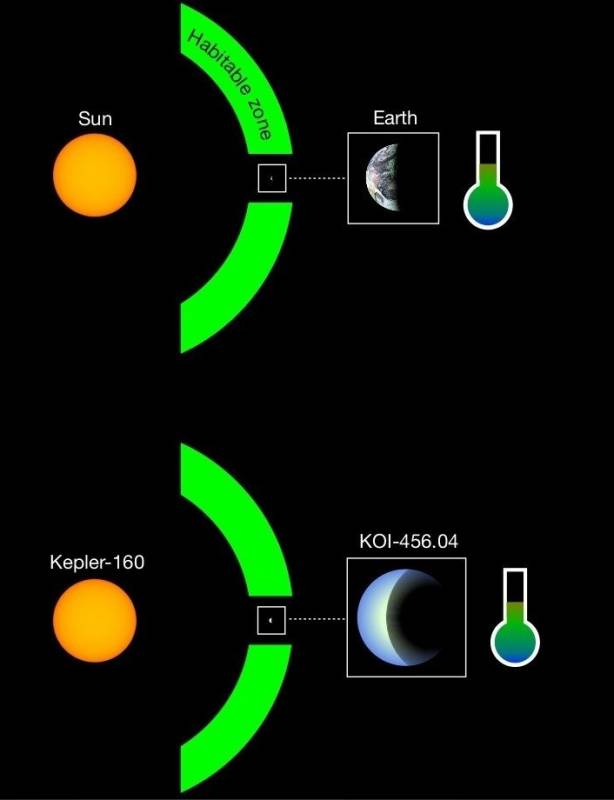 The Kepler-160 star has a radius of 1.1 solar radii and surface temperature of 5200 degrees Celsius, which is 300 degrees less than the Sun. It also has a very Sun-like stellar luminosity making it very similar to our star. That star is believed to have four planets orbiting. The planet also has a very Earth-like orbital period of 378 days.

The scientists say that KOI-456.04 sits in a region of the stellar habitable zone and orbits a star that could support life. The planet could have liquid surface water and is considered potentially habitable. This is assuming that the atmosphere of the planet is not too massive and non-Earth-like. The scientists say that the planet would receive about 93% of the amount of sunlight the Earth receives from our star and would have the surface temperature of +5 degrees Celsius on average, about 10 degrees lower than the mean global temperature of the Earth. Researchers admit that the planet may not exist, but they are 85% Pro planet at this time.