Just Stay Away from Console Games

My son gets into the car and before I have a chance to slide into the driver’s seat and buckle myself in, he’s already reaching for the iPad. He’s fastened his seatbelt, obviously, because he knows he can’t touch the iPad until he’s buckled up. He starts with his current favorite game, Mr. Crab. The music is horrible. The gameplay is fun, especially for a 4 year old.

His gaming elicits those terrific moments of parenting that you can tell your friends who don’t have kids and they still find funny. Like when he started trash-talking his games. This happened recently. He always talked to the characters, I think that’s normal. Once he figured out Talking Tom the Cat Who Farts will talk back to him in a funny voice, the babbling from the backseat never ended.

Now, beyond the normal conversation he might have with the Toca Band players or the Angry Birds, he also doles out stern warnings and admonitions. He trash talks the AI.

“You do that again I’m gonna make you bend over and kiss your mama!!”

I never want to learn the strange sequence of misunderstandings that led to that statement. I hope he never gets it quite right.

I don’t let him bring the iPad into the house for the same reason I try not to touch my phone when I’m taking care of him. I want him to pay attention to me. There’s too much on the tablet, too many options, and far too much control. I’m not saying I avoid moving pictures when we’re not in the car. We play with LEGO bricks, we draw on his easel, and I’ll even get down on the floor and chase Matchbox cars around the carpet.

We also watch TV, and sometimes he lets me watch Phineas and Ferb, which is my favorite, instead of Handy Manny, which will make you want to poke your eyes out with a screwdriver. With a TV show, I can still engage him. We can talk about what’s going on. He loves to tell me exactly what we both just saw, in excruciating and adorably incorrect detail.

[aquote]I love that he loves Star Wars. It was his destiny[/aquote]

We don’t play console games at home. It’s not that I’m not equipped. I have a PS3 and an Xbox 360, both hooked up and ready to go. I use the PS3 to play DVDs with him. He loves Star Wars. I love that he loves Star Wars. It was his destiny. I don’t use the Xbox while he’s around.

I tried once. I bought some dance games for Kinect. I tried some simple arcade-style games, like he’d play on his tablet. He enjoyed it, but he’s not coordinated enough yet to watch a character on screen and mimic her actions before she transitions to the next dance move. He’s also not good with a controller. With a touchscreen he’s a master, but the buttons and joystick confuse him.

Shortly, I discovered the trick that all gaming parents discover. If you put a controller in your kid’s hand and sit them down in front of the TV, you can happily play your game for a good half hour or more. Your kid will think he’s playing. Even better, he’ll think he’s winning. He’ll think it was his impeccable timing that caused Lara to jump from one collapsing column to the next just in the nick of time. He’ll never catch on, either. He’ll just get bored and insist you do something else.

I’ll get into why that trick is horrible in a minute, but first I want to dwell on that last point. My kid got bored of video games before I did. Of course, he has a short attention span, and I’m trying to remedy that. I’m trying to teach him to concentrate. We read chapter books instead of picture books. I don’t let him quit building a LEGO model quite so quickly. We try to watch an entire TV show at once without getting up to play in the middle.

I want to teach him to concentrate, and concentrating on video games does not seem like the answer. Sure, he’ll learn to pay attention and love the games. He’ll learn to sit through long RPGs talking to every stupid moron in a tunic who lives in the town in the woods and raising chickens for hours on end (seriously, I hate you Final Fantasy). Maybe that’s not the type of concentration to teach him.

So, why is it cruel to hand him a joystick to shake around while I play my game? Well, first of all it’s like playing with a cat and a laser pointer. That cat has a good time chasing the dot on the floor, but what the cat really wants is to catch that dot and tear open its throat with horrible cat fangs and razor sharp cat claws. Same for my son. He might enjoy playing along as I foil the schemes of the evil Covenant army, but he really wants to win. He wants to do well. He enjoys it because he thinks his actions are causing cool, satisfying reactions on screen. 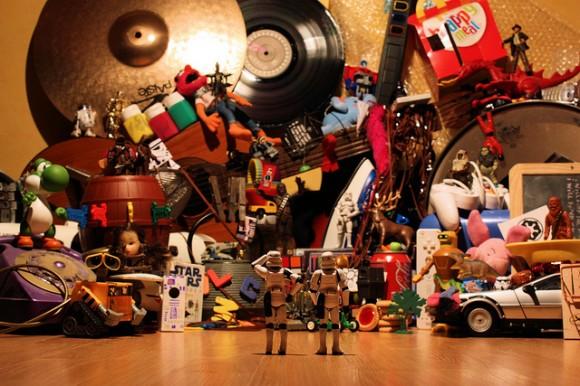 If he learned the truth, he’d stop playing and he’d trust me less. He might not even believe he wasn’t really playing, since that dishonesty would seem so severe to him. That seems a cruel lie, even if it means I have almost no time for gaming in my week.

One day my son comes home and starts telling me about the fun games they played at Mr. Bill’s house. Mr. Bill is his Mom’s beau. Mr. Bill helped my son defeat Bowser and save Princess Peach. My son explained the strange family relationship between Mario and Luigi. I asked if he got to ride Yoshi and he was delighted. He was shocked that I knew who the characters were and what they could do.

It felt nice knowing that he does not associate me in any way with gaming. Don’t get me wrong, I love gaming. I mean, I really love it. In my darkest moments I’ve turned to games to help me pass the time and heal. I play some game an electronic device every single day on. I don’t need to prove my gaming bona fides. I also wonder if gaming has done me more harm than good.

I don’t have an answer, but I do have a problem. I need to be more active. I needed to be more active at a time when half of my friends branched off to junior varsity sports and the other half discovered Sonic and Earthworm Jim. I’m not a gaming addict, it isn’t that sort of problem. I rarely play, and when I do it’s in short bursts. I never gave up relationships or any other opportunity for gaming. Still, that time on the couch wasn’t helping me much, either, if it wasn’t hurting.

I’m keeping my son away from consoles, for the time being. The only digital gaming he’ll do is in the backseat of the car, which is one of the most torturous places on earth for a child and I’m not a monster. In the house, no computer games.

I passed this along to his Mom, too, not in the form of a command but rather by way of saying “here’s what I’m doing and why, maybe you should think about it, too.” I’m not the jealous type. I don’t mind that his Mom’s dude is playing video games with him. I can imagine meeting a girlfriend’s kid for the first time, it would be very comfortable and easy to fall back on video entertainment. It would be fun, and you’d be immediately likeable. I’d probably do it myself.