In the world of earphones, there are some obvious tiers: the bundled earbuds that came with your PMP or cellphone and should probably be dumped straight away; their mainstream replacements; off-the-shelf in-ear monitors (IEMs); and then custom-molded IEMs. There’s also a less publicized hierarchy, of the audio craftsmen behind the IEMs themselves. Ask an audiophile their opinion of Jerry Harvey, and you can probably expect an hour or two of hero-worship; having tested out the new JHAudio JH16 Pro custom IEMs, we now know why. Check out the full review after the cut.

The name Jerry Harvey might not be familiar to most, but the company he founded in 1995, Ultimate Ears, has carved a niche for itself with legendary reputation. Acquired by Logitech in 2008, Ultimate Ears began with Harvey’s quest to make the perfect earphones for Van Halen, replacing the traditional stage monitors with handpicked components (including a speaker intended for pacemakers) slotted inside a custom-molded shell. The IEMs were a hit; orders from pro musicians rolled in, and the company grew from there. 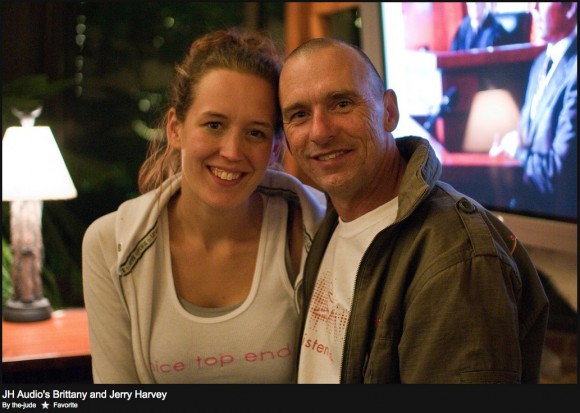 Along the way, the range expanded to cover non-custom earphones all the way up to the high-end IEMs Ultimate Ears was famous for. The consumer range runs in parallel with UE’s musician line, classed by the amount of external noise reduction on offer. Meanwhile, Harvey himself stepped back from the business, eventually dropping off the consumer product radar altogether a few years back, and focusing on setting up a new company, JHAudio, that until 2009 concentrated on IEMs for pilots.

Turns out you can’t keep Harvey’s interest in earphones down, and soon JHAudio was pushing out a range of IEMs targeted, not at pilots, but at the reasonably well-heeled audiophile. There are no non-custom models in JHAudio’s line, and as such they kick off at $399 with the JH5 Pro. At the other end of the scale, meanwhile, are the JHAudio JH16 Pro IEMs, $1,149 of custom earphone and the subject of this review.

If it seems strange to lead into a review with the back-story, consider the heritage. Dropping over a grand on anything requires some faith, especially when you can’t try it out beforehand, and so Harvey’s track record in the audio industry counts for a lot.

As with any custom earphones, your journey starts with some mild discomfort. Having ear impressions taken is never pleasant, but it’s a reasonably quick process (involving fast-setting gunk being injected into your ear canal, to get a cast of its exact contours). That goes off to JHAudio to form the basis of a pair of unique IEM shells, and we were particularly impressed with the turnaround time – around five days (including a weekend) between the company receiving our impressions and the JH16 Pro IEMs being out for delivery.

They arrived in a waterproof Otterbox case, complete with a personalized nameplate, together with a soft carrying pouch and a wax-removal tool (basically a stick with a wire loop on the end). JHAudio offer a choice of 53 different shell color options (in both translucent and solid finishes) together with optional custom artwork if you send them a high-resolution image; you can see the SlashGear roundel on each side of our review set. The headphone cables – available in either clear (so you can see the silver wire inside) or black – are detachable, and JHAudio sell 18-, 48- and 64-inch replacements. 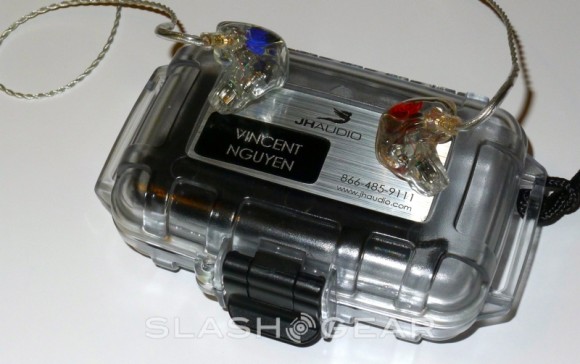 We’ve no issues with the fit, either: slot the extended canal tube into the ear, roll the earpiece back and then pushing the top edge under the helix locks it into place. It’s a comfortable, tight fit, and required no adjustment. The noise reduction – a quoted -26dB – was instantly noticeable and significant; they certainly knock out more environmental sound than Sleek Audio’s CT6 customs (which admittedly are less than half the price of the JH16 Pros). It’s a very isolating experience, and means you can turn down the volume of whatever source you’re using and still pick out all the details; that’s better for your ears and better for the battery on your PMP.

A slick casing is pointless without the components inside to back it up, mind, and the JH16 Pro IEMs certainly deliver on paper. The 16 refer to the total number of drivers: dual high, dual mid and double dual bass, amounting to eight per shell. The company quotes a frequency response range of 10Hz to 20kHz, along with 18 Ohms impedance. Rather than a single bore there are three individual tubes running to the high, mid and bass drivers, intended to reduce any phasing between the different frequencies. Finally there’s an integrated 3-way crossover.

The old adage “garbage in, garbage out” is particularly true here: if you try to make do with the 128kbps MP3s you downloaded from Napster five years ago, you’ll be sorely disappointed. We fed the JH16Pros with lossless audio files instead, though it’s worth noting that you’ll get an even better result if you use a proper headphone amp in-between your PMP and the IEMs.

Even without such an amp, the quality is immense. Where Sleek Audio take your own custom sound balance preferences and hard-code that into the CT6’s, the JH16 Pro IEMs are more even in their profile. It’s transparencies that lend itself to every musical style; the bass, mids and treble are all separated out across the soundstage and clearly differentiated, relying on the original recording for their levels rather than artificial EQing.

Bass bypasses the blurred, overwhelming thump of less capable earphones and instead is kept delineated and precise. In jazz and country that means each slap, rasp and kick is crisp and clear, but the IEMs are equally at home with the fast-moving baselines of dance and rap. The heavily quantized beats of electronic music, meanwhile, are robust and rapid, but the JH16 Pros never feel like they’re tripping up or suffering from the pace. If you’re a bass addict you might be tempted to reach for the equalizer to tweak up the lower frequencies, but holding off reveals a more textured, layered soundscape.

Mid frequencies can often be the dull filling in the sandwich, with earphone manufacturers relying on a heavy bottom end and sparkling trebles to bracket an underwhelming middle section. Happily JHAudio shows no such laziness, particularly noticeable during vocal recordings. Here, there’s a definite precision, with little of the gumming that cheaper earphones can produce when the mids blend with the high and low ends. In return, the 3-way crossover shifts some of the low-mid percussion into the higher end of the bass driver, leading to a generally warmer sound with a little more reverb.

Over-tuning the treble end of a set of headphones is an easy short-term way to make them seem lively and bright, but it’s tiring over extended periods. The JH16 Pros take the preferable approach of a more natural top end, full of shimmer but enough control to avoid sibilance or hiss. Strings arch and echo beautifully, while the glitchy, squelchy stabs of electronic music crackle with tightly controlled venom. Brass, meanwhile, is bright and sharp without being shrill.

Each section is pure and open in its own fashion, but together there’s an immersive quality akin to sitting among the musicians rather than in front of them. Music has more energy, the minute details of high-resolution recordings offering previously unheard detail: the subtler baselines, the breath of vocalists. Live recordings are even more enlightening, the movement of musicians and their collective energy coming through in the immediacy of the JH16 Pros’ reproduction.

It’s tough to do audio justice when all you have are words; harder still when, as with the JH16 Pro, the custom nature means you can’t pass them round to get a group opinion. You might expect the level of transparency on offer to leave recordings feeling cold, lacking in some energy, and yet there’s just enough color for them to avoid feeling sterile – tuned for scientific track balancing rather than musical enjoyment – like pure studio monitors.

Best of all is that their tonality evolves and matures over time, as the IEMs go through their burn-in process. With that, we’ve found, our enjoyment of various musical styles has developed, and the elements that we pick out and remember grow more complex.

Are they perfect? Not quite; the harder plastic hoops that shield the headphone cable as it exits each earphone can be tricky to place if you’re wearing glasses or sunglasses; moreover their scraping on those glasses is transmitted directly into your ear. The clear cable is also prone to discoloration from the body’s natural oils – something JHAudio do warn can happen in their FAQ – turning green in the process. No audible impact, of course, but aesthetically less than pleasing.

Still, they’re minor issues in a set of IEMs that are otherwise hard to critique, certainly in pure audio terms. The biggest hurdles are price and, ironically, audience. The former is obvious: $1,149 is a huge amount to spend on a set of earphones, more than most would consider laying down on a PMP or even a home speaker system. The latter is trickier, as it’s about the quality of the audio files you want to listen to. If your digital music collection is a hash of different bitrates and hefty compression, you’ll want to revisit – and re-rip – the originals in order to make the IEMs worthwhile. Take that time, and justify that expense, and it’s hard to imagine the JHAudio JH16 Pro IEMs any but totally amazing. [JHAudio homepage] 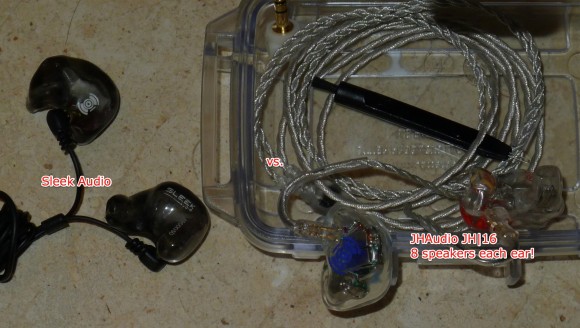