A few years ago, almost every market analyst and tech news site repeated the mantra of the death of tablets that no longer have any place in a consumer market filled with large phones. Today, tablets have apparently become one of the strongest contenders in the global PC market, helping continue that market’s growth after languishing for years. Of course, the pandemic is partly to thank for that but a bit more interesting is how Apple’s tablets have played an important role there as well.

Although it will probably contest the association, Apple’s Macs have always been lumped together with other PCs when it comes to surveying sales and market growth. The interesting trend in the past quarters, however, is that tablets have slowly become part of that group as well, including Apple’s iPads and Samsung’s Android tablets. That is pretty much a vindication of Apple’s push to portray its iPads, especially the iPad Pros, as the next generation of computers rather than the mere consumption devices they were in the past.

The tablet market experienced a 54% growth in Q4 of 2020 compared to the same period the previous year and a 28% growth when comparing totals between 2019 and 2020. Apple is, unsurprisingly at the top of it all, with nearly 40% of the pie. Samsung is a distant second, almost making it to 20%, followed by Amazon whose sales experienced a holiday boost in the fourth quarter of last year.

Even more impressive, however, is the growth spurt of Chromebooks that experience a 287% increase in shipments when comparing the last quarter of 2020 and 2019. While Lenovo still leads the overall global PC market, HP is rated as the top Chromebook maker for 2020. 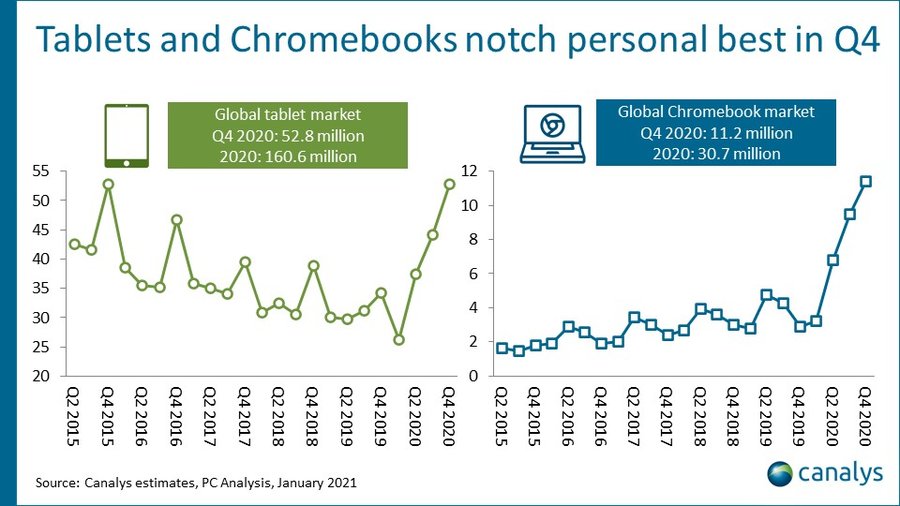 Canalys explains the surge of Chromebooks and the resurgence of tablets as a change in market trends brought about by a change in lifestyles, work, and education last year. There has been a growing need for more accessible computing devices that tablets deliver as well as more economical educational computers like Chromebooks. The market analyst doesn’t expect this trend to change anytime soon and might, in fact, see even more detachable tablets launched, including Microsoft’s Windows 10X Chrome OS rival.