The next-generation iPad has just landed and is available for pre-order. It’s a decent device to start with. Not a major overhaul on the exterior, so the look and feel is pretty similar to the previous year’s device. But the brand new ninth-generation iPad packs the firepower to deem the already popular iPad a compelling upgrade.

The eighth-generation iPad was, if you have used, a very reliable tablet for multitasking, thanks to the updated processor from yesteryears. The iPad delivered a capable nine odd hours of battery backup and was a hit with people working or learning from home.

We are still in the pandemic; working and learning from home is expected to continue as a norm for an indefinite future. In such a setting, an iPad with a faster processor, a day’s battery backup and considerable optical enhancement would definitely make a tablet you’d want. With a powerful A13 Bionic powering the guts, a camera setup with Center Stage better managing the FaceTime calls, and twice the storage from the predecessor handling downloads with more finesse; the new iPad is everything you’d want for an unchanged cost (it’s still priced equal to the previous generation iPad). 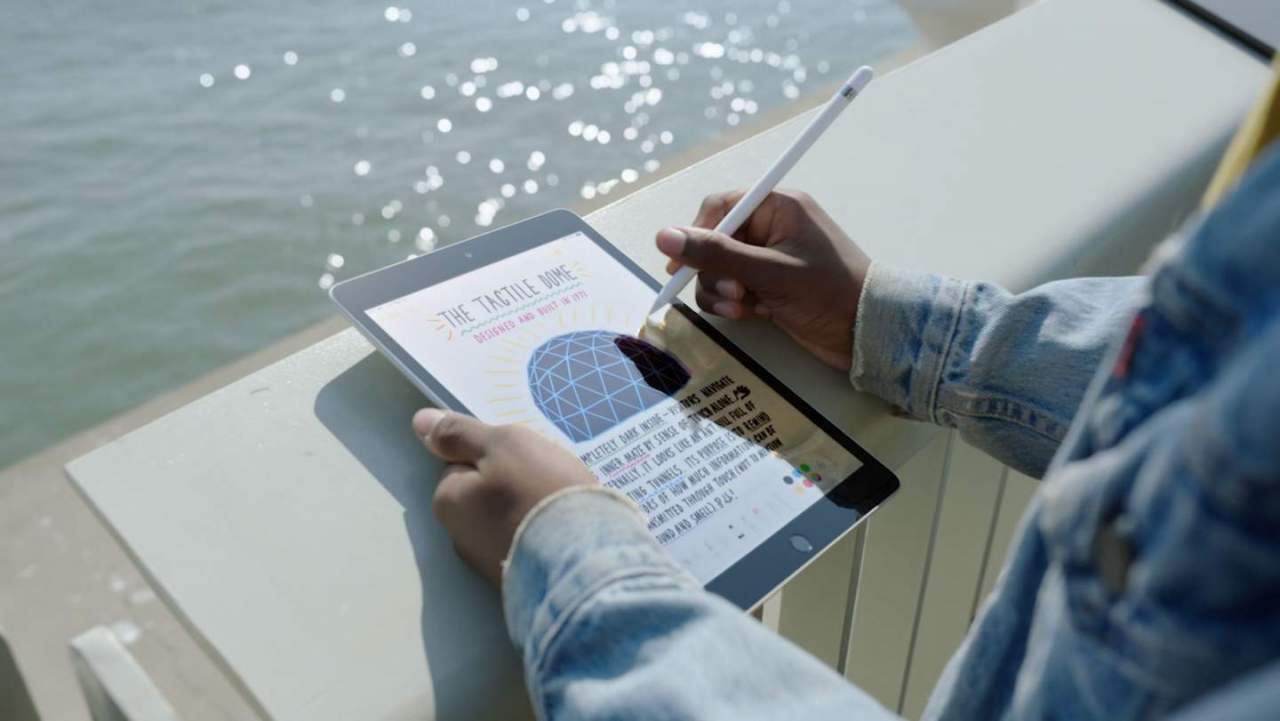 On the outside, the latest $329 iPad is almost identical to the iPad 8-gen. But it is packed to deliver better performance and touts advanced features, which start right at the display. It remains consistent at a 10.2-inch Retina display – already compelling to watch movies, play games and work on business plans – but with the inclusion of True Tone display that automatically tunes the screen to color temperature of the room, we are talking about features that some premium segment iPads and MacBooks boast.

Since the layout of the new iPad remains identical to the older version, it maintains slightly thick bezels on all sides of the display. We would have liked to see the bezel become smaller but that hasn’t happened. We should therefore take heart in the fact that the bezel makes room for the iconic Touch ID in the Home Button (which is interesting until Apple can work out a functional design of an under-display fingerprint sensor).

The brighter and more intelligent display of the iPad now rests within an enclosure comprising 100-percent recycled aluminum. The 2021 model will arrive in silver and space gray color options. Considering the design remains almost unaltered from the previous year’s iPad, the new option is compatible with existing accessories and Smart Keyboard. 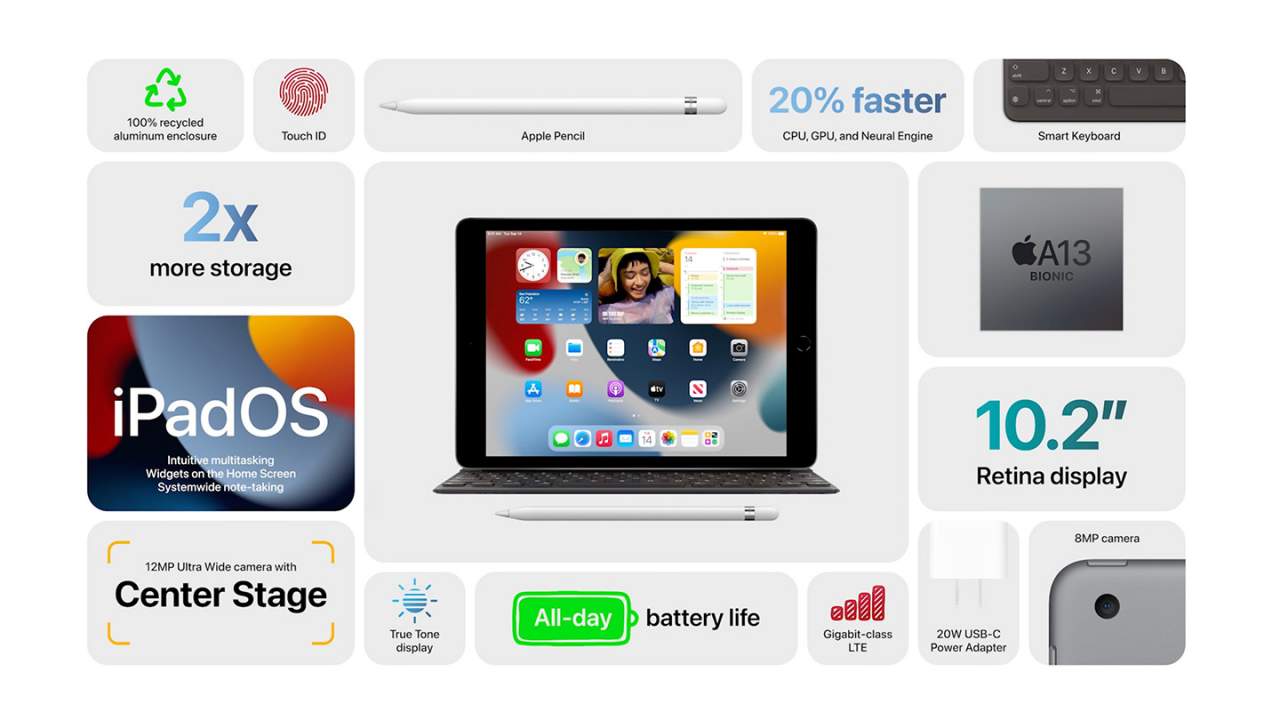 The iPad is an entry-level device in Apple’s diverse lineup, so, expecting too much from it in terms of power and performance is unseemly. The 8-gen iPad with A12 Bionic was still an elusive device for web browsing, using multiple apps at once, and doing much more. The capability has now been increased manifold with the introduction of A13 Bionic chip within the new iPad that should make everything all the more responsive.

According to Apple, the new chip should deliver up to a 20-percent better performance in comparison with the previous year’s model. This additional capability shall provide enhanced graphic performance for playing games and multitasking. The Neural Engine onboard A13 chipset should also allow you to seamlessly run advanced apps on the iPad and propel its machine learning capabilities to the next level along with the help of iPadOS 15, which is powerful and seamless to use.

Just like with the iPhone 13, where Apple has doubled the storage capacity; it has also doubled the storage space on the new iPad, without adding the burden in form of the additional cost. Twice the storage from previous generation iPad at the same cost will relieve people from any issues they had with onboard storage of their device. 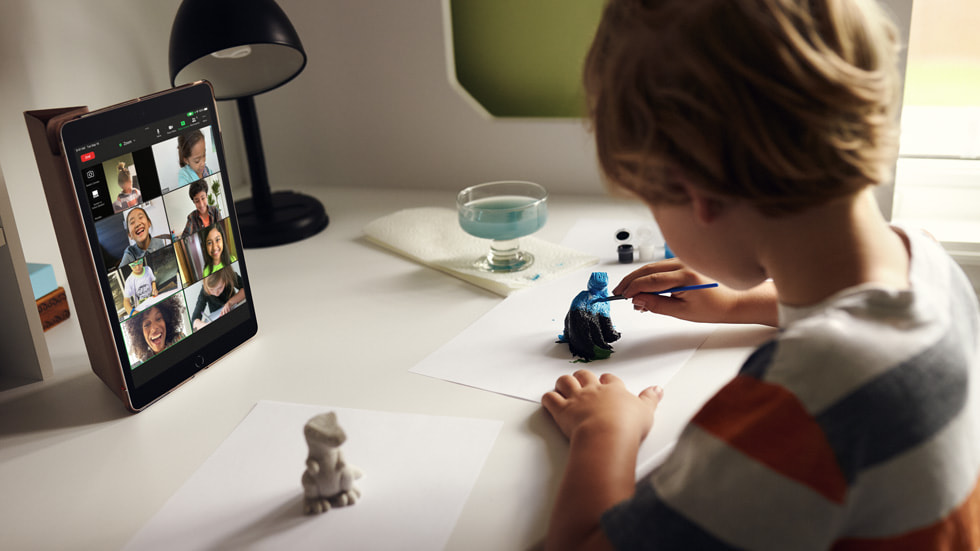 At the outset be clear, the new iPad is not reinventing the wheel here. No dual cameras on the back or any design alteration is the lens. The iPad has only an 8MP wide camera lens in the rear, which does vouch for sharper and more vivid images and videos. The 8MP camera is also versatile enough to scan documents and allow users to experience immersive augmented reality apps. Club that with the iPad’s 12MP ultra-wide lens on the front and the new tablet is instantly amid the best on the market for video calls and online classes.

The front camera does come with certain notable specs to make it even more exciting in comparison to the predecessor. The 12MP camera arrives with Center Stage, the feature from the mighty iPad Pro, which ensures the tablet keeps you in the center of the frame while you move about during a FaceTime call or a Facebook live session. The iPad has some other exciting skills to make it useful for everyone; for instance, it comes with accessibility features that detect participants using sign language to communicate and instantly makes the person prominent on the group call. 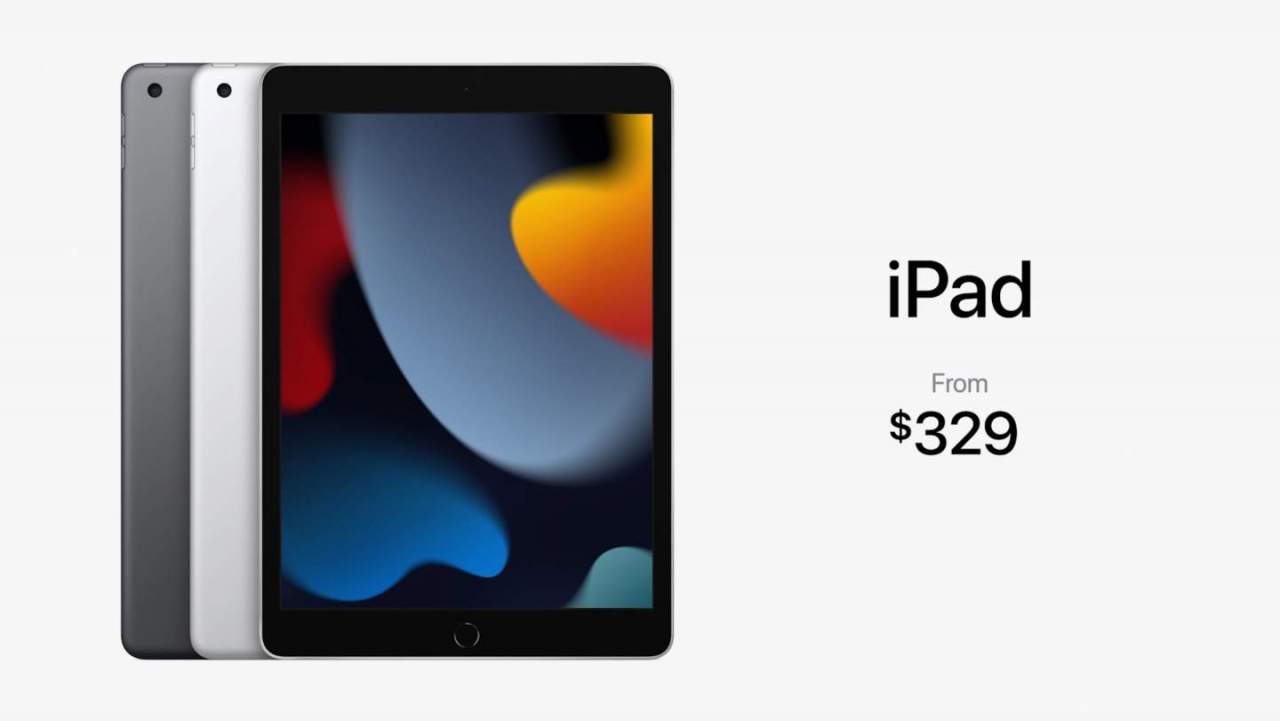 Whether you own the 8-gen iPad or one from the years before that, the iPad 2021 with an upgraded display, more camera prowess and a more powerful and efficient processor is definitely worth switching to. What should have you intrigued is the price, the new iPad despite all the above-mentioned features and twice the storage, still comes for the same starting price. So, the new iPad makes a good entry point into the world of capable tablets for video conferencing, multitasking and a hybrid work environment.