Today, Iowa announced that digital ID “cards” would be officially allowed for use. An “official” app housing your driver’s license is being released by the Department of Transportation in Iowa, and protected with a PIN. The move is lauded by many as our first official move into a digital realm, where we can finally shed ourselves of those pesky wallets we’ve dreaded for decades. Digital ID cards are fun, but major glaring issues persist. When you weigh the benefits against the potential problems, digital isn’t (yet) all it’s cracked up to be.

The concept is pretty simple: leave home, grab phone, and everything else is left behind. It sounds so perfect, and in some cases, might be. The move would let you flash your phone at an officer when pulled over, proving you’re you and licensed to drive, but then what?

Iowa’s digital ID card brings up a myriad of questions. Police officers don’t glance at cards, they take them back to their cruiser. So, in the process of writing your ticket, what if the Officer is given probable cause to search your phone because a text message popped up, or your new app pushed a notification that concerned the officer? 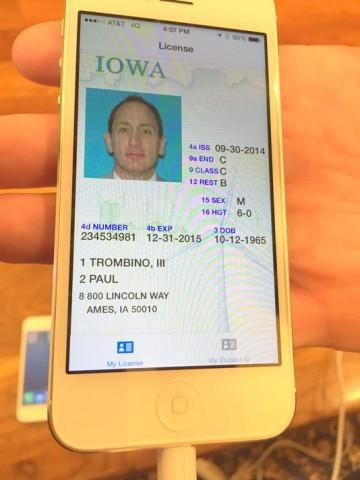 The app itself is PIN-locked, but that doesn’t help the rest of your content. There is also precedent for law enforcement officials to force you to unlock your phone, but simply backing out of your official license app and searching your phone for content wouldn’t help you then.

There are other situations you’d need a license, like going to a bar, but it’s highly unlikely a bar would accept your digital self. An app is easy enough to spoof, and digital ID cards can be mimicked easily. Fake app, fake ID, but real consequences for a bar that served an underage person.

Digital is great, but it’s not a place we’re wholly ready to be yet. I enjoy paying for things digitally, but my license makes a home next to that other thing we still can’t get away from: cash.