Internet Explorer 10 is said to have JavaScript rendering that is four times as fast as the current IE. Not only that, but there will be twice as many HTML5 features in Internet Explorer 10. The anti-phishing feature, dubbed SmartScreen, takes data collected from hundreds of millions of Windows PCs and applies that to the mobile browser, blocking malicious websites in real time. A demo that highlighted the feature showed a red pop-up appearing when the browser detects a potentially malicious website, warning users that the “website has been reported as unsafe.” 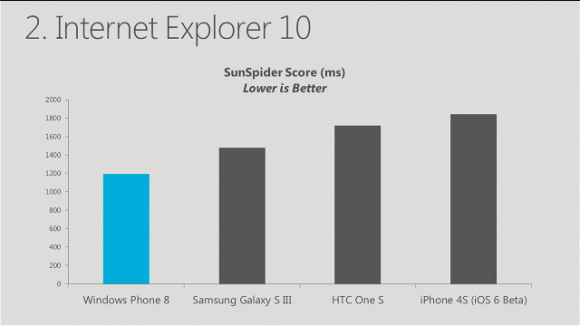 Microsoft is so confident of Internet Explorer 10’s performance that they shared a slide comparing the SunSpider benchmark score against phones such as the Galaxy S III, HTC One S, and iPhone 4S running the iOS 6 beta. As you can see, Internet Explorer 10 looks to have beaten out dual-core and quad-core powerhouses from competitors, but Microsoft failed to mention what kind of hardware the test was performed on. Showing off the hardware accelerated HTML5 on-stage, a “fountain of apps” demo showed how smooth and fluid the browser was even when presented with complicated animations and graphics.