During the IDF conference in Beijing, Intel let loose on its checklist of spec requirements for upcoming Windows 8 tablets. The company plans to initially support two basic tablet form factors, one being a 10-inch slab, while the other an 11-inch hybrid with a physical keyboard in tow. The tablets will be running on Intel’s Clover Trail Atom Z2760 chips.

Intel has been showing off a prototype Windows 8 tablet since CES earlier this year that’s been using the Atom Z2760 chip, which is built on a 32nm process. The chip is described as being dual-core-capable and supports burst mode and hyperthreading that allow for performance boosts when needed.

The two form factors of 10-inch and 11-inch tablets must weigh at most 1.5 pounds and be 9mm thin. Battery life must be at least 9 hours and be capable of surviving 30 days in standby mode. Connectivity options include WiFi Direct, 3G or 4G, as well as NFC.

Other requirements for Windows 8 tablets not mentioned by Intel but announced previously by Microsoft, include five physical buttons: power, volume up, volume down, rotation lock, and the Windows key. Also, the tablet’s display must be at the minimum 1366 x 768 pixel resolution with a depth of 32bits, while the camera must be capable of at least 720p. WLAN, Bluetooth 4.0 + LE, GPS, and various sensors are also required. 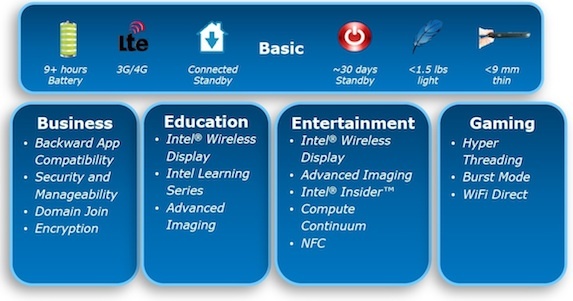