The Meltdown and Spectre vulnerabilities that were discovered last week are very bad news, and though Intel has been quick to roll out patches for them, the measures it had to take aren’t exactly ideal. Specifically, these patches come with a performance hit for Intel systems, and in the lead up to their delivery, some benchmarks showed that the potential slowdown could be as high as 30%. While Meltdown and Spectre are issues that absolutely need to be defended against, the looming slowdown that accompanied these patches was still a bitter pill for Intel users to swallow.

Today Intel is sharing some initial benchmarks that show how these patches are affecting performance in PCs using the company’s CPUs. The results are equal parts good and bad, and how much slowdown you’ll experience largely depends on how old your processor is and just what you’re looking to do with your computer.

In a statement today, Intel chief Brian Krzanich says that the company is learning a lot as these software and firmware patches are rolled out. “We know that impact on performance varies widely, based on the specific workload, platform configuration and mitigation technique,” he said. “We commit to provide frequent progress reports of patch progress, performance data and other information.”

The first of those progress reports was released today. In a blog post to the Intel Newsroom, VP and general manager of Intel’s Data Center Group Navin Shenoy shared benchmarks for Coffee Lake, Kaby Lake, and Skylake Core i7 processors running both Windows 10 and Windows 7 with SSD storage. The good news is that for things like business use and gaming, the performance hits are fairly small, with all CPUs operating at 90% relative performance or higher for tasks like media creation, data analysis, and office productivity.

Since DX 11 gaming is so reliant on graphics power instead of the CPU, we don’t see any real hit to performance there either. Relative performance was at (and sometimes above) 100% for many configurations, dipping down only a percentage point or two in some instances. In short: You likely won’t notice any real performance hit when you’re playing games, which is reassuring considering the lengths some PC gamers will go to in order to build a top-of-the-line rig. 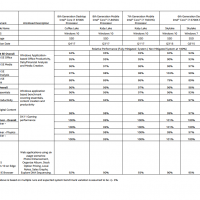 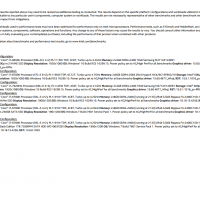 The bad news comes when we look at Intel’s SYSMark 2014 SE scores for responsiveness. This includes tasks like multi-tab browsing, launching applications, background installs, and multi-tasking. In that test, every processor but one took more than a 10% hit to relative performance, with the sole exception of an Intel Core i7-6700K running Windows 7 with an HDD, which saw performance slightly improve after the patch was applied.

For everything else, though, we’re looking at a considerable hit to responsiveness. If you have the misfortune of using a i7-6700K – a processor that’s less than 3 years old – with Windows 10 and an SSD, you’re looking at a relative performance hit of 21%. Since all of us use our computers for those tasks listed above, we’re all likely going to experience slowdown to some degree, in some cases significantly so.

Of course, the alternative is leaving your PC unpatched against Spectre and Meltdown, which definitely isn’t a viable solution. In many cases, overall relative performance for each CPU is still pretty high, which is good news indeed, but it isn’t a bad idea to brace for slowdown in some form. You can take at look at Intel’s benchmarks, and thereby get the completely picture, by clicking on the thumbnails you see above.