VR-supported and 360-degree videos are starting to become more common, but your everyday user doesn’t always want — or have access to — a big fancy camera rig to capture such footage while one the go. The Insta360 Nano aims to address this need with a pocket-size camera that brings 360-degree video recording to the iPhone.

The device works by pairing front-facing and rear-facing 210-degree fish-eye cameras, and connecting to the Lightning port on the bottom of an iPhone. This means the Insta360 Nano is an actual camera that attaches to the iPhone, and not a simple lens cover for the phone’s built-in cameras. It also means the iPhone is held upside down while in use, but that doesn’t really matter.

The camera stitches together all its panoramic images in real-time, so there’s no need for post-production on a PC or with other software, allowing videos to be shared immediately. The Insta360 Nano can capture at 30fps with a max resolution of 3K.

Once the camera is paired with an accompanying app (which thankfully is automatically rotated, so it appears right-side up), users can quickly and easily share images to social networks like Facebook and Twitter, and even live broadcast their 360-degree footage.

Below is a sample video from the Insta360 Nano, which can be watched in 360-degree with compatible browsers and devices.

Priced at $199, the Insta360 Nano comes in five colors (silver, gray, black, gold, and pink), so it will match any shade of iPhone. It starts shipping on July 15th, and can be pre-ordered from Amazon now. 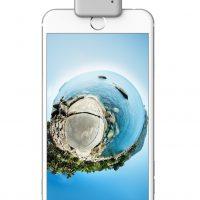 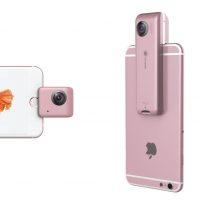 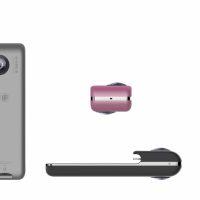