Here’s an interesting statistic you may not have seen coming: Windows Phone is expected to double their global market share over the next three years or so, according to IDC. In their most recent forecast, the analytics firm is noting Windows will become a more prominent player in the global smartphone market, while incumbents hold fast. IDC also cites the proliferation of lower priced phones with higher end specs as those to look for on the world stage, as emerging markets become important.

Revenues from smartphones will also take a hit, as those OnePlus Ones and Xiaomi Mis of the world challenge the status quo. According to IDC, a CAGR of 4.2% can be expected for revenues between the 2014-2018 period.

Still, Android will reign supreme, though IDC isn’t convinced in the method for doing so. If IDC is correct, the emerging market will be a bit of history rhyming:

Meanwhile, Android’s multi-faceted approach – with forked versions and low-cost Android One strategy – will produce mixed results, yet it allows deeper penetration into emerging markets. That can lead to additional pressure on its vendor partners, who will need to seek greater differentiation in terms of devices and experiences in the hyper-competitive smartphone market.

IDC also thinks Apple is smart with their bottom line, saying “Apple’s approach with premium pricing ensures a growing portion of overall revenues despite its declining market share”, even though the shirt toward value looms large. 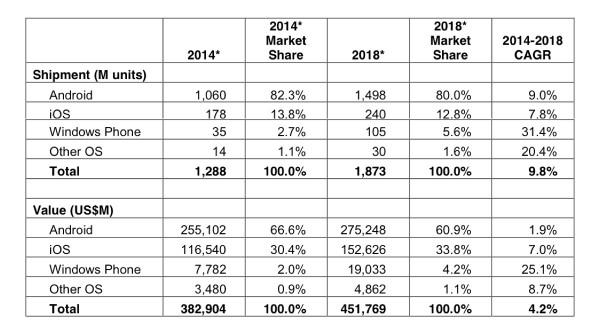 By 2018, Android will still reign supreme, holding court with 80% of the worldwide market. Apple will have roughly 12.8%, both ceding ground to Windows, where Microsoft is expected to make a jump from 2.7% to 5.6% market share globally. Though they don’t say as much, perhaps IDC is as excited by Windows 10 as the rest of us.