The SETI Institute and Astrobotic Technology, Inc have announced that they have finished using a drone equipped with a LiDAR system to explore the interior of a lava tube in Iceland. The ice-rich lava tube is located in the remote Myvantn region of Iceland. The LiDAR packing drone was able to document the shape and extent, history of rock falls, and ice formations inside the tube.

The team says that the research helps it to prepare for the similar exploration of underground structures on Mars and the moon. Researchers wanted to learn the potential hazards and opportunities presented by lava caves on the moon and Mars that they want to explore in future missions.

Ice contained inside the caves could be used for drinking and could be broken down into hydrogen and oxygen to produce rocket fuel. On the moon, these cave openings form either in volcanic terrain, or terrain that once melted as the result of extreme heating from an asteroid or a comet impact according to SETI. 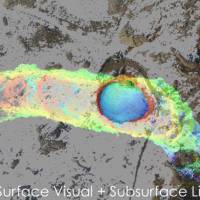 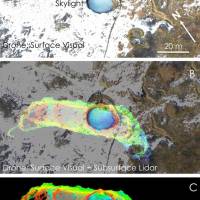 NASA contracted Astrobotic to develop custom navigation software called AstroNav that allows drones and small free-flying spacecraft to explore and map the subterranean environment autonomously. The system uses LiDAR and stereo vision to navigate without GPS, and it can operate in total darkness.