I drove Audi’s car that talks to traffic lights

Imagine how much better your life would be if you were less preoccupied with traffic lights. If your car was connected to the the city’s traffic network of lights, and could let you know precisely how long before the light you’re approaching turns green. Or if, should you be already waiting at the light, you knew exactly when it was about to turn green: your car’s start/stop engine knowing to start up again when there are 5 seconds left before the light changes, while you know if it’s worth pulling your phone out of your pocket to check Twitter or iMessage. Imagine the number of minutes you’d gain back per day, week, month and even year?

I know that if my car offered such a feature, my quality of life would most definitely increase and my stress levels drop way down. Ever get stuck behind a person texting or chatting on the phone, and who then doesn’t even notice the light has turned green? We all have. In fact, while I was out testing Audi‘s new Traffic Light Online system on a demo drive in the streets of Berlin, this very scenario happened to me.

For the driver, the connected traffic lights communicate with a simple countdown display on the dashboard. A graphical representation of the light itself in the driver display, and a simple number which shows how long you’ve got left until the light goes green.

In Berlin, for instance, there are around 700 connected lights out of a total of 2,500. The timing data gets fed back to Audi’s backend system, and then as each car approaches a junction it requests the latest prediction data. In theory, by knowing the status of the light ahead – whether it’s likely to stay green, to change soon, or be stuck on red for a while – the driver will be able to decide what speed is appropriate. 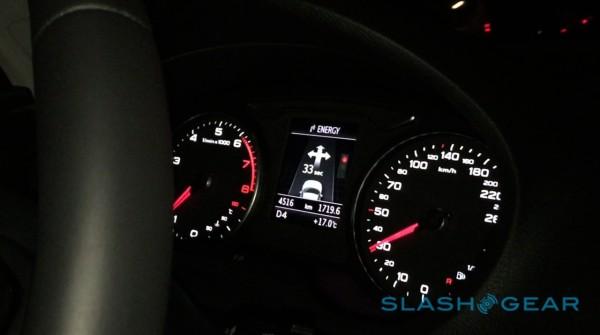 Not every junction is created equal, of course, but the connected lights can take that into account, too. If there’s more than one signal, for example, as you flick on your blinkers the system will automatically inform you of the amount of time left before the light turns green for the direction you want to take. It completely takes away the guesswork.

The benefits aren’t just in reducing driver frustration. Sure, if I can gain back roughly the 30-seconds waiting at each traffic light I might be able to safely squeeze in an extra text, tweet, or maybe even have a face-to-face chat with my wife, kids, or whoever else is in the car with me. The bigger benefits, though, are in fuel economy and emissions reduction, not to mention smoother flowing cities. 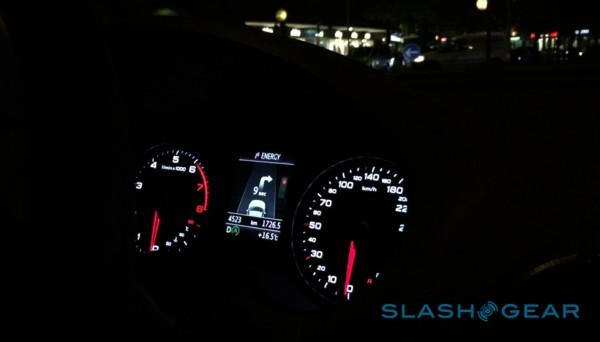 As it stands, Audi explained to me, some drivers choose to override the start/stop system their car comes equipped with, because they don’t like how it will shut off every time they pause, even if it’s just for a moment.

With connected traffic lights, however, the car could auto-stop at the stop light and then turn on within a few seconds just before the light turns green. If there’s not enough time to make shutting the engine down worthwhile, the start/stop system will get a temporary override. Even without it turning on each and every time, the increased use could lead to as much as a 15-percent cut in CO2 emissions if it were enabled in Germany alone, or 238m gallons of fuel.

How else does it help the city as a whole by cutting down on congestion? Simply put, if drivers are less worried about beating the light, traffic flow would be much smoother and, as a result, stop-go traffic jams would be minimized.

For all this to happen, of course, you’d need to opt in and anonymously share telemetry data such as GPS location and speed. With that information, if city officials saw an alert about traffic congestion in a certain location, they’d then have the means to reroute traffic or even alert drivers in advance. 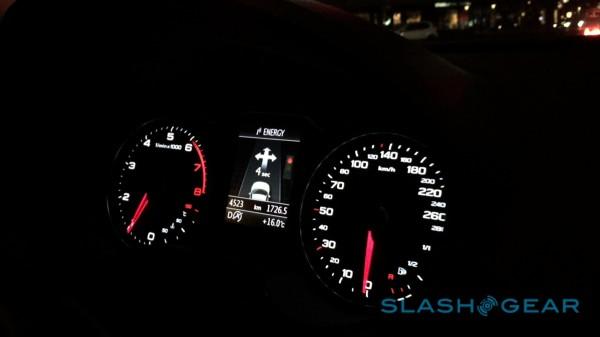 The same data could also provide long term feedback as to which roads are being used the most over time. Knowing, Audi says, is half the battle to reducing traffic jams.

Asking drivers to share data inevitably opens the door to questions around data security and privacy. For Audi’s part, there’s a direct link between each individual car and Audi’s backend, a connection not accessible by anyone else.

Audi showed off an A6 sedan with the technology at CES 2014 back in January, but there are only a few dozen A3 hatchbacks so equipped actually on the road being tested in Berlin right now. Having driven it myself, I can only hope that the “intense analysis” Audi says it’s doing of launch feasibility in the US pans out, and our cars can soon be quietly chatting with the rest of the road.