I Bought A Purse

Why can’t I just wear a purse? I certainly can, there’s nothing illegal or wrong about it. In technology and gadgetry, there’s an assumed scale of masculinity to femininity. I don’t agree with the scale, and I generally try to ignore or actively buck these trends. Still, they exist, and here they are, laid bare.

First, there is the outright masculine end of the scale. Don’t think about male body parts, think Jeeps. Jeeps are very ugly and highly functional. They have little aesthetic decoration, but every detail serves a purpose. There is a teeter-totter of utility on one end and aesthetic on the other. As we give up utility in favor of beauty, our gadgets are widely perceived as more feminine. Add colors design finishes, start removing features and wanton capabilities of questionable benefit and you end up with a feminized device.

[aquote]Mix colors with red, it seems, and you remove their male potency[/aquote]

There is also a question of color, which makes far less sense to me. I’ll never understand how colors became gendered, in the same way I wouldn’t understand gendered flavors or gendered musical notes. Some colors carry an undeniable association with gender, though, even when the color seems completely neutral. Pink is the most obvious gendered color. Purple comes a close second. Mix colors with red, it seems, and you remove their male potency.

Some gendered colors surprise me. I remember the first product I purchased that carried a gender stigma of which I was unaware: the white iPhone 3G. I loved that device in that color. Black seemed too industrial. Black was too normal, like so many other smartphones on the market. It was uninviting and, frankly, for my tastes, too masculine. So, I shouldn’t have been surprised or embarrassed when I showed off my brand new iToy and was greeted with some harmless ribbing by my male colleagues. Even some women I showed it to, including my now-ex-wife, thought it was a bit too feminine, even for their own tastes. Personally, I just liked it better. When it comes to deciding which color gadget to buy, I make an entirely emotional decision. Whichever color appeals to me most at the moment I make the purchase is the one I take home.

I believe in the legitimacy of this emotional response to our gadgets, and that’s certainly what I was feeling when I decided to buy my new tablet a purse … I mean, a carrying case. I scoped out my favorite bag makers and decided on either a Tom Bihn Ristretto or a Waterfield Ultimate SleeveCase. Both seemed a little effeminate for my needs, but both were exactly what I wanted.

Here’s my full disclosure. Usually here’s where I mention day job is with Samsung blah blah blah. Today, though, I’m disclosing that my father used to carry a purse. A satchel. A man’s carry-all bag, in the European style. He had many of these, leather and canvas. His use of the purse predated tablets or even smartphones, so there was no form-fitted purpose to his carrying a purse. It simply made sense as a way to store his wallet, keys, StarTAC, and a few papers or receipts or whatnot. He gave it up a few years ago, and I have little doubt he was simply tired of the comments. He was tired of being labeled the guy with the purse. He still has the bags, stuffed away somewhere, holding onto receipts that predate Check Cards and email.

Why can’t I just carry a purse? Actually, I can. There’s nothing really stopping me except the ideas in my own head. I can ignore looks and comments from people around me and simply do what I like. It’s just that easy. Right? Unfortunately, no. We’re humans, and humans are coded to work better in groups. We hardwired to be acutely aware of those around us and how they are responding to us. We’re supposed to change and conform. We feel awkward. We stick out. In prehistoric cave times, this instinct keeps you from being culled from the herd by a hungry tiger. Today, it makes me feel awkward about carrying a purse.

It’s especially weird that I should feel awkward about this because I already own plenty of pink. I have pink iPods. I have pink phone cases (that I use with my big white smartphone). I have shirts and gadgets and decorations at home that veer into the feminine end of the color spectrum, though I wouldn’t say they are especially feminine in design, if there is such a thing. 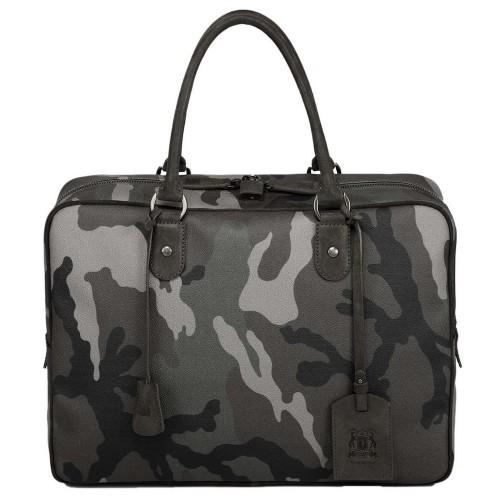 There is also a strange divide between fashion and utility when it comes to bags. I may feel like my Ultimate Sleeve Case looks too feminine wearing it about, but it’s nothing compared to a Coach bag or a fancy Italian designer case. When a bag literally borrows materials and design accents from a famous women’s clothing house, it falls deeper into feminine territory.

At once, my free-thinking and liberal mind is watching all of the sinkholes open in my argument. The secularization of men’s and women’s clothing is problematic. My definitions of masculine and feminine in design, with utility on the masculine end and aesthetic on the feminine, is reductive and perhaps dangerous. It results in pink versions of under-specced phones with dangly accessories tacked onto them. There are problems with my color assignments, especially as color and design preferences vary greatly by culture.

I know it. I see the pitfalls. I understand this is an argument about which I’m hardly qualified to rave from a distressed male perspective. But the bottom line is that I just want to carry a nice purse. I love my tablet, I want to pare down so I can just carry my tablet and some essentials, and I want to sling that all over my shoulder. To meet my needs, I’ll buy whatever I need. I’ll just buy it in black, with some distressed hide leather. And I’ll get a really ugly, utilitarian strap.