If you’re a Garmin customer, you may have found yourself unable to access the company’s mobile apps, smartwatch syncing features, or even to get ahold of customer support through the company’s call center. This is due to a major ongoing outage, the company has revealed, one that has been taking place for the majority of Thursday. It’s unclear when the services will be back online and it has been several hours since the company’s last status update.

At around 8:30AM ET, Garmin published a tweet acknowledging that it is experiencing a widespread services outage that impacts its Garmin Connect and, therefore, its website, mobile apps, and all of its various services. As well, customers aren’t able to get through the Garmin call centers and the company’s teams can’t access chats, calls, or emails. 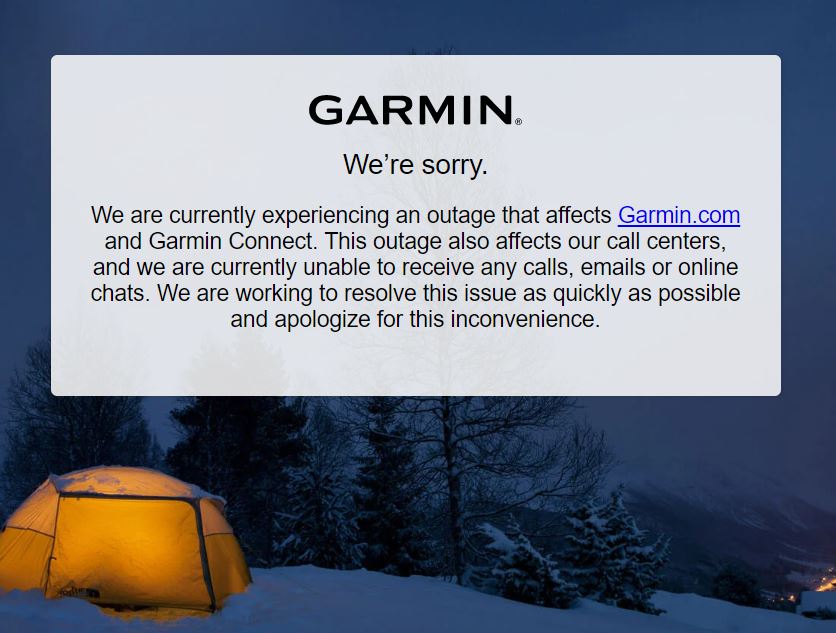 As of 5PM ET, Garmin has not offered an update on the matter, which is still taking place. A look at the Garmin Connect services status page shows that 100% of the company’s services are ‘down,’ including things like MyFitnessPal, Strava, Challenges, Leaderboards, Courses, and everything else its customers utilize.

Because the cloud service is down, the mobile apps can’t be used to sync wearables with the user’s phone — in fact, the wearables are currently, for all intents and purposes, unusable. Garmin hasn’t yet offered an explanation about what went wrong, but the company’s silence combined with the long outage and its severity has spurred speculation that the company may have experienced some sort of cybersecurity incident.

Customers are understandably getting upset over the company’s complete lack of updates since its initial announcement. It’s unclear how long this outage may last, but given the long duration we’ve already seen pass, it may end up being a longer issue than users had initially anticipated.