As 2019 came to a close, we saw a number of leaks and reports concerning the upcoming Huawei P40 and its beefed up brother, the P40 Pro. One leaked render showed off the P40 Pro with a quad-rear camera, but if that’s a bit too serious for you, then you might find the sight of the standard P40 refreshing. We’re seeing the P40 from most angles in a leaked render today, giving us a good idea of what to expect from the phone.

The leaked render comes from the folks at 91Mobiles, which obtained it from “industry sources.” What 91Mobiles shared today is actually four renders combined into one image, showing off the phone’s front, back, right side, and bottom. 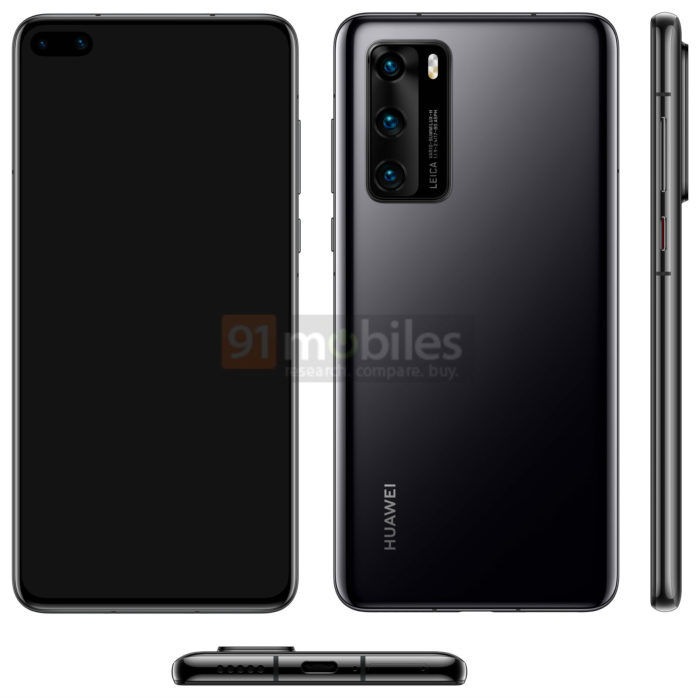 In it, we see that the standard P40 will have a Leica-branded triple camera array on the back, sporting one less camera than the P40 Pro. On the front, we see a cutout for the front-facing cameras instead of notch, with two lenses visible in the render. So, between the front and the back, there are still quite a few cameras on this bad boy, just not quite as many as the P40 Pro.

The right-side and bottom views don’t really have much to show, but they do give us an idea of how big the P40’s camera bump is. As 91Mobiles notes, the camera array on the back is rumored to be comprised of a primary sensor, ultra-wide sensor, and time-of-flight sensor, though more precise specifications aren’t available at the moment. The phone is also expected to ship with a Kirin 990 CPU that supports 5G.

So, we don’t know a whole lot about the P40 or the P40 Pro just yet. Huawei is expected to reveal these phones in March, and we’re guessing we’ll see more leaks in the time between now and then. We’ll keep an eye out for more on these phones, so stay tuned.