HTC U11 Plus headed for reveal at November event

For the most part, autumn’s big reveals and releases are over. We’ve already attended events for the Galaxy Note 8, iPhone 8 and iPhone X, and the Google Pixel 2, but before we put the autumn reveals season to bed, HTC is arriving with a late entry. Today the company began sending out invitations to an event happening in Taipei next month.

Chinese site ITHome shares the invitation in a post today. While the invitation understandably isn’t very direct with what HTC plans to unveil, it isn’t hard to imagine what will be on display. The rumored HTC U11 Plus is likely on tap for a reveal, and sure enough, a big “U” adorns the invitation, making an appearance from the U11 Plus even more likely.

For those who aren’t up to speed with the U11 Plus rumors, you should know that we largely expect the same phone as the standard U11. Internal components won’t be changing in any significant way, with HTC choosing to focus on the display with this next release. According to reports, the U11 Plus will serve as HTC’s foray into the realm of bezel-less displays. 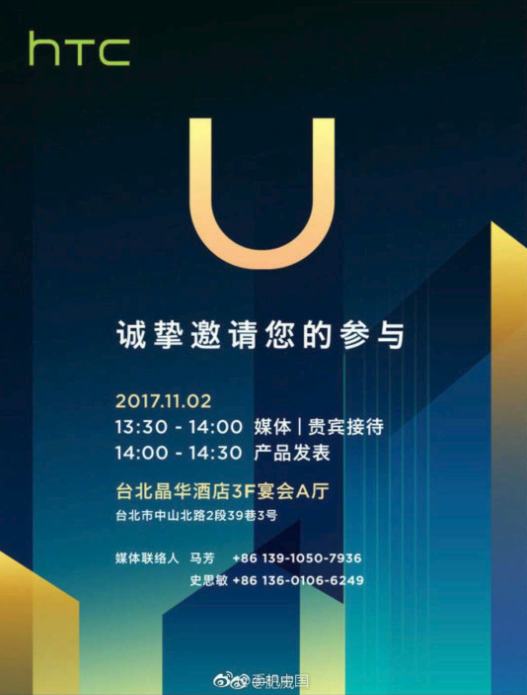 The HTC U11 Plus is said to have a 5.99-inch borderless LCD display. It’ll boast a resolution of 2880×1440, giving it a wide aspect ratio of 18:9. There hasn’t been any word yet on whether or not Edge Sense gestures will be returning for this late 2017 flagship, but considering they were such a huge part of the original HTC U11, we wouldn’t be surprised to see them again.

On the inside, it looks like we can expect a Snapdragon 835 CPU, 6GB of RAM, and 64 or 128GB of storage depending on the model you ultimately choose. Those are identical to what we saw in the original U11, so again, don’t expect much change from an internal hardware standpoint. As always, approach these rumors with a bit of skepticism – we’ll find out for sure what HTC is plotting on November 2.