HP has officially entered into the Chromebook market with their new $329 Pavilion 14 Chromebook. As a laptop, it doesn’t deviate too far from HP standards, and it still sports the same curves and style that you’d expect out of a laptop from the company. Plus, despite being a Chromebook, it feels more like a traditional Windows laptop with it’s fairly spacious keyboard and trackpad, along with the 14-inch display. However, looks aren’t everything, and it’s the internal hardware and performance that can make or break a notebook. Is the Pavilion 14 worthy of a spot on your college laptop shortlist for the upcoming school year? Let’s find out.

The Pavilion 14 — unlike traditional Chromebooks that we’ve seen before — sports a standard laptop design for those that will want something a bit more full-size, but with minimalistic elements. It sports an Intel Celeron processor, which we don’t see too often anymore in laptops, but it’s enough to power a lightweight operating system like Chrome OS. It’s clocked at a mere 1.1GHz, and is paired with 2GB of RAM, along with a 16GB solid state drive, so nothing too spectacular spec-wise, but that was expected. 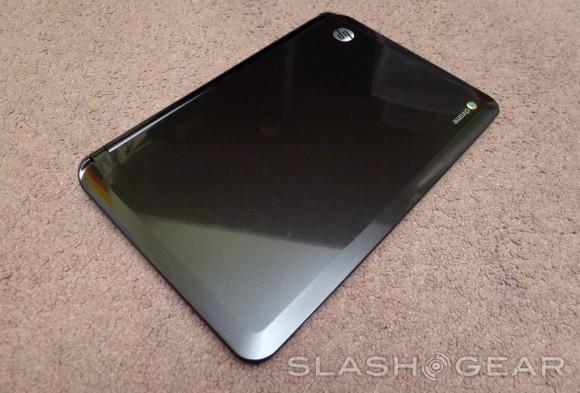 Essentially, if you didn’t notice the Chrome logo on the top corner of the laptop, you would think it was a regular Windows laptop from the face of it. The whole laptop is plastic-laden, and the top has an incredibly-reflective mirror surface that’s a bit of a fingerprint magnet. Opening up the notebook reveals the standard keyboard and trackpad, which aren’t anything special, but the larger size of the laptop makes for more typing room than what other Chromebooks offer. The trackpad is dimpled, adding a comfortable textured feel to your fingers. Unfortunately, using the trackpad isn’t smooth at all, and the cursor ends up skipping around quite a bit. I ended up having to use a mouse most of the time because I found the trackpad to be pretty intolerable. 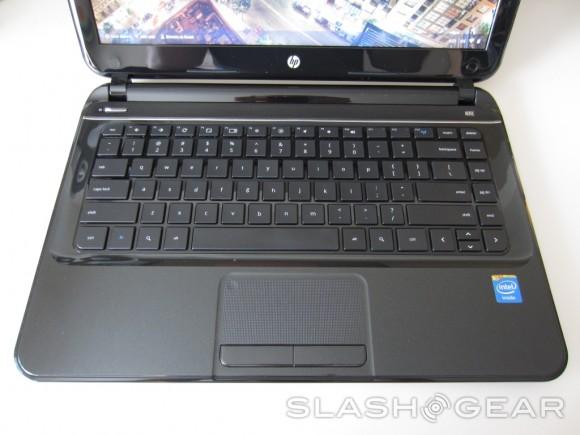 Of course, the main seller for the Pavilion 14 is in the name. The laptop has a good-looking 14-inch display, which makes it one of the larger Chromebooks that we’ve seen, but the relatively low 1366×768 resolution leaves a bit to be desired. Then again, this is to be expected in a budget notebook like this. Connection options are a bit ample, however, with three USB 2.0 ports, an SD card reader, combination audio jack, Ethernet, and even a full-size HDMI port. Sadly, no USB 3.0 on this one, but we can’t be too surprised. There’s also no 3G or LTE chip built in, which we’ve seen in a lot of Chromebooks (as constant internet connectivity is vital to the platform), so you’ll end up having to tether to a smartphone to get internet on the go.

Other than that, there’s no optical disc drive, which is completely fine by us, but those wanting the opportunity to access the occasional disc will have to think twice. However, in this day and age, we’d be surprised if anyone actually needed to use a disc, and it certainly makes the entire package much lighter, coming in at a just bit over 3.5 pounds.

Overall, the design of the laptop feels solid for what you’re paying for, but plastic-built laptops will always have a hint of cheapness, and durability is always a concern in this case. The keyboard and trackpad are pretty cheap, but for the price you’re paying, you can’t expect anything too top tier.

We’ve talked about Chrome OS before in past Chromebook reviews, so I won’t go into a lot of redundant details here, but there a few things to note specifically. First off, the Chrome OS install on the Pavilion 14 is mostly stock, with only an “@HP” icon in the app launcher that takes you to the HP registration page for the Chromebook. 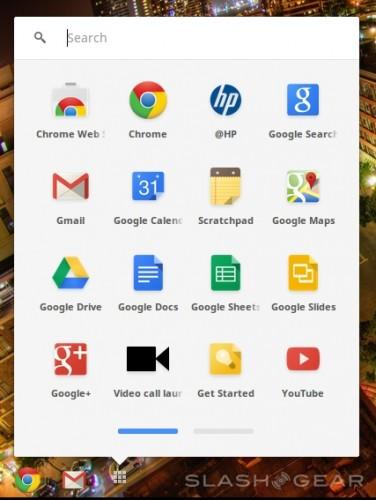 If you don’t know a lot about Chrome OS, it’s essentially just a browser, and while it does have a desktop of sorts, there’s no file browser exactly (just a “Downloads” folder and your Google Drive). You can also download apps, but they’re essentially just web apps that appear in the app launcher on the bottom-left. Clicking on one will simply open the web browser to that web app. You can pin apps to the “dock” of sorts, similar to pinning programs to the taskbar in Windows, and the bottom-right corner is where you can access settings, as well as toggle the WiFi and adjust the volume. 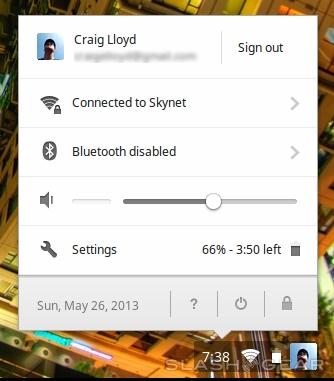 It’s difficult to judge Chrome OS performance using pure numbers, as you can’t really run system benchmarks like you can on Windows and OS X, and since it’s really only a web browser, a lot of the performance is based on how good your WiFi connection is. However, loading web apps was a quick process, despite the slow Celeron processor, and boot-up and shutdown times were extremely speedy. It wasn’t necessarily an instant-on type of boot-up, but it almost felt like an older computer waking up from sleep, taking about five or so seconds to get to the desktop. Shutting down was even a bit quicker, taking only about three seconds to go completely black. 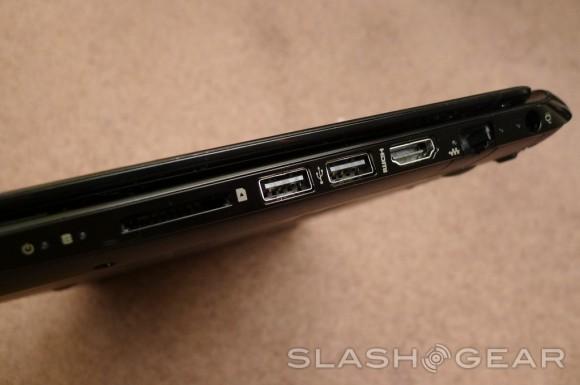 One feature that may bother some users is that when you open the lid, the laptop will automatically turn on. Obviously, this feature will prevent you from having to press the power button, thus saving an extra step, but it was a bit cumbersome when I wanted to open up the laptop to show off the keyboard or trackpad to someone without having the whole thing boot up. I haven’t found a setting that will disable this feature either. 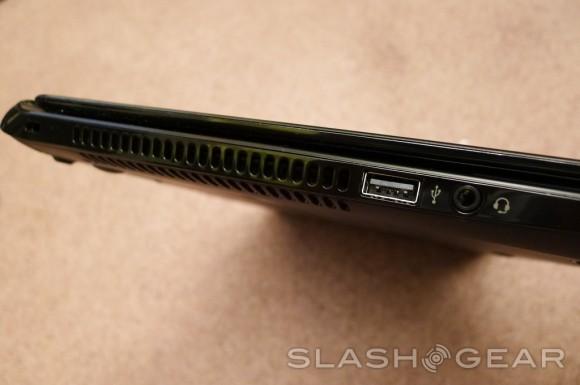 As for battery, HP claims that the Pavilion 14 can last for up to 4 hours and 15 minutes on a single charge, which isn’t very long at all, especially for such a low-powered machine. However, we were getting closer to five hours with light web browsing. Obviously, though, streaming any kind of video on YouTube or Netflix will see the battery life diminish quite a bit (about three hours in our testing), but that’s definitely to be expected. Sadly, though, we were hoping to get at least six or seven hours out of the battery during light use at least, especially since it’s a larger laptop with room for a bigger battery than most Chromebooks, so we were still a bit disappointed to only get five hours, despite exceeding HP’s own battery ratings. 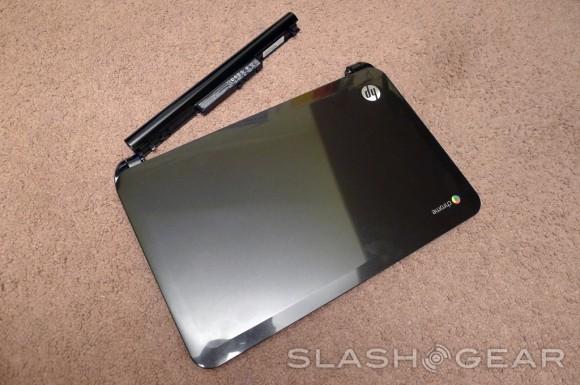 It’s also important to note that even turning off the power completely and closing the lid for overnight storage still eats away at battery life from what we’ve found. We stopped playing around with the laptop for the night when it had around 82% left in the battery. We made sure to completely shut it down for the night, but when we booted it up in the morning, we noticed the battery was mysteriously drained to 72%, hinting to the possibility that the Chromebook actually doesn’t shut down completely without taking the battery out, probably to make sure it boots up quickly without hesitation. 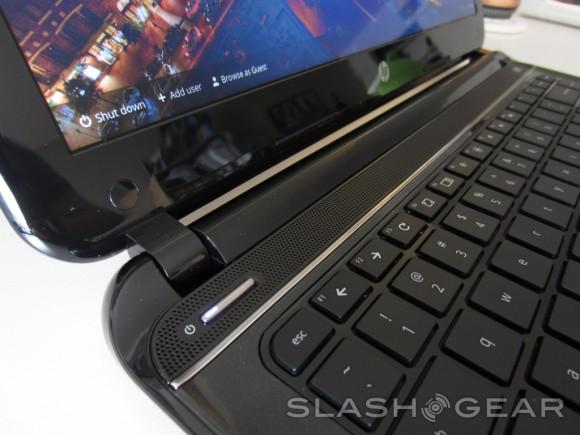 The HP Pavilion 14 is the company’s first stab at a Chromebook, and instead of just mostly copying what Samsung and Acer have done with their Chromebook options, HP made a one-of-a-kind option, with the minimalistic performance and operating system mixed with the look and feel of a standard Windows laptop. However, this isn’t the notebook for everyone. Chrome OS is a very niche operating system, and it’s really only suited for casual users who surf the web, check email, stream media, etc. The Pavilion 14 isn’t the cheapest Chromebook option, but the larger 14-inch display is the real kicker here, and it’s perfect for those that want a lightweight OS in a slightly larger package.