Upon first glance, you might think that the EliteBook 2570p came straight out of 2002, and while first opening it up to get a look at it, I thought I had mysteriously jumped through a time warp that took me back ten years and didn’t even know it. However, as much as I’d like to travel back in time, that wasn’t the case. The 2570p is a business laptop from HP that’s meant for the business-minded road warriors who need durability and reliability when it comes to portable computers. It may not have good looks that will turn heads, but it has enough horsepower on the inside to make any suit wearer happy. Let’s have a look at what the 2570p offers and see if it can be considered a must-have in the competitive business laptop market.

The 2570p is built to last, and it’s somewhat thick structure gives it some ruggedness so that it’ll withstand more than the usual beating. It has a magnesium alloy shell, which should tell you right away that this thing isn’t messing around. Plus, it’s extremely portable, even with it’s added thickness. It’s got a 12.5-inch display with a 1366×768 resolution. Certainly nothing magical in that case, but considering it’s only a 12.5-inch screen, an HD resolution is a welcomed surprise. The hinges connecting the display to the bottom portion of the laptop are made of aluminum, which means you could open and close the lid as much as you want and the hinges won’t weaken one bit, which is a big plus, especially since I’ve seen my fair share of hinges weaken over time. 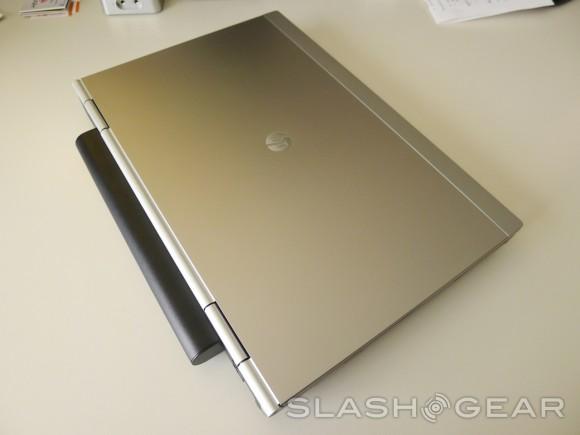 However, while the palmrest and the top outer shell are made of magnesium alloy, the bottom of the laptop, as well as the screen bezel, is made of plastic. Granted, it’s a really durable plastic that’s a bit more sturdy than what you’d find on most other plastic-lined notebooks, but it’s a slight bummer that the entire laptop isn’t encased in the beautiful aluminum that we’re big fans of. Either way, the entire thing weighs about 4.6 pounds, which certainly isn’t bad at all and it makes it easy to stow away in a bag without having to use two hands. However, for a 12.5-inch laptop, 4.6 pounds definitely isn’t light, so don’t expect to be twirling it around in your hands, and while I was able to carry it around and pick it up with one hand, it definitely wasn’t a breeze to do so.

As far as hardware is concerned, the 2570p definitely isn’t messing around, but it’s also not a powerhouse machine. It sports an Intel Core i5 3210M dual-core processor clocked at 2.5GHz with 4GB of RAM, and a 500GB hard drive. This kind of performance will definitely allow you to open apps quickly and browse without a hiccup, and I’ll discuss the overall performance a bit later, but the 2570p only comes with Intel HD 4000 graphics, which will be able to play HD video depending on your player, but don’t expect to do much else graphics wise. 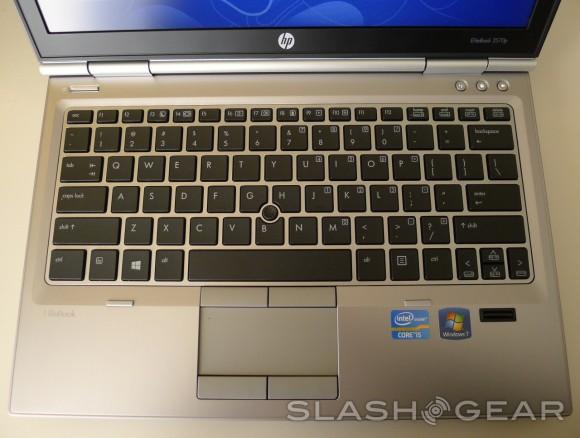 The keyboard is quite impressive. It’s a chiclet-style keyboard and the keys have a DuraFinish coating on them, making them resistant from long-term wear. It’s also spill-resistant, meaning that a small mug of coffee won’t do any damage, but it may leave a sticky mess. Of course, you won’t be able to dump a tall glass of liquid all over the surface, but it can withstand some minor spills if they do end up happening. The keyboard isn’t black-lit, which almost seems like a must nowadays, but the laptop does come with a retractable LED light where the webcam is. It’s not extremely bright, but it works in a pinch. To round out the keyboard, there’s a biometric fingerprint scanner on the right side of the palm rest, just in case you want added some security to your laptop — a subject that many companies are serious about.

As far as the touchpad goes, it’s extremely tiny. There’s not a lot of room to move around your finger to navigate windows and such, but there are several different options that you can choose from. First, the touchpad has top and bottom mouse buttons. Traditionally there only on the bottom of the touchpad on most laptops, but you now have the choice of having them on top, which I actually find more suitable. There’s also a mini joystick in the middle of the keyboard that you can use to navigate the mouse cursor. It takes some time to get used to and I wouldn’t say it’s any better than the touchpad, but it’s there if you want it. 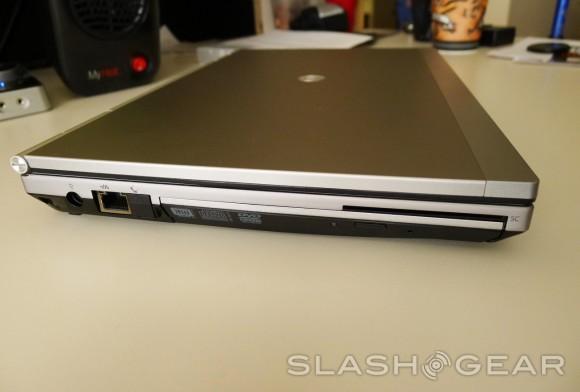 As far as ports go, there’s quite a bevy of them. On the left side is the power jack, Ethernet port, optical drive, and then a smart card reader that may come in handy for a lot of business folks. On the right side, there’s an ExpressCard 34mm slot, SD card reader, dual headphone/microphone jack, DisplayPort jack, eSATA and USB 3.0 port (combined), and a docking connector towards the back. On the back of the laptop, there’s a VGA-out port, one extra USB 3.0 port and a USB 2.0 port. So in all, there’s three USB ports, which is certainly respectable, and along with all the other ports you get, we have to say there’s not a lot that HP left out. Businesses most likely won’t be disappointed by the 2570p offerings.

As far as the 2570p’s display, it’s just a normal LED screen, and there’s no IPS technology included, meaning that viewing angles are extremely limited. This probably won’t be a huge deal for most business users, but it’s at least something that’s worth keeping in mind. I personally didn’t have a problem with it since there was need to view the screen at an odd angle, but if you’re in a business meeting, for example, and need to quickly huddle around your laptop to show coworkers something, it may not be ideal.

The EliteBook 2570p runs Windows 8, which from a business standpoint is a huge downside. Windows 8 has yet to prove to be a solid OS for business use. Personally, it’s an OS strictly meant for consumers, and it no way does it scream, “business.” Granted, when the laptop was first released, it came with Windows 7, but if you plan on buying any laptop anytime soon, it’ll have Windows 8 on it, no doubt. Luckily, if you buy the 2570p directly from HP, you can actually configure the laptop to include Windows 7, so not all hope is completely lost in this case. 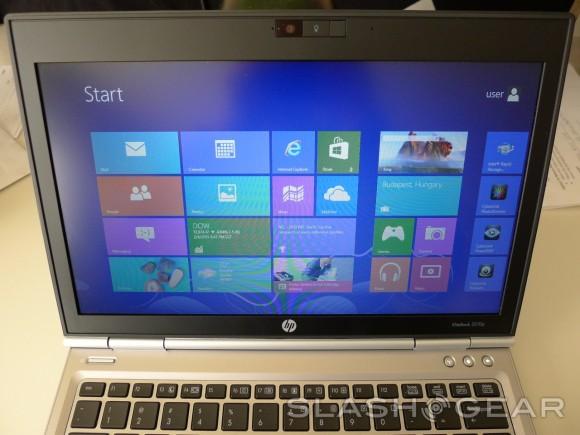 As far as bloatware goes, there’s no shortage of it. It comes with the CyberLink Media Suite, which includes a photo organizer/manager, media player, video editor, and webcam software. There’s also an HP support app, HP Client Security (which uses the fingerprint scanner), and HP’s SoftPaq download manager. Other than that, the computer comes pre-installed with Evernote and PDF Complete, two apps that are proven business tools. 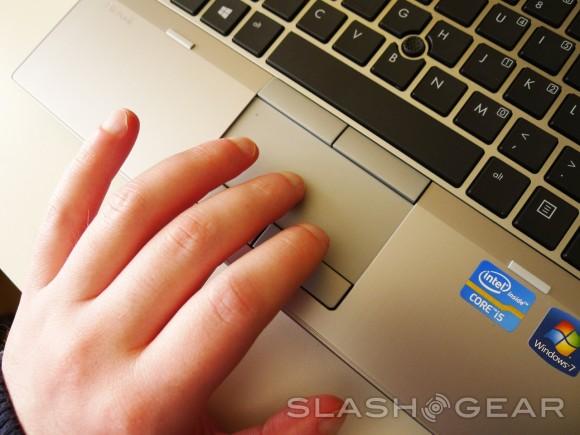 There’s definitely a lot more bloatware than what we’ve seen on past HP computers that we’ve reviewed, but for a business-oriented laptop, that’s not too surprising. My only huge complaint with the software is that it’s Windows 8. I’m not quite sure if PC manufacturers realize that Windows 7 is the business OS that we need to use, or if they’re only concerned about updating to the latest and greatest OS, no matter what. Maybe there are actually some business men and women out there that prefer Windows 8 for their business needs, but it seems that most companies aren’t jumping on the upgrade bandwagon just yet. Again, we’re glad that HP is still giving us the option to stick with Windows 7, but that won’t last forever.

As mentioned earlier, the 2570p comes with a dual-core 2.5GHz Core i5 processor and 4GB of RAM, with integrated Intel HD 4000 graphics. Everyday use proved to be speedy, and while more-intensive apps tended to take a bit longer to load, other apps like Google Chrome, Mail, Calendar, etc. opened up swiftly. However, as expected, benchmarks weren’t anything to write home about, but they also weren’t bad by any means. The 2570p scored just under a 7,000 in Geekbench. Either way, the average user probably isn’t going notice a lot of hiccuping with everyday use. Plus, those business folks that’ll primarily use this type of laptop will mostly use it for documents, spreadsheets, and maybe some video conferencing, but video performance was excellent. Even viewing a 1080p YouTube video wasn’t a challenge for the laptop. It played it nearly flawlessly with little lag.

The really good news is that fan noise remains low most of the time. While streaming video would cause my MacBook to get really hot and force the fans to spin at max speed, the 2570p stayed calm the entire time, and I didn’t even notice the laptop getting too hot at any point. This was probably the most impressive facet of the performance of the laptop. I hate fan noise, and while you can still hear the fans running most of the time, they hardly ever get to the point where they start to sound like jet engines.

As for battery, you’re looking at anywhere from 4-6 hours, and this is from my own testing. Light browsing and document work doesn’t put a lot of strain on the battery, but doing more intensive tasks like video conferencing or watching movies will definitely see a hit on the battery. Of course, screen brightness plays a huge roll as well, and just lowering it down a bit added a good hour of extra battery time for me. 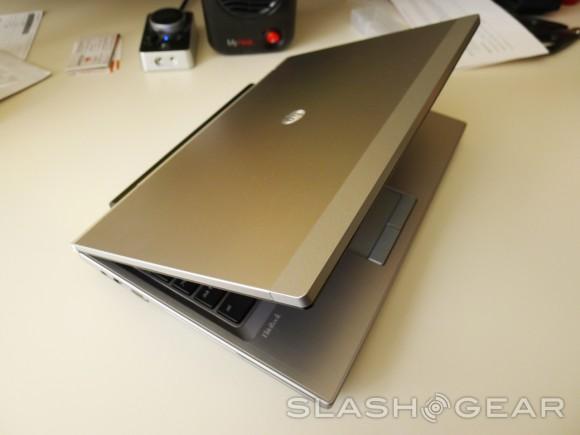 In the end, the EliteBook 2570p is a sturdy, well-built laptop that screams professionalism, and can prove itself out in the field. The Core i5 keeps the laptop humming along nicely, and while the integrated graphics aren’t anything too special, they prove that big things can come in small packages. As far as price, the 2570p starts at $949, which certainly isn’t cheap by any means, so what you’re paying for is ultimately the build quality of the laptop, along with all of the port options along the edges of the notebook. Sure, you could get a laptop with similar specs for slightly cheaper, but the 2570p will last you a long time, and needing a laptop that’s rugged will be well worth the investment that you put into it.