As I write this, I’m watching a group of three guys sit on a couch as one plays through the Illusion of Gaia, an old SNES action RPG that was released way back in 1994. The person playing the game is a speedrunner by the name of Adam “puwexil” Dunn, and his goal is to do a 100% run of the game – which is defined as finding all of Illusion of Gaia‘s 50 collectible red gems in addition to completing the game itself – as quickly as possible.

The estimate for completion is two hours and 30 minutes, but Dunn eventually completes the run with a time of 2:21:34, coming in eight and a half minutes under estimate. The audience behind Dunn erupts into applause as he completes the run and thanks everyone for watching; as he leaves the stage, details are read out of donations from those who have been watching him play remotely via Twitch.

Welcome to Summer Games Done Quick 2016. By the time it ends – on what looks to be early Sunday morning – nearly 200 runners will have taken part in a near-uninterrupted, speed-gaming live-streamed firehose, all in the name of raising money for Doctors Without Borders, the not-for-profit organization that helps people who don’t have access to healthcare.

For the uninitiated, Summer Games Done Quick and its winter counterpart, Awesome Games Done Quick, make for two of the most incredible and inspiring spectacles in gaming. For a full week, speedrunners from around the world flock to one place to run through their favorite games as fast as possible, while both a live and online audience share in their successes and failures.

SGDQ 2016 started on Sunday, July 3rd and likely won’t wrap up until Sunday, July 10th, with runs being streamed, live, every minute in-between. These are events that speedrunning enthusiasts have been passionate about for years, but lately, more and more people from the general gaming community have been tuning in to watch these players of immense skill break games from both past and present.

The amount of talent on display can only be described as out of this world but, as is usually the case, what you see is only part of the story. Curious about the technology behind a gaming marathon like SGDQ, and what it takes to keep such an ambitious stream going, I spoke to SGDQ senior technician Benjamin “UraniumAnchor” Cutler, one of the people on the Games Done Quick team in charge of making sure the play doesn’t stop.

With an event of this size, planning is everything, so it shouldn’t come as much of a shock to hear that Games Done Quick starts preparing as much as a year before it takes place.

“Planning for a marathon usually occurs during the previous marathon,” Cutler explained. “For example, planning for SGDQ 2017 has already started during SGDQ 2016. All the same, he points out, the planning for next year’s event is still very broad and conceptual. 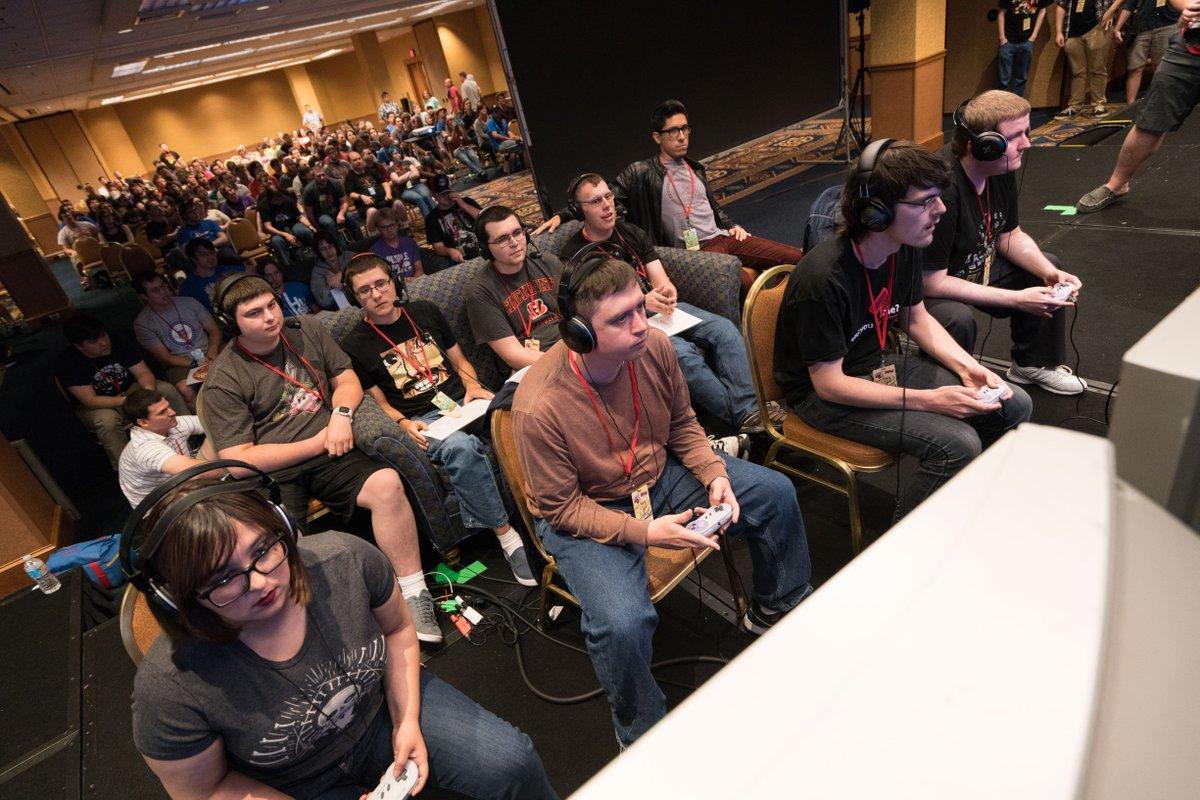 There’s one major advantage to planning one event while another is taking place: the technicians can take note of any technical problems that may come up as they happen, giving them a leg up on next year’s marathon before the current one is even over. From there, plans unsurprisingly become more specific and focused as the event draws nearer. “Months in advance to the marathon we’ll address issues from a more practical standpoint, and research ideas that have popped up.”

One of the most important things is making sure that the live stream of the marathon has as little downtime as possible, which doesn’t seem easy considering that these events are usually held at hotels or conference centers, places that hardly have the best reputation for quality internet connections. Yet, somehow it still happens, with the stream only going down a few times as I’ve been watching throughout the week.

Cutler says that’s because the organization spends a lot of time searching for hotels with suitable connections. “This is one of the most important things to plan for,” the technician explains. “We search hotels far and wide for a stable connection with enough bandwidth to support the stream.”

All the same, despite intensive efforts to avoid PC crashes and stream downtime, problems still inevitably rear their ugly head every once in a while. “The hope is that we’ve done everything we could to minimize these crashes.” 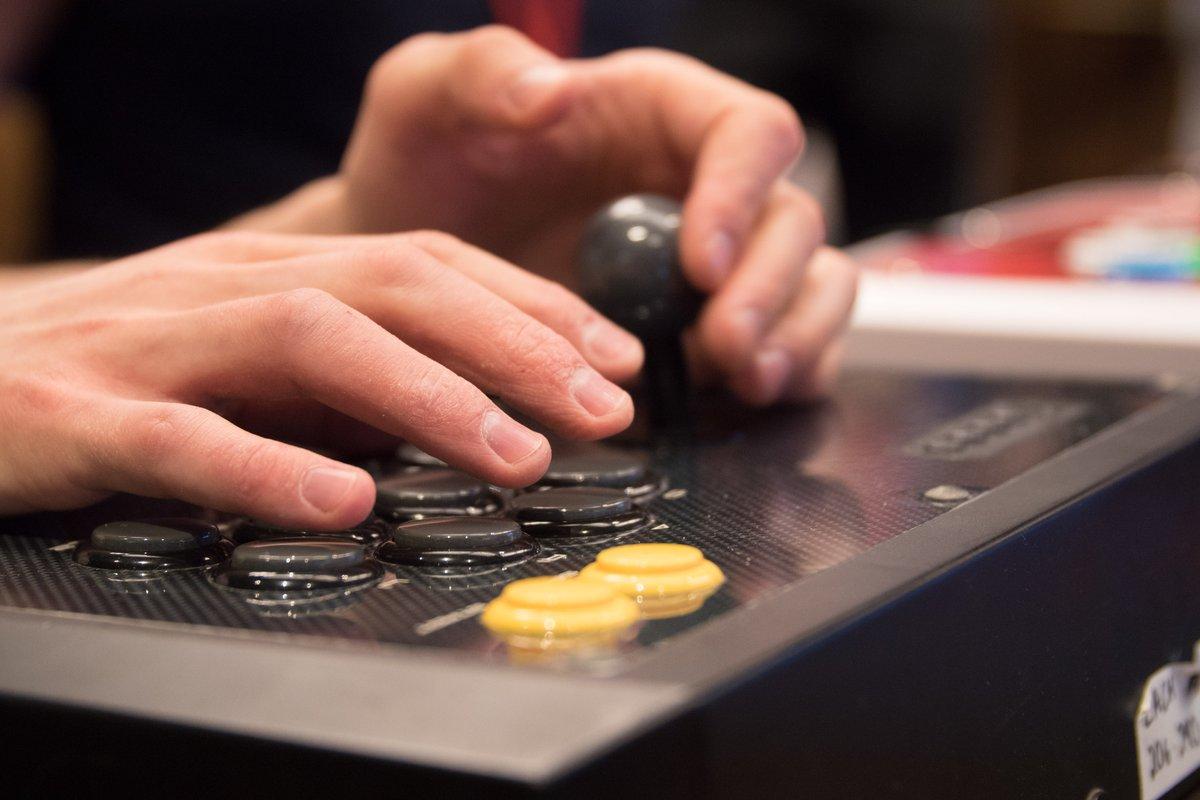 That was once a lot easier than it is today, as these marathons become more popular with each passing year. Back when Games Done Quick first started running events, it was known as Classic Games Done Quick; attendance at that first event was around 20 people. Since then the growth has been dramatic: about 1,400 people attended 2016’s AGDQ and SGDQ marathons. That’s in addition to the online audience, which at any given time hovers between 100,000 and 150,000 viewers.

With this steady rise in popularity, Cutler says that the demands get a little more complicated for each subsequent event. Every decision on the technical side of things is made with the purpose of streamlining the technicians’ jobs while the marathon is in progress, and things like keeping the stream up and running take precedence over almost everything else. Cutler recounts the decision to switch streaming software from Open Broadcaster Software (OBS) to Open Broadcaster Software Studio for SGDQ 2016. Even though OBS Studio is just a newer version of the classic OBS, the decision to implement the switch wasn’t made until the technicians had done months of planning and testing to make sure everything would be running as smoothly as possible when the time came to go live. 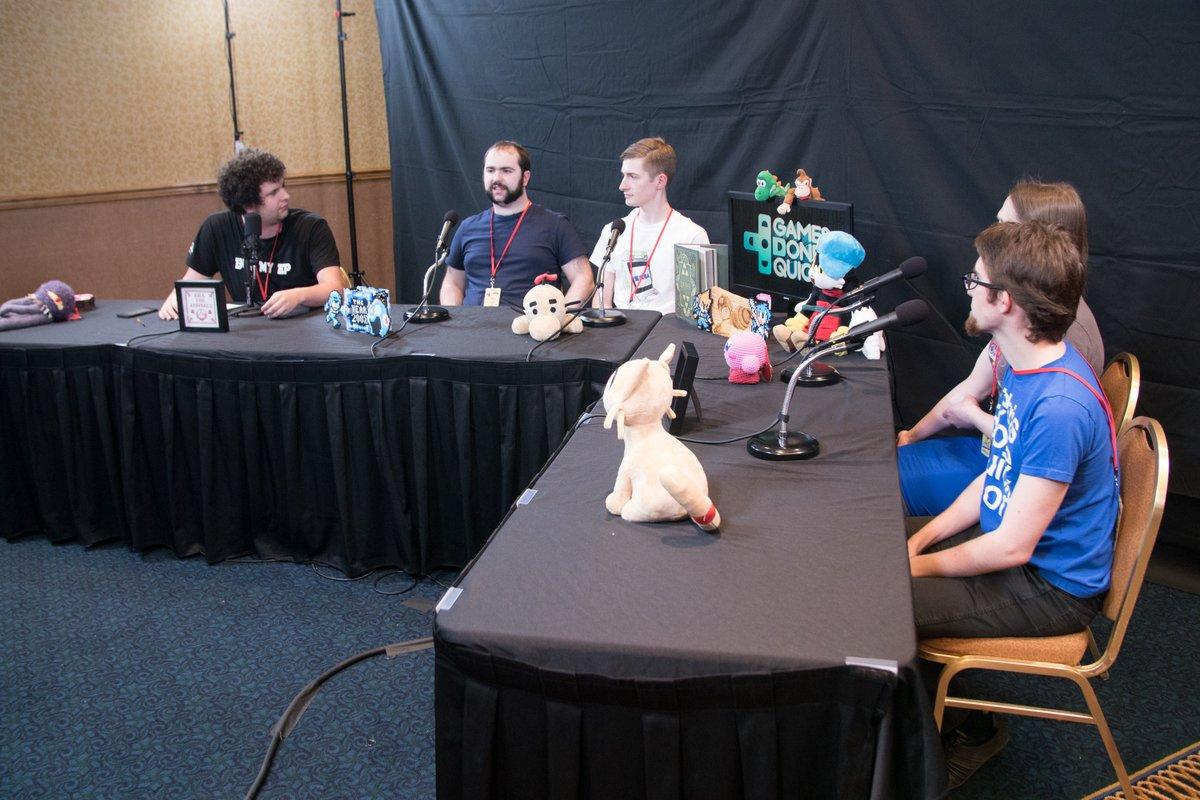 “We’re totally willing to change things up, but changes have to come in a way that reduces the risk of something going horribly wrong while the stream is live,” Cutler points out. “There’s much more leniency with less critical tools like our runner-activated timer button. It’s not the biggest deal if it doesn’t work midstream, because hey, the stream is still up.”

As interest in the marathon grows, so do the equipment demands. Cutler estimates that the Games Done Quick crew utilizes about 100 displays (both CRT and HD) during the event, along with around 20 computers, five cameras, hundreds of pounds of cables, and of course “tons of backups.” Thankfully, Games Done Quick isn’t alone in having to supply all of this equipment, as SGDQ sponsor World 9 Gaming helps stock areas like the practice rooms, where players prepare for their run before going in front of the audience. While most streamers bring their preferred consoles, controllers, and games, World 9 has a stockpile on-hand for those who can’t bring their own.

All of that equipment equates to a setup that takes around four days to complete. Games Done Quick colonizes the main hall and tests the stream in the lead up to the event, while World 9 spreads through the extra practice and casual gaming rooms. Once everything is ready to go, the marathon kicks off, with Cutler saying that there’s a tech team of at least four people on hand at all times. Those four people are the minimum staff required to keep the stream running, and include “two general techs, a producer, and an audio guru from the SGDQ sponsor Power Up Audio, who have done an amazing job with their help in keeping audio solid.” 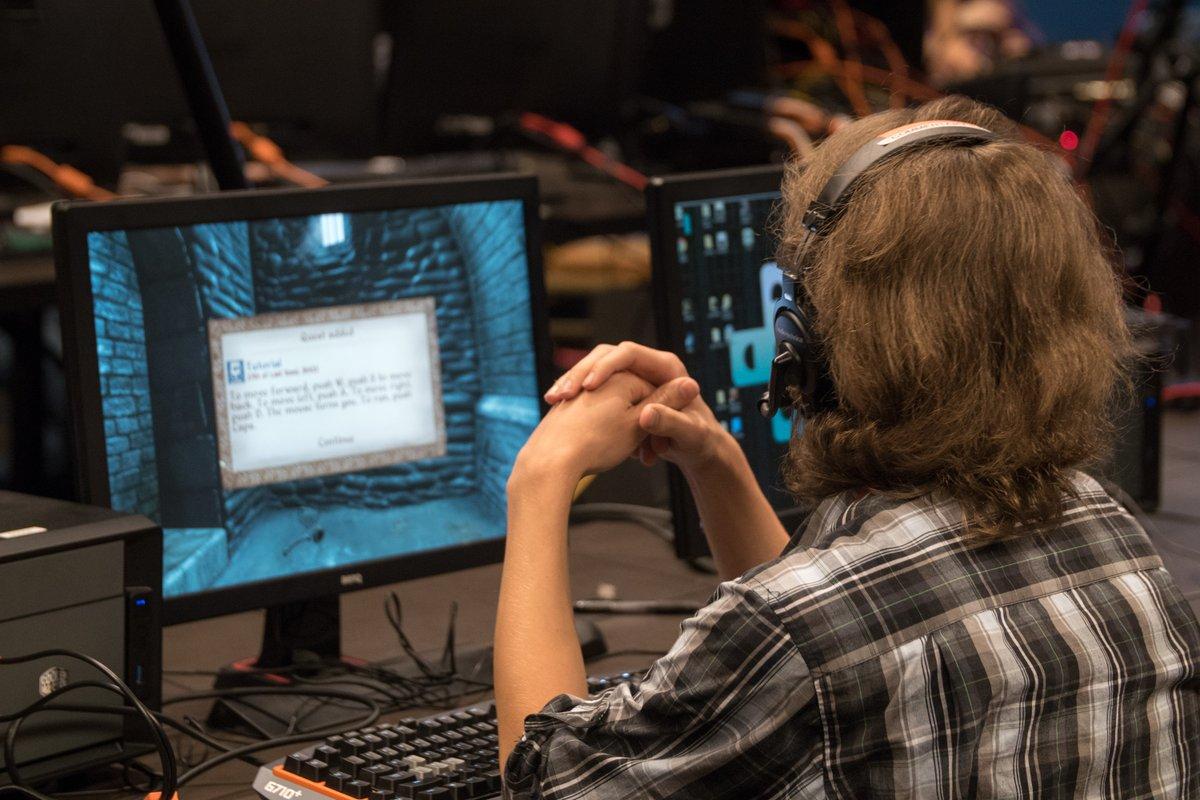 All the same, Cutler says, while having a crew of four people is as low as it can feasibly go, it’s far from ideal, and indeed Games Done Quick tries to avoid having the bare minimum crew on hand most of the time.

“During the very late night or early morning hours we sometimes run with the skeleton crew, but have staff on call, ready to help,” he tells me. “I’d say more often there will be a crew of at least 6-8 ready to help perform transitions, and often other staff in the area or nearby, ready to help as needed.”

After more than a solid week of gaming, Cutler says it usually takes less than 24 hours to break everything down and clear out of the hotel. There’s little time to take a breather, though, as it’s onto planning the next event, which now take place every six months. It’d be a tough challenge for a dedicated team, but is all the more impressive when you consider that these marathons are run by people who are volunteering their time.

Their hard work pays off in big ways, though: GDQ announced during this year’s marathon that more than $7 million has been raised for charity since the marathon first started. As of Thursday afternoon, SGDQ 2016 had $460,000 in the donations box for Doctors Without Borders, a number that – at time of publication – is quickly approaching $600,000.

By the time everything is said and done, the total amount is likely to creep impressively close to the $1 million mark, if not surpass it. 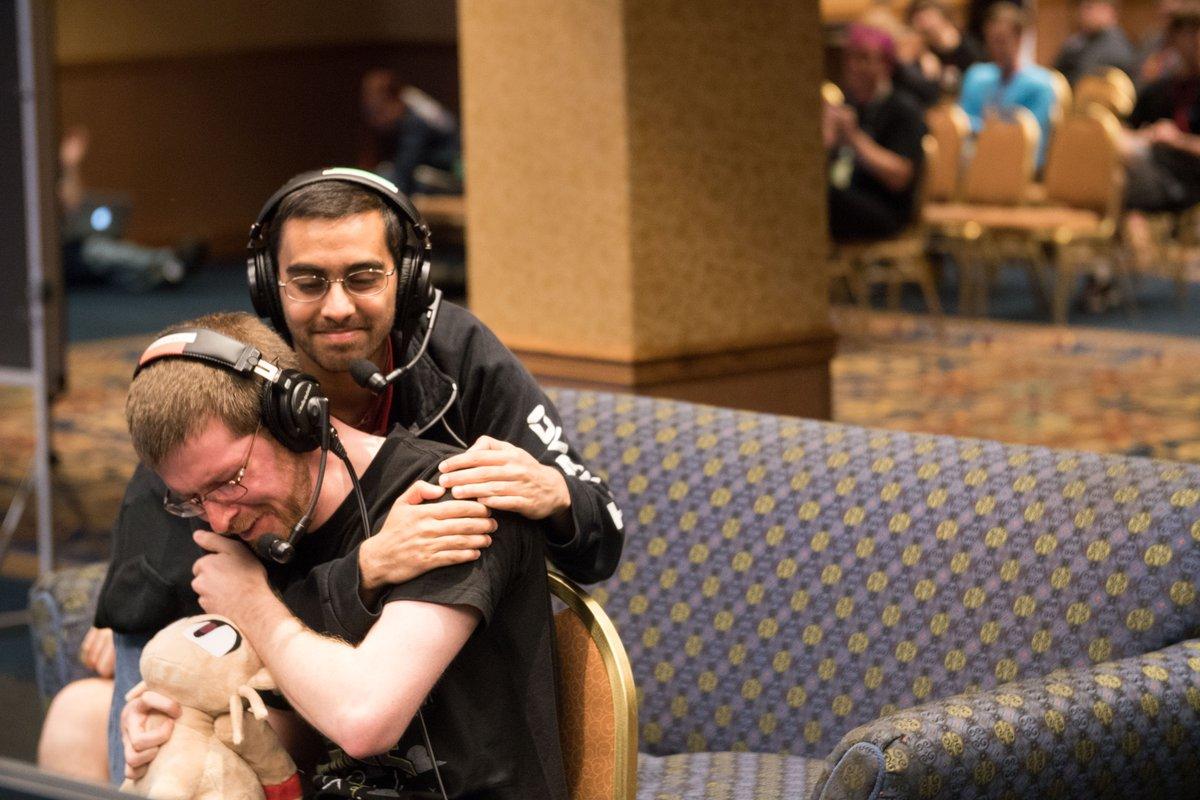 With that much money on the line for charities that will undoubtedly put it to good use around the world, it’s not surprising to hear that so many are willing to dedicate their time to make sure that they put on an unforgettable speedrunning marathon. If it attracts more people to the quickly growing speedrunning community in the process, then that serves as the cherry on top of an already sweet sundae.

Though Cutler doesn’t get much of a chance to relax during the marathon, never mind play a game himself, I had to ask which run he was looking forward to most. His answer surprised even me, someone who has been obsessed with these marathons for years now.

“Pepsiman,” he told me, the low-budget PlayStation game from the late nineties that was as much about encouraging soda consumption as it was gameplay. “It’s… special.”

You can catch Summer Games Done Quick 2016 live on Twitch right now. The donations page for SGDQ 2016 can be found here, along with a list of donation incentives and raffle prizes available to those who give over the course of the marathon.