How Green is Your iPhone?

It’s Earth Day, right? And I’m a dirty hippie. I think about environmental issues a lot. Like many people I like the sound of birdsong more than car horns. I actually spent half of last year canvassing with Texas Campaign for the Environment. We were fighting to improve electronics recycling throughout my home state. Being the gigantic geek that I am, I spent a lot of time learning as much as possible about these issues. Looking forward over the next twenty years our production/consumption/waste cycles are the place where we can do the most good. Dealing with our waste products, whether in the form of gaseous carbon emissions, land-filled garbage, or industrial waste is our generation’s great challenge moving forward into the future. Our friends over at geekaphone released this informative infographic giving you some idea of the scale of this issue as it relates to your iPhone.

In a global economy, the phone you have in your hand was sourced from all over the world. From the mining of the raw materials in the Congo that has coined the term “blood phones”, to the production of silicon chips throughout South East Asia, to the final assembly by factory workers in China, finally through your hands for an average of 18 months, and then most likely to a landfill somewhere in the States.

A person who thinks all the time has nothing to think about except faults, so he loses touch with reality and lives in a world of illusions.

By thought I mean the chattering inside the skull; perpetual and compulsive repetition of words, of calculations, and symbols going on inside the head.

For as a result of confusing the real world of nature with mere signs, such as money, stocks and bonds, title deeds, and so forth. This is a disaster. Time to wake up. – Alan Watts

Now here’s the part that makes me sick and angry. Apple will recycle all of their products for free. Yes, for free. Actually, it’s even better, if you bring some devices in to Apple retail stores, you can get a discount on a new one. And still only 10% of us are even bothering to do anything but chuck it in the trash. That’s ridiculous, wasteful, and just plain stupid, especially in these hard economic times. Many computer companies are offering free recycling programs. There are national coalitions like the Electronics TakeBack Coalition that are pushing for extended producer responsibility to be made law. It already has been made law in a lot of places. 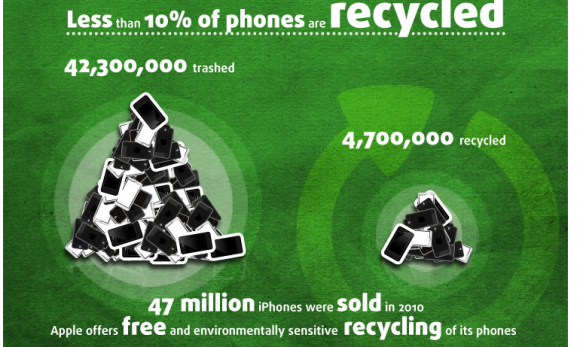 Alright, surf on over to geekaphone to check out the rest of these facts and figures. I would have grabbed more shots to highlight for you, but it’s really worth taking a look at the image in it’s entirely. Really, it’s awesome.