The restored truck has hand painted graphics and has Honda 50 and CB160 motorcycles from the era in the bed. The delivery truck has a half-ton chassis, 8-foot bed, 283 CI V8 engine making 160 horsepower and a 3-speed manual transmission.

The little scooter on the left side of the truck bed is a 1965 Honda 50 known as the Super Cub in other parts of the world and is credited with putting Honda on the map in the early days. The bike has a 49cc single cylinder engine and 3-speed semi-automatic transmission with centrifugal clutch. 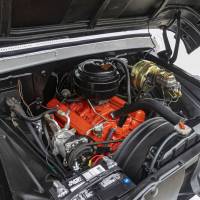 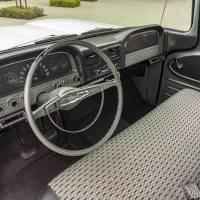 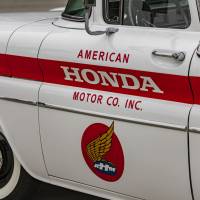 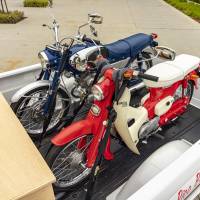 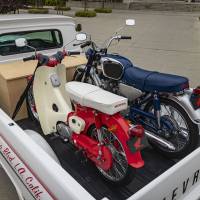 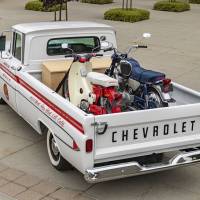 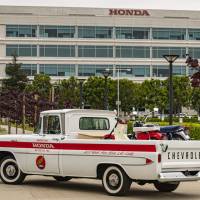 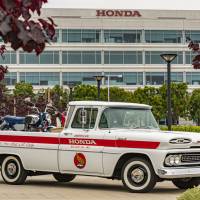 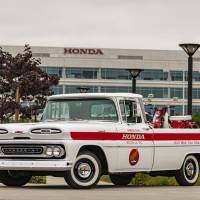 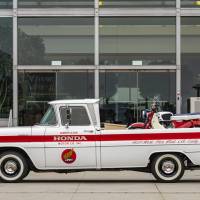 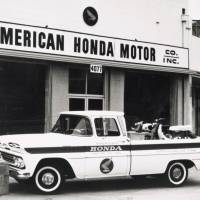 In 1959 American Honda established itself in the U.S. selling motorcycles out of a small storefront in Los Angeles, Calif. Honda has steadily expanded its U.S. presence to encompass a broad range of products and operations. Today, Honda employs more than 27,000 U.S. associates engaged in the design, development, manufacturing, sale and servicing of Honda and Acura products including automobiles, motorcycles, ATVs, personal water craft, power equipment, and an advanced light jet. 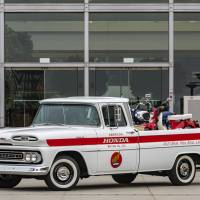 The right side of the Chevy truck bed has a 1965 Honda CB160 and was completely restored. It has a tubular steel backbone, 161cc SOHC V-twin engine, 16.5hp, and a 4-speed manual transmission. The bike also has an electric starter. Honda may have had a humble start in the US in 1959, but by 1965, it was the best selling brand of motorcycle in the country.