Halo: an analog smartwatch with a transparent OLED display

The rise of the smartwatch, especially now that Apple has jumped into the fray, has conventional watch brands somewhat scrambling to join the bandwagon. However, not everyone is willing to buy into how current big players like Google, Samsung, and Apple would like to define what a smartwatch is and how it looks like. Some, like German company Longshine, has ideas of its own as seen in Halo, a smartwatch that tries to combine the best of both analog and digital in a rather unique way.

Almost by definition or by expectation, a smartwatch, since it’s a wearable mobile device, uses a digital display and an LCD or OLED screen. The closest it can get to going analog is to use a watchface that tries to emulate an analog clock, but that is only an illusion. On the other side of the equation are analog watches, pretty much the bastions of timepiece sophistication and design, that are, unfortuantely, quite limited when it comes to displaying and interacting with digital content. In other words, limited at becoming a smartwatch.

Enter Halo, a smartwatch that combines a 100 percent authentic analog watch face and a touchscreen display. How? By using a transparent OLED screen as the glass on top of the analog watch. In its normal operation mode, it looks just like any regular analog sportswatch, though a rather bulky one at that. But simply press a button and a seemingly magical event happens. Icons are display on the screen, which you can then interact with like you would expect from a smartwatch, giving you access to notifications, messages, calls, and other bits and pieces of data that can be gleaned from a paired smartphone. 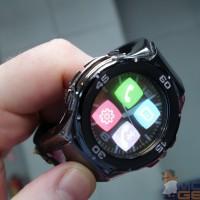 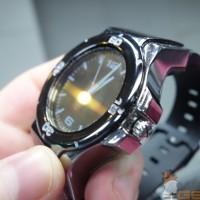 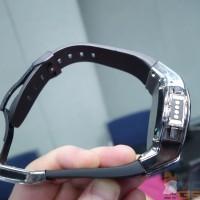 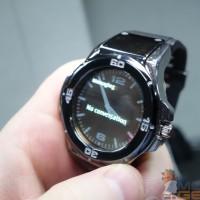 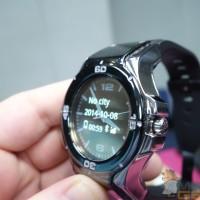 The strangeness of the Halo smartwatch continues inside. It is powered by an Intel XMM 2231, a rare ARM Intel chip that runs at 300 MHz and is designed around Android. That Android, however, isn’t the fresh and new Android Wear but is, instead an almost prehistoric Android 2.3 Gingerbread, and a highly customized one at that. The rest of the specs sounds pretty much like any smartwatch today, with 512 MB of RAM and 4 GB of storage. The display resolution is a dismal 96×96 and the color depth is an even worse 8-bit or a range of 256 colors only. Apparently, this is the trade-off for a transparent OLED screen.

Given what it tries to do, it isn’t surprising that the Halo is bulkier than a sportswatch, but that is probably, or hopefully, a temporary thing. The “analog smartwatch” (finally something you can say) is still at its prototyping stage, so there is still some possibility to refine and slim down the design. As of the moment, there are two models being exhibited. The Halo 1 is your typical smartwatch while Halo 2 adds the element of its own 2G connection for both data and calls. No word yet when or if this will become a commercial product, but it is definitely an interesting concept worth taking further.