In Bump n’ Run mode, impact sensors embedded in the car are used to sense impacts from competitors. In that mode, drivers can crash into each other and earn points for producing virtual damage to competitors. The car supports two different forms of racing including Bump n’ Run and Race the Clock alone or with friends.

The smartphone application also has a built-in lap counter. The car supports a number of different attacks using the impact sensors including Snare that lets the opposing driver reduce their opponents speed. A Randomize attack lets you tamper with their controls, and a Opposite attack flips directions on their steering wheel. 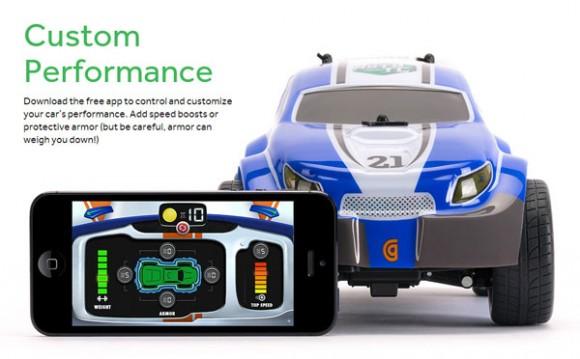 In Bump n’ Run mode the more damage dished out to your car, the harder it is to drive. The application does offer bonuses allowing you to repair damage, add protective armor, and more. The Moto TC Rally is available to purchase now for $99.99. The car requires iOS 6.0 or later and works with the iPhone 5/5s, iPhone 4/4S, iPod touch (5th generation), iPad (3rd & 4th generations), iPad Air, and iPad mini.