Decades ago, the Abarth name was more than a high-end trim level on some Fiat cars. In the 1950s and 1960s, Abarth was the name on some of the winningest racing cars in Europe that ran using various engines from Alfa Romeo, Fiat, and Porsche. Those engines were crammed under the hoods of vehicles using lightweight hand-formed body panels.

The Abarth 1000 SP Roadster is a reimagined version of the race-winning 1000 SP. While the vehicle has been officially announced, there’s not a wealth of detail about it available. We know that it uses a carbon fiber chassis tub, MacPherson strut rear suspension and a mid-mounted turbo four-cylinder engine that makes 237 horsepower.

While it’s not called out, that certainly sounds like the vehicle started life as an example of the now-discontinued Alfa Romeo 4C Spider. The resemblance between the original 1000 SP and the new Abarth 1000 SP Roadster is clearly seen in the image, with the two cars sitting side-by-side in a garage seen in the gallery below.

What’s worth noting for those who’ve never seen the 4C in person is that the car is extremely small. The fact that it is massive compared to the 1000 SP racing car shows how small that classic vehicle really is. The Abarth 1000 SP Roadster uses modern projector headlights meant to be reminiscent of the original racing car’s parking lights. The hood has large horizontal slots remaking one of the most notable design cues from the original racing car. 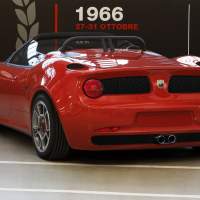 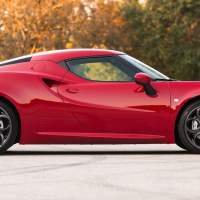 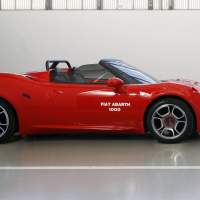 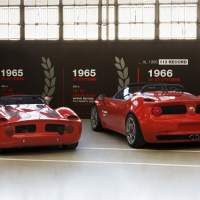