Putting Google‘s latest experimental project to the test, a group of researchers from the University of Pennsylvania equiped a quadrotor drone with a Project Tango demo unit. The goal is to see just how effective the system can be in giving drones and robots in general a more accurate view of our world, and the results are promising.

One could say that Google has an obsession with intelligent machines, from self-learning algorithms it uses mostly in Search and Google Now, to self-driving cars, to artificial intelligence and other robotics fields. In a sense, Project Tango is an experiment that would benefit robots more directly than humans, unless used for rather interesting and entertaining applications. The aim of Project Tango is basically to help a machine go beyond its usual flat, 2D picture of the world around it and see and understand things as they really are, in full three dimensions. It is basically helping machines see things the way we see them and make decisions based on that. And that can be truly seen in this experiment headed by University of Pennsylvania’s Vijay Kumar. 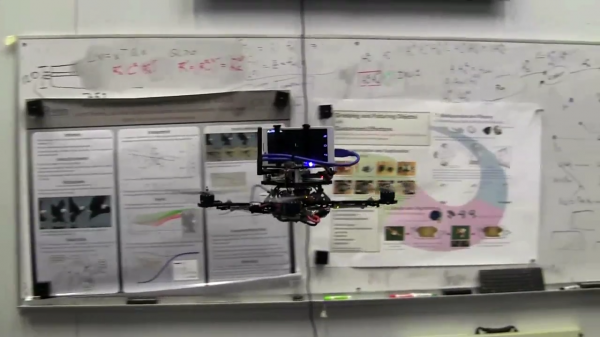 Drones that are normally used outdoors rely on GPS in order to keep track of their position or go to a destination. Indoors, however, GPS is unavailable at worst and inaccurate at best. For such situations, robots would have to resort to location motion tracking the likes of which are provided by companies like Vicon and OptiTrack. These are, indeed, more accurate but also an additional expense that are better suited for professional cases. It also requires putting up sensors on walls where the robot would navigate, which isn’t always an option.

Kumar and his associates thought of another solution: Project Tango. Once the university was able to get their hands on one of those extremely limited units, they integrated it with a quadrotor drone. The drone itself is simply made out of off-the-shelf parts that most hobbyists are able to assemble on their own. In short, no need to buy specialized parts. Using the Project Tango as its eyes, the drone was then able to maintain its position indoors, no matter how much it was displaced from its location. It was also given a target location to go to, in which case it was able to maintain its path despite human interference. The video below shows the experiment done by the group.

It should be noted that the laptop connected to the drone does not control its flight. It is only there to visualize its position and to input a new location. The system uses information from an IMU sensor as well as the pose data from the Project Tango device, which gives not only the current position but also its orientation from a designated coordinate, usually the starting point. Maintaining its position and flying to a certain is spot is all done by the drone alone, without human interaction and despite human intervention. This proves how useful Project Tango can be in giving robots the ability to move and navigate on their own. Google, however, has been quite coy about commercial plans for Project Tango, leaving some question marks about the device’s future.