Now that the Google I/O schedule is here, a lot is being made of little tidbits of info found in the session descriptions. That’s exactly what they’re there for; to get bloggers speculating and fans excited. As we find more breadcrumbs on the way to Google I/O later this month, two early curiosities pop out. First, there’s a single mention of ‘Android M’ in an Android at Work breakout session. Second, a wearable that will “literally” blow our socks off.

Android M is, obviously, the next iteration of Android. We expect Google to discuss some details about what Android M has for us, which will obviously have some very strong enterprise tie-ins.

We don’t know its real name, and we can’t say what else might be involved. It’s entirely possible Google is simply going to make enterprise the focus of M at this point. 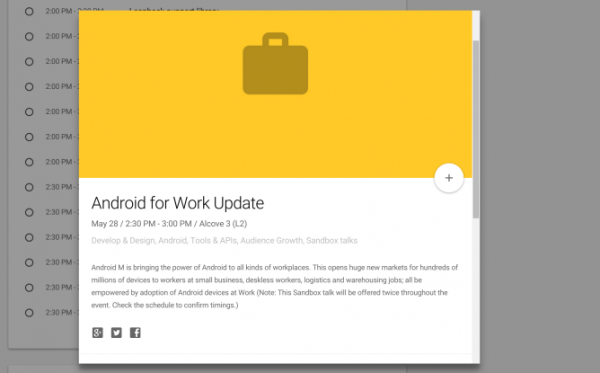 We should also point out the session notes discussing ‘Android M’ are now gone, so it could have just been a mistake.

Wearables that blow our socks off, though? Don’t get too excited. That comes via ATAP, Google’s skunkworks lab. They’ve got something to show off, but we doubt that means anything is coming to market any time soon, if ever. More than likely, they’ve got a demo of something unique meant to inspire. 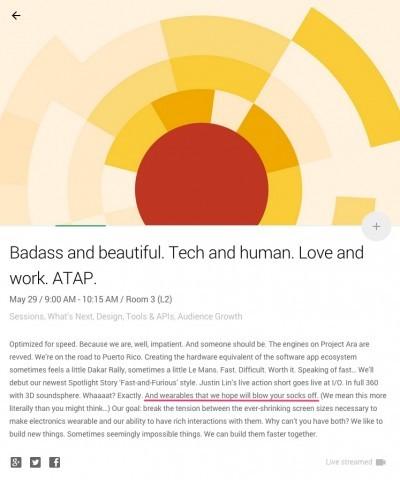 Should you be excited? Sure. Google I/O sets the trend for Android and beyond in the Googlesphere, so it’s a really exciting time for tech enthusiasts. If you thought you’d get a wearable to buy via Google Play or an update would hit your phone during the keynote, though — think again.

Source: Google I/O
Via: The Next Web, Droid Life