Google has been working to bring several of its real-time messaging services under the Google+ Hangouts umbrella. Some screenshots have shown up that indicate Google may be taking things one step further in offering Hangouts users the ability to message mobile users from within Hangouts. Rumors indicate that Hangouts will get the ability to send and receive SMS and MMS messages. 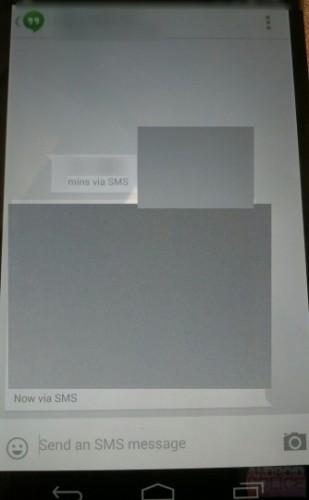 Hangouts already includes one-on-one and group video chatting capability along with standard instant messages. Those features rendered the Google Talk service and application obsolete. SMS integration into Hangouts will allow users to send and receive these messages within the app itself bringing even more capability to Hangouts.

Another screenshot surfaced shows that when you send messages via SMS within the app, they are tagged with the “via SMS” verbiage. That will help people keep track of the various sources of messages they are receiving. There’s also some indication that people will be able to share video via SMS from within the app as well. No details on when these features are planned for the app are available at this point. Considering screenshots have surfaced those features certainly well along in development and could come at any time.