Google+ gets revamped with over 41 new features

Today the folks from Google have been going quite fast here at IO with the news. From Android, Chrome, and more, but now we’re focusing on an area they’ve been giving a lot of attention lately. Google+. Google’s social network is about to get a major overhaul, which users will start seeing later today. They’ve confirmed over 41 new features are coming, as well as a brand new news stream.

Facebook recently overhauled their news feed, and Google+ is about to do the same, only about 10 fold. Live on stage they’re sharing a few of many details, and we’re just getting started. Google+ is slowly but surely becoming the center of attention for all of Google’s services. Comments on the Android Play Store and YouTube can be tied to your social account, and Google Games invites all run through Google+.

So what’s about to change? Well, everything. Mainly the stream, design language, and the way we enjoy news. The stream will be new, and unified across all platforms. Phones, tablets, PCs and more. Instead of a never-ending newspaper they’re going to make the new stream all about “design and depth”. The design has a familiar Google card-style layout, and the depth will be important. 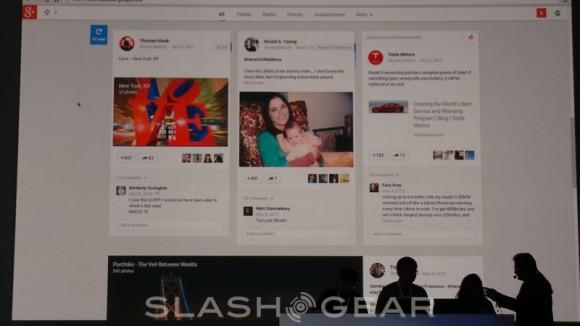 While we’re still waiting for all the details, many of which Google doesn’t have time to announce, they’ve confirmed a brand new photo experience and a new Google Hangout. Which for those who don’t know, are Google’s video calls feature. Instead, Hangouts will be Google’s new unified messaging service from what it looks like. You can have messages with one person, or many. You can do standard messages, or video calling and more. We’ll have more on Hangouts soon. Google Hangouts will be cross-platform too.

Photo’s will still auto-upload, but will now save full 8 megapixel images if you’d like. That means when you share a photo on Google+ it’s bigger and better than any other social network. Stay tuned for more details on the all-new and completely improved Google+, which we’ll be seeing online shortly. Google stated it will be rolling out today, and expect a full review of the new features coming up quick.