A lot of gadgets have passed through the halls of iFixit, getting their turn on the chopping block and having their internal guts dissected. Some of them have been extremely difficult to open up, while others are pretty easy. The Chromecast, on the other hand, is just a piece of nothing if you ask the iFixit folks. They didn’t even give it a repairability score.

Essentially, the Chromecast HDMI dongle is a motherboard with a heatsink, encased in a plastic shell. The shell is fairly easy to open, as it just takes a little bit of prying to get access to the innards. Overall, there just wasn’t much to teardown. After iFixit took off the plastic shell, that was pretty much it.

So why didn’t they give it a repairability score? Well, because there’s nothing to repair. If the device breaks you have to replace the whole thing, unless you’re really, really good with soldering tiny parts together. iFixit calls the Chromecast “a throwaway gadget” thanks to its very small price tag and the fact that you just can’t repair it. 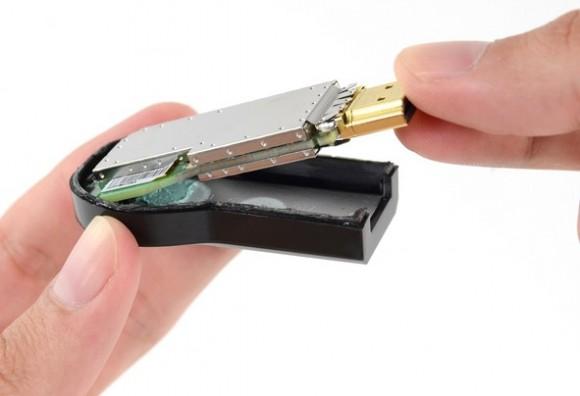 However, that doesn’t mean that the iFixit team didn’t discover some “cool stuff” on the inside. The Chromecast uses an Azure Wave AW-NH387 802.11 b/g/n WLAN, Bluetooth, FM combo module IC, along with a Marvell DE3005-A1 SoC, similar to the Marvell DE3005. It also has 4GB of flash memory and 512MB of RAM.

In the end, iFixit calls the Chromecast “essentially a luxury item with a limited use.” It’s certainly nothing special, and if anything, it’s mostly the price that has folks raging about it. Then again, for $35, it’s a pretty awesome device that can do a lot of neat things, and with the SDK out and about, we can only see the device getting better from here on out.