Google spent a lot of time in the last part of 2012 improving its iOS app offerings through updates, and today we’re hearing that those updates did quite a bit to boost market share. Though many of Google’s apps will of course always be popular regardless of the platform, the company’s iOS apps are looking pretty good going into 2013. Onavo Insights today published a list of the Google iOS apps that saw their market share grow as 2012 came to a close, with YouTube and Google Maps perhaps making some of the biggest gains.

YouTube showed some pretty impressive growth in the final months of 2012, climbing from 20% market share when it was released in September to 44.5% by the end of December. It isn’t much of a surprise that YouTube has become so popular on iOS, considering that it’s far and away the most popular video streaming site on the Internet. If YouTube’s growth is impressive, that makes the rise of Google Maps astounding, as the app launched to 5.7% market share in mid-December and managed to reach market share that was just under 30% by the end of the month. 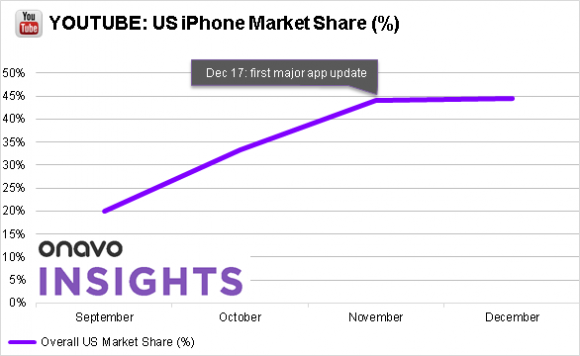 Though Google Search was holding pretty steady over the last half of 2012, Onavo’s graph shows a significant uptick in the app’s market share in the lead up to its October 30 voice update, rising from 14% to 16%. Gmail spent most of the second half in the single digits, but after the launch of Gmail 2.0 on December 4, we see the service begin to climb toward 10% market share. Google Drive was another iOS app to benefit from updates, as it only had a US market share 0.8% in July. That rose to 3.6% by the time December was over, and the fact that Google added all new features to the app on November 28 probably helped with that. 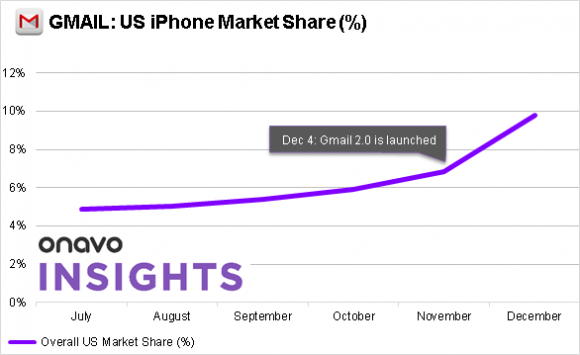 Google Chrome also has an update to thank for a rise in market share, as it was actually suffering a bit of a decline before a November update hit. In October, Chrome’s market share was down to around 7%, but thanks to that update, it has come up to 9.5%. That isn’t bad at all, so it seems that Google has a handful of attractive iOS apps on its hands as we head into 2013. If you’ve got a few minutes on your hands, be sure to check out Onavo’s full report on the state of Google’s iOS apps in the US.