Google today announced its “quick action buttons” for Gmail have expanded to more Google and third-party developers. If you’ve never seen these, quick action buttons are little grey rectangular buttons that appear inline with subject lines in your inbox which you can click or touch to take some sort of action on the contents. For example, if you get a Google Calendar invite, you can RSVP without ever opening the email.

The new quick action buttons now incorporate emails from YouTube, Vimeo, Dropbox, Google Docs and more. Third-party developers who want to add a button to email subject lines sent through their service to Gmail accounts can do so by adding a code snippet to those emails. Developers can get the skinny at the Google developers center.

Quick action buttons are intended to address a variety of concerns for email inboxes, the main one being that inboxes are crowded. Fewer and fewer people open every single email; with the buttons, users can get right to the point, take action, and move on. For example, if there’s a video being shared in the email, users can view it without opening the email. Or if a user receives a flight confirmation, the details can be instantly viewed as an overlay, as seen above. 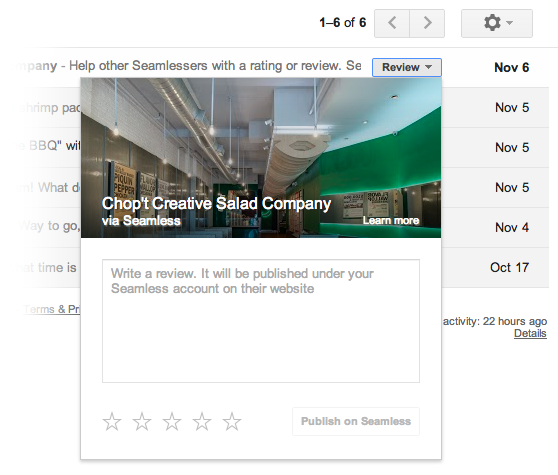 The new buttons also include reviews from Seamless, a restaurant delivery site. Google Docs, Sheets, and Slides are now covered as well. Of course, if you want to view the email contents, you can still do so by clicking the subject line. What do you think? Will this make your Gmail life easier? Or is this just another source of visual noise?